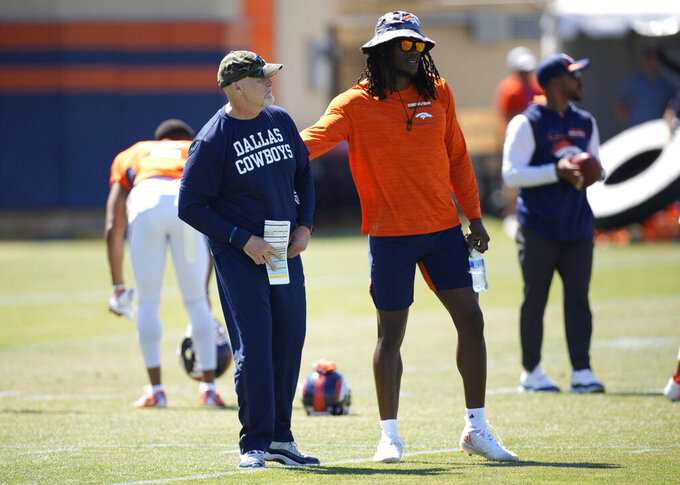 ENGLEWOOD, Colo. (AP) — The reinforcements arrived by the bunches Monday for the Denver Broncos.

They signed veteran linebacker Joe Schobert and activated prized offseason acquisitions Randy Gregory (shoulder) and Billy Turner (knee), both of whom aim to play in the regular-season opener at Seattle on Sept. 12.

“We're trying to get everybody to Week 1," coach Nathaniel Hackett said.

That includes inside linebacker Jonas Griffith, who dislocated his left elbow in the Broncos' 17-7 exhibition victory over the Cowboys on Saturday night.

“We're looking at that four-to-six (week window), so we're going to be right on that fine line there,” Hackett said. “But I know the type of man he is and just looking at him and talking with him after the game, you know, I wouldn’t be surprised if he’s there for Week 1.”

Griffith's injury led to the signing of Schobert, a seventh-year pro from Wisconsin who's played for the Browns (2016-19), Jaguars (2020) and Steelers (2021) and is the only NFL player to amass 600 tackles, 10 interceptions and 10 forced fumbles over the last six seasons.

“Schobert is another experienced guy that we know we can put in there and can play right away,” Hackett said. “He can bring that leadership. He's had lots of years with hundreds of tackles and he's a guy who's played special teams”

Schobert lives in nearby Castle Rock, so he won’t have to worry about any altitude acclimation, either, as he lines up alongside Josey Jewell.

He worked out for the Broncos and other teams earlier this month but missed all of training camp.

“It was a little hard to watch something that you've been doing for the last six years professionally but then I'd go fishing and I wouldn't watch it and I'd be in the mountains will no cell service,” Schobert said.

Gregory is the gem of GM George Paton's 2022 free agent class. He underwent surgery to repair his right rotator cuff shortly after choosing Denver over Dallas in free agency and signing a five-year, $70 million contract.

“It's something I'd been dealing with for two, maybe three years,” said Gregory, who's coming off a six-sack season in his final year in Dallas. “I'd been playing with it for so long, I kind of wanted to fight through it. But I think for the long term it was better for me and for the team.”

Hackett said he and his staff got a chuckle last week as they watched film of the Cowboys in preparation for their preseason opener.

“We put a game on just because we wanted to make sure we knew what they were going to be presenting us, and the whole time it was funny, we’re all looking at each other and going, ‘We’re really happy that guy's on our team,'" Hackett said.

“I mean, he’s a dynamic guy. He's got an unbelievable motor. He is nonstop all throughout the whole play. He's physical. He's fast. He's a smart player. I think all of those things that he brings are so great for our football team and watching him off the edge is something I'm excited to see.”

Hackett was also eager to see Turner back on the field. They were together in Green Bay for the past three years. The versatile 10th-year offensive lineman returned to Denver, where he played from 2016-18, on a four-year, $28 million free agent contract this spring.

Turner is projected as the Broncos' starting right tackle, but he missed training camp while recovering from a left knee injury that goes back to last season.

“Am I mentally ready and prepared” to play in the opener? “I mean, that's what these next four weeks are going to be about for me,” Turner said.