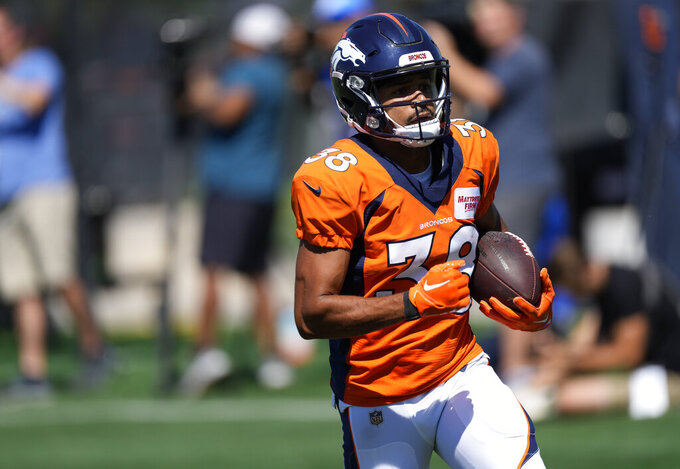 ENGLEWOOD, Colo. (AP) — Darrius Shepherd made a quick first impression Thursday at training camp, hauling in a 60-yard touchdown pass on his first catch with the Denver Broncos.

“It's not a bad start," said Shepherd, who raced past two defenders to haul in backup QB Josh Johnson's deep pass. “It was cool to get out there and make a play on the first day.”

Shepherd, who played for the Green Bay Packers for two years and jumpstarted his career this spring with the New Jersey Generals of the USFL, took the roster spot that opened up when the Broncos' leading receiver, Tim Patrick, was placed on the IR on Wednesday with a season-ending torn right ACL.

Shepherd is a 5-foot-11, 186-pound third-year pro out of North Dakota State who appeared in 14 regular-season games with Green Bay from 2019-20, when Broncos first-year coach Nathaniel Hackett was the Packers' offensive coordinator.

“He's a guy that you can depend on,” Hackett said, “smart, tough guy. We're happy he can come in here and help us out and he's already done some good stuff.”

The familiarity with Hackett's system helps.

“There's a lot of similarities" between the offenses, Shepherd said. “And it's really cool you have a quarterback like Russell (Wilson) come in here and add a little flavor to it.”

Shepherd, who has half a dozen career receptions, played on the practice squads of the Cardinals, Vikings and Steelers last year before signing with the Generals, where he caught 27 passes for 323 yards and a touchdown.

The Broncos also signed free agent running back Max Borghi, a native of Arvada, Colorado, who played at Washington State, to replace running back Damarea Crockett, who blew out a knee about an hour before Patrick got hurt Tuesday.

“I just want to play and I want to be in Denver,” said Borghi, who attended the Broncos' training camps as a kid and counts among his best childhood memories the championship parade after Super Bowl 50 six years ago.

“I want to show them I can do it all,” Borghi said. “At Washington State, I'm sure they saw my career, I was a little bit of a receiver, a little bit of running back and I think I fit real well into this system.”

Borghi is hoping to follow in the footsteps of Phillip Lindsay, another undrafted Colorado native who starred briefly for the Broncos a few years ago.

“We talk and he's definitely giving me a lot of pointers on how to stick and what to do,” Borghi said. “And we saw the Pro Bowl he made and how he came up from being an undrafted free agent.”

Borghi and Lindsay trained together this summer while both awaited NFL opportunities. Borghi signed with the Indianapolis Colts, but they released him less than a week later and signed Lindsay.

“It's just crazy random,” Borghi said. "I mean, there's probably a good amount of running back free agents and the one who happened to take my job was my boy. It's the business. But I just want the opportunity to show what I can do.”

Notes: WR Tyrie Cleveland is still out after getting hit in the throat earlier in the week. Hackett said he'll be fine but he addressed the nature of Cleveland's injury for the first time Thursday, saying, “There’s a little cartilage thing going on there, so it’s a little bit unique. I’ve actually never heard of it before."