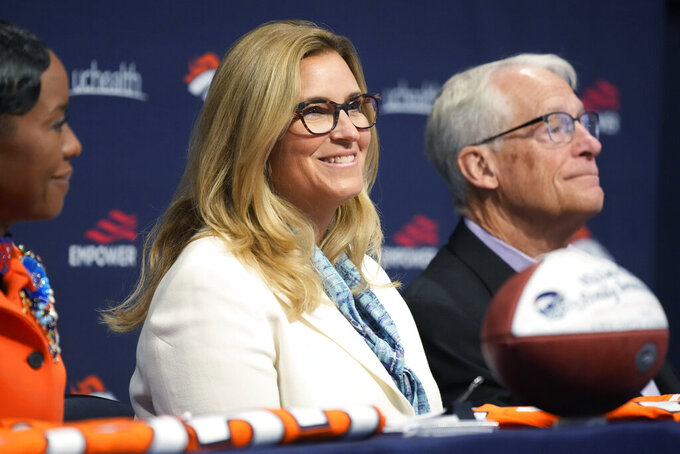 ENGLEWOOD, Colo. (AP) — The Denver Broncos now sport the wealthiest owner in the NFL and the league's most diverse ownership group.

Four of the six members of the Walton-Penner ownership group, which was welcomed into the NFL this week, are either women or minorities.

Walmart heir Rob Walton, the oldest child of Walmart co-founder Sam Walton, bought the Broncos along with his daughter, Carrie Walton Penner, and her husband, for $4.65 billion, a global record for a professional sports franchise.

Walton said Wednesday that his son-in-law, Greg Penner, will serve as CEO of the team. Penner said he'll soon hire a team president. Those roles had been held by Joe Ellis, who is staying on this year as an advisor.

Penner said he'll be the point person “but this is an incredible group. We're going to draw on all of them.”

The ownership group includes limited partners Mellody Hobson, Condoleezza Rice and Lewis Hamilton. Hobson is CEO of Starbucks, Rice is a former U.S. Secretary of State and Hamilton is the winningest Formula One driver in history.

Walton thanked Ellis for his 27 years of service and paid tribute to the late Pat Bowlen. He purchased the team in 1984 for $78 million and died in 2019, a month shy of his induction into the Pro Football Hall of Fame.

“Pat Bowlen built a great legacy and a record of winning and championships,” Walton said. “We plan to do everything we can to build on the championship tradition of this great organization. ... Simply put, it's an honor to steward this historic franchise. Our No. 1 priority is putting a winning team on the field to win Super Bowls.”

Before Walton's group purchased the Broncos, the NFL's wealthiest owner was Carolina’s David Tepper, whom Forbes estimates has a total net worth of $16.7 billion. Walton’s estimated net worth is $60 billion.

“We wanted to add people that brought different perspectives and experiences and certainly we have that here,” Penner said. "Lewis, being the G.O.A.T. (greatest of all time) Formula One driver, Dr. Rice with all of her experience in politics and academics and world affairs, Mellody, as a you know, an incredible businesswoman and her track record there.

“We’re big believers in bringing together different perspectives and experiences and backgrounds and that we think will make us more successful.”

All but Hamilton, who is still in racing season, gathered at team headquarters a day after NFL owners unanimously approved the sale Tuesday in Minnesota. The Broncos new ownership group met with staff and players before practice, and star safety Justin Simmons said he was proud to see so many faces of color.

“To see some diversity and to see strong, Black women in the ownership group, I mean, what an inspiration for so many people," said Simmons, who is biracial. "There's little girls out here whose dads play on the team and they can look up at the ownership of the Broncos and they can see someone that looks just like them. I think that's really great.

“But I think the biggest thing on top of that is they didn't just do that to do that,” Simmons said. “I mean, these are really powerful, qualified individuals that deserve this, earned this, worked for this. And that to me is inspiring.”

Hobson called it “such an honor and a privilege to be an owner of this remarkable organization. ... The moment is humbling and it's historical, and yet, I feel at home.”

Hobson said when she was first approached about joining the ownership group, she encouraged Walton to also bring aboard her friend Hamilton.

“Lewis is my chosen little brother,” she said. “As soon as this opportunity came up, I said, ‘You have to have Lewis.’ I met Lewis in his rookie season as an F1 driver. We bonded over time. As many of you know, he was knighted by Queen Elizabeth and I call him, ‘Sir Little Brother.’

“He has this winning mentality not just on the track but in everything that he does. He cares deeply about people, about our planet and as the first and one (Black F1 driver) in his sport, about diversity, equity and inclusion.”

Rice, who grew up in Denver, joked that her late father John Rice Jr., who was a minister, dean of students at Stillman College and big football fan, “has to be thinking, ‘She finally got a really important job.’”

Penner, who said he doesn't anticipate bringing aboard any more limited partners, demurred when asked if John Elway or Peyton Manning would be involved with the team going forward.

The new owners met with both on the field Wednesday. Elway told The Associated Press earlier this year that he'd like to advise the new owners to help them in their first year.

“We're just going to learn from both of them," Penner said. "I think it's going to be a really good relationship.”

While saying he was thrilled that GM George Payton acquired quarterback Russell Wilson this spring, Penner gave no timeline for a contract extension that's expected to be worth about $260 million over five years.