Broncos' Wilson ready for some love after hostile homecoming 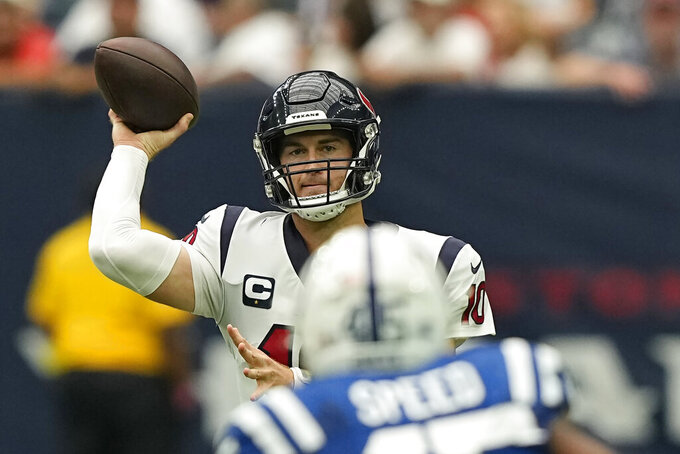 DENVER (AP) — Russell Wilson relishes the thought of taking the field Sunday for his Denver debut when the Broncos host the Houston Texans at Empower Field.

Especially after his harsh homecoming in Seattle that was packed with vitriol and void of any video tributes for the man who led the franchise's only championship parade.

“I'm sure excited to play here at home,” said Wilson, who had to settle for leading the Broncos (0-1) onto the field during a pair of preseason games, which he watched from the sideline in full pads and eye black.

“I’ve obviously gotten to experience the home energy during preseason and running out for the first time, but this is going to be a monumental moment, in a way, for me,” Wilson said.

Traded from Seattle for three players and five picks, Wilson signed a massive contract extension that included a $50 million signing bonus before he even took his first real snap for the Broncos.

That came in Seattle, where the Broncos bungled their way to a 17-16 loss despite a big game from Wilson, who was mercilessly booed from start to startling finish.

The decibels were highest after rookie head coach Nathaniel Hackett's widely panned decision to opt for a 64-yard field goal attempt by Brandon McManus rather than let Wilson go for it on fourth-and-5 from the Seattle 46 in the final minute.

“I just wanted to show him that we love him,” Bolles said. “Going home, going into a hostile environment like that, being there for so many years, you're definitely going to have feelings and emotions. So I wanted him to know that we have his back and I wasn't going to let him walk off that field by himself.

“Now he can come here to Broncos Country and feel the love instead of the boos," Bolles added. "It's going to be a special moment for him.”

Texans coach Lovie Smith had some rather recent game film to review as he developed his defensive game plan for Sunday — Wilson led the Seahawks to a 33-13 win at Houston last December.

“Experience of being in that situation, of seeing him on the other side, game planning for him, it doesn’t matter where you are, the person doesn’t change a lot," Smith said. “Maybe some of the calls have. I see a similar offensive attack when we played the Seahawks last year. Nowadays, quarterbacks have a big say in what teams do, especially guys that have been around the game for a while.”

Wilson didn't have much of a say in how things ended Monday night in Seattle, and he vowed to speak up next time Hackett considers taking the ball out of his hands in a game-defining moment.

“(I) always trust his decisions and everything else, but I’m also always ready to go try to do it if we need to,” Wilson said.

Either way, the Broncos insist they've moved on.

The Broncos will be without Justin Simmons for the first time since 2017 after the star safety injured a thigh in the opener. Second-year pro Caden Sterns replaces the ironman who has started 66 consecutive games.

The Texans got big contributions from two new faces in Week 1. D-lineman Jerry Hughes, who spent the last nine seasons in Buffalo, had two sacks, an interception and a forced fumble in a 20-20 tie with Indianapolis. O.J. Howard, who signed Sept. 2 after his release by the Bills, became the third tight end in NFL history to catch a pair of TD passes in his first game with his new team.

The Broncos are glad two veterans are already off to good starts after an injury- and disappointment-filled 2021 season. Bradley Chubb collected two sacks in the opener after getting shut out last year and Jerry Jeudy's 67-yard TD catch was his first in 18 months.

The Texans are focused on getting their running game going after managing just 77 yards in their opener, which was less than the league-low 83.6-yard average they posted last season. Rookie Dameon Pierce won the starting job but was held to 33 yards on 11 carries by the Colts.

Letting Russ cook or Brandon kick? It's not clear which way Hackett would go next time.

Although he acknowledged a day later he shouldn't have tried the 64-yarder, he spent more time explaining and defending his decision that perplexed so many, including Peyton Manning, who frantically called timeout 62 times on his Manningcast before the Broncos stopped the clock and McManus trotted onto the field.