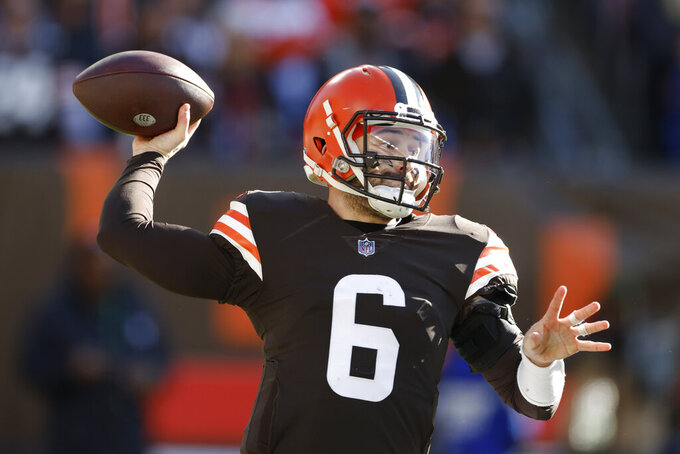 Cleveland Browns quarterback Baker Mayfield throws during the first half of an NFL football game against the Baltimore Ravens, Sunday, Dec. 12, 2021, in Cleveland. (AP Photo/Ron Schwane)

CLEVELAND (AP) — Baker Mayfield moved a step closer to playing against Aaron Rodgers on Christmas as the Browns activated their quarterback from the COVID-19 reserve list Friday before leaving for Green Bay.

Mayfield has been out since testing positive on Dec. 15, one of a slew of virus cases the past two weeks for the Browns. He missed Monday’s game against Las Vegas as Cleveland started third-string QB Nick Mullens, numerous backups and lost.

Mayfield hasn’t practiced in nearly two weeks, but coach Kevin Stefanski, who returned earlier this week after his second positive test in two seasons, said Thursday he anticipated Mayfield starting against the Packers (11-3) as the Browns (7-7) try to bolster their flimsy playoff chances.

The virus continued to wreak havoc across the league, forcing teams to make adjustments in the season’s final weeks.

Indianapolis All-Pro guard Quenton Nelson and Jacksonville pass rusher Josh Allen were the most notable new names to go on reserve/COVID-19 lists that seem to change by the minute.

Losing Nelson is a major blow to the Colts, who are hoping to stay in the AFC South race and play at Arizona on Saturday.

Mayfield won’t be cleared until Saturday, when his 10-day quarantine expires. He won’t have to produce a negative COVID-19 test, something he hasn’t done despite being asymptomatic and feeling fine.

Per NFL rules, Cleveland was required to put Mayfield on its roster by 4 p.m. in order for him to be eligible. He’ll travel to Wisconsin separately from the team.

Along with Mayfield returning, the Browns will break in a brand new kicker against the Packers and will be much closer to full strength.

Struggling Chase McLaughlin, who has missed five of his last 11 field-goal tries including a critical 47-yarder in the 16-14 loss to the Raiders, was placed on the COVID-19 reserve list shortly before departed Cleveland.

McLaughlin’s job appeared in jeopardy after his crucial miss, but Stefanski was planning to stick with him before his positive test.

Rookie Chris Naggar was elevated from the practice squad to kick against the Packers.

The Packers activated Pro Bowl defensive tackle Kenny Clark from the reserve/COVID-19 list after he was unable to play Sunday in a 31-30 victory at Baltimore.

In addition to Allen, the Jaguars (2-12) will be without receiver Laviska Shenault and guard Ben Bartch for Sunday’s game against the New York Jets after the trio went on the COVID-19 list.

Allen's unvaccinated and will be out at least 10 days, according to current NFL protocol. He also will miss the team’s Jan. 2 game at New England.

The Jets, who have been hit hard this week by the coronavirus, activated wide receiver Jeff Smith and special teams ace Justin Hardee from the COVID-19 list — making them eligible to play against Jacksonville.

New York still has 18 players on the list who are either on the active or practice squad rosters, or injured reserve.

Jets coach Robert Saleh also remains out after testing positive earlier in the week. He needs two negative tests to be cleared to coach the game. If not, tight ends coach Ron Middleton will handle Saleh’s duties.

The others added to the list on Friday were right tackle Ryan Ramczyk, reserve running back Dwayne Washington, and safety J.T. Gray, who was selected for the Pro Bowl as a special teams player.

Buffalo placed Gabriel Davis on its reserve/COVID-19 list, leaving the Bills without another key receiving threat for Sunday’s big game against the Patriots. Slot receiver Cole Beasley also is on Buffalo’s list.

Davis had two touchdowns and a season-high 85 yards receiving in last weekend’s 31-14 win over Carolina, filling in for Emmanuel Sanders after he was sidelined by a knee injury. Sanders is in position to return after he practiced fully on Thursday.

Buffalo (8-6) is right behind AFC East-leading New England (9-5), but has the tiebreaking edge to clinch its second division title by winning its final three games of the season.

Ford was starting in place of Jon Feliciano, whose status is uncertain after he was placed on the list on Sunday.

Lewan was scratched from Tennessee’s 20-17 win over the 49ers on Thursday night because of an injured back.

But the Titans activated WR Dez Fitzpatrick and defensive back Jamal Carter off the COVID list. Carter is on the practice squad/injured list.