Browns in desperation mode after ugly loss to Dolphins 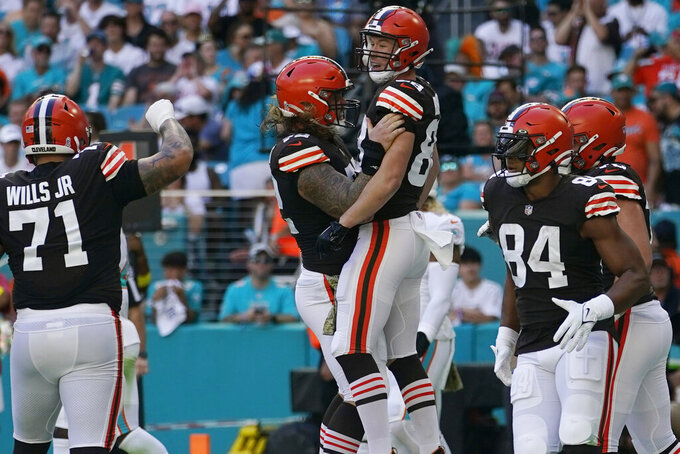 Cleveland Browns tight end Harrison Bryant (88) is congratulated by his teammates after scoring a touchdownduring the first half of an NFL football game against the Miami Dolphins, Sunday, Nov. 13, 2022, in Miami Gardens, Fla. (AP Photo/Lynne Sladky)

MIAMI GARDENS, Fla. (AP) — Myles Garrett still believes the Cleveland Browns can make the playoffs, even after Sunday’s 39-17 loss to the Miami Dolphins dropped them to 3-6.

“It’s difficult, but it’s not impossible,” the All-Pro defensive end said. “We’re going to go out and play every game like it’s our last because it might as well be. Do everything we can.”

Cleveland was coming off a 32-13 blowout of division rival Cincinnati and had the NFL's third-best rushing attack. But the Browns could be in desperation mode for the rest of the season after they struggled on both sides of the ball against the Dolphins.

The Browns were held to a season-low 112 yards rushing and 297 yards of total offense, and they allowed Miami's 29th-ranked rushing offense to compile a season-best 195 yards.

The Browns are third in the AFC North behind Baltimore and Cincinnati. Cleveland will play five of its next eight games on the road and has two games left before quarterback Deshaun Watson is eligible to return from his 11-game suspension for alleged sexual misconduct involving two dozen women.

Watson can return to practice Monday and will be eligible to play on Dec. 4 at Houston, his former team.

“We’ll talk about that next week,” Stefanski said when asked about Watson's return. “Biggest thing for us is just making sure we fix the things that need to be fixed.”

Until then, Jacoby Brissett will be at the helm for games against Buffalo and Tampa Bay that could decide whether Cleveland can salvage its season.

Brissett was 22 for 35 with 212 yards and one TD as the Dolphins' defensive front kept him under pressure, sacking him three times. He had a 38-yard pass to Donovan Peoples-Jones on the Browns' opening drive that set up their first score.

“We’ve got plenty of time,” Brissett said. “This season, it goes fast, but when it clicks, it clicks. We’ve got another opportunity coming up next week and looking to put a better performance out there.”

Nick Chubb, who entered the game as the NFL’s second-leading rusher, had a 33-yard rushing touchdown in the fourth quarter, but aside from that play he had 30 yards on 10 carries. His 63 yards rushing were his second fewest in a game this season.

“That’s part of our game is to be able to run the ball. Obviously we weren’t as successful as we wanted to be in that area,” Brissett said. "But I know the guys in that room. I know the guys up front. I know our coach, O-line coach, running back coach, quarterback coach. I know the coaches in that room. We’re going to go and watch the film and correct it and be better from it."