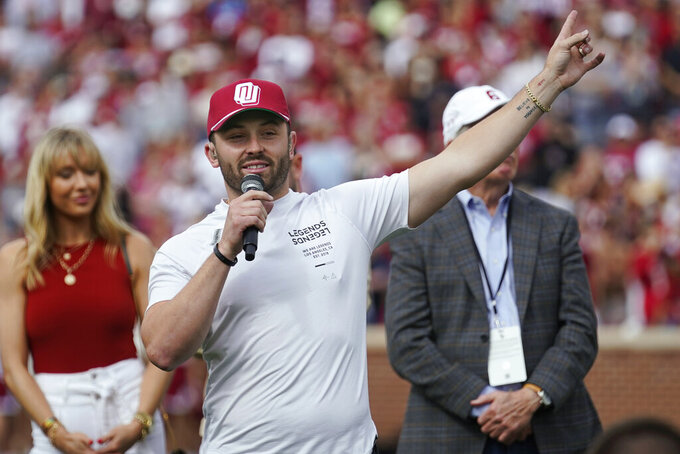 Former Oklahoma quarterback Baker Mayfield gestures to the crowd from midfield during events for the dedication of a statue of him outside Gaylord Family Memorial Stadium, during halftime of Oklahoma's NCAA college football spring game Saturday, April 23, 2022, in Norman, Okla. (AP Photo/Sue Ogrocki)

Cleveland closed the first night of a three-day event that started with a bevy of trades across the league still stuck with a quarterback looking for a fresh start somewhere else.

Without a first-round pick this year after trading it — along with first-rounders in 2023 and 2024 and six selections in total — to Houston for QB Deshaun Watson last month, the Browns' priority at the start of the draft was to trade Mayfield, the No. 1 overall pick in 2018 and their starter the past four years.

So far, no takers.

There were nine trades during a wild first round in Las Vegas, but none of them included the Browns, who made their big splash a month ago.

General manager Andrew Berry said last week it was unlikely the team would jump into the first round, and Cleveland lacked the necessary draft capital to do it after pulling off the Watson trade.

Dealing Mayfield was another matter.

However, to this point, the Browns have not been able to find a team willing to take on his $18.8 million for next season, never mind Mayfield's other baggage and after his injury-slowed 2021 season.

Carolina remains a potential trade partner. The Panthers, who need a long-term answer at quarterback and have told Sam Darnold they intend to bring one in to compete with him to be the starter, chose North Carolina State offensive tackle Ickey Ekwonu instead of a QB with the sixth pick.

Seattle's another possibility for the Browns to do business with after the Seahawks, who traded Russell Wilson to Denver this winter and seem set on going with Drew Lock as their starter, also went with an elite lineman, Mississippi State tackle Charles Cross, at No. 9.

The Panthers and Seahawks may still draft a quarterback in later rounds or they could acquire Mayfield, who is at least a more proven one than any rookie.

He went 29-30 as a starter in Cleveland, led the Browns to the playoffs in 2020 and showed flashes of being a franchise QB. The 27-year-old, though, was plagued by poor decision-making on the field and always seemed to be involved in unnecessary drama.

Still, he might be a better bridge option for Carolina or Seattle, both of whom could be in position to land a top-tier quarterback in next year's draft.

The Browns might have to pay some of Mayfield's contract just to get him off the roster, or perhaps add a late-round draft pick to sweeten the deal and make it more appealing.

If they can't trade Mayfield this weekend, that doesn't mean they won't keep trying. The market could shift in the weeks ahead as the NFL quarterback carousel is rarely not spinning at least a little.

Barring a deal before the draft resumes Friday night, the Browns have seven picks, including No. 44 overall, which they are expected to use to add either a wide receiver or defensive end.

Cleveland traded with Dallas for Amari Cooper during the offseason, bringing in a bona fide No. 1 receiver who will likely be Watson's top target. The Browns lack quality depth at the position, but should be able to add a starter out of the group of receivers still on the board.

There's still a chance the team could re-sign free agent receiver Jarvis Landry after releasing him in March. But Landry, who recently changed agents, may be looking for more money that Cleveland is willing to spend on the 29-year-old.

Edge rusher Jadeveon Clowney remains available as a free agent. The Browns might be able to convince him to come back for a second season after he had solid 2021 while playing on the opposite side from All-Pro Myles Garrett.

If not, look for the Browns to add an end of defensive tackle with one of their next few picks.

NOTES: Commissioner Roger Goodell addressed the situation with Watson, who faces 22 civil lawsuits from massage therapists alleging sexual misconduct. He could also be disciplined by the league for violating the league's personal-conduct policy. “We’re taking it very seriously,” Goodell said of the league's investigation. ”There’s no timetable on it, obviously the investigation’s still ongoing, we’re going to take it seriously.”