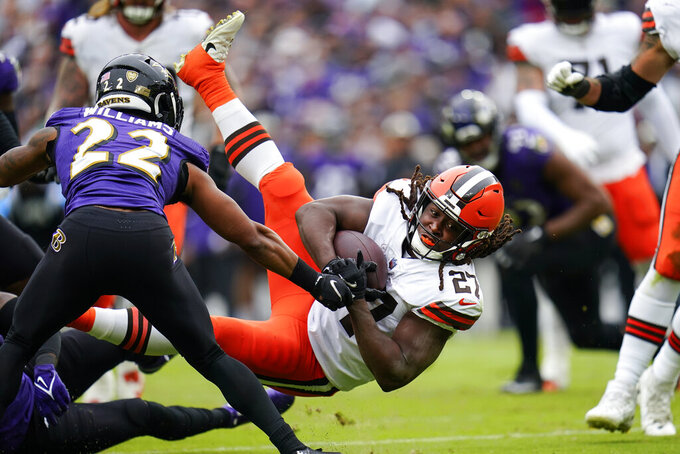 CLEVELAND (AP) — There was plenty of blame to be shared Sunday both outside and inside Cleveland's locker room, which may explain why some of the Browns were yelling and screaming at each other following a fourth straight loss.

Frustration mixed with disappointment and anger.

Following the 23-20 loss at Baltimore, coach Kevin Stefanski's third season is spiraling downward as his talented and probably overrated team continues to find ways to lose. There are problems — some bigger than others — on offense, defense and special teams. Everyone is guilty.

Last week's theme was whether players were fully committed. Now, the overriding sentiment with the Browns is whether their season can be salvaged.

With a chance to beat an AFC North rival on the road and get their season back on track, the Browns (2-5) were doomed by some of the same mistakes that have led to them losing four games by nine combined points.

Throw in a couple disputed calls in the final minutes by officials, and it's understandable why the Browns keep tripping over themselves.

Stefanski said he placed a call to the NFL on Monday for an explanation on a false-start penalty that backed up a potential game-tying field goal by the Browns with just over two minutes left.

“Charley is a veteran long snapper,” Stefanski said. “He did nothing differently than he has done his entire career. We are in no way trying to draw them offside in that situation — the risk-reward is way, way, way too high.

"You may do that if it's a short field goal. There are teams I see do that. But that certainly is not what we were doing there.”

Moments earlier, the Browns had a potential go-ahead touchdown pass erased as receiver Amari Cooper was called for pass interference after delivering a late push on cornerback Marcus Peters.

“You have seen that one go either way,” Stefanski said. “There is hand-fighting in this league. I get it. He created some separation there so you are beholden to whatever the officials saw.”

It's true that good teams get breaks. The bad ones just get broken.

But while things don't look promising, All-Pro guard Joel Bitonio, who has been through a winless season and a playoff run in his eight-plus seasons with Cleveland, doesn't think the Browns are finished.

Cleveland's punt coverage group gave up a 46-yard return that flipped the field, and Stefanski said the ill-fated late field goal was set up a yard closer than normal because York, Hughlett and holder Corey Bojorquez "just didn’t adjust accordingly."

Quarterback Jacoby Brissett rebounded from his worst game to have arguably his best, completing 22 of 27 passes for 258 yards and a 106.5 rating. He lost one fumble, but Brissett, who had three turnovers a week earlier, also managed to wriggle out of some potential sack situations to keep plays alive.

LB Jacob Phillips is almost certainly out for the season with a pectoral injury. Phillips was limited to four games last year after hurting his biceps in training camp. ... TE David Njoku could miss several weeks with a sprained ankle. He had seven catches for 71 yards before getting hurt. ... TE Pharaoh Brown is in concussion protocol. ... CB Denzel Ward remains in concussion protocol. He's missed the past two games.

0.8 — Running back Kareem Hunt's yardage average on five carries. Stefanski noted Hunt's plays “were not blocked correctly” in one of the season's great understatements.

Boo! It's the Cincinnati Bengals (4-3) at home on Halloween in a win-or-else Monday night game for the Browns to keep their skeletal-thin playoff hopes from disappearing.

By Rob Maaddi 18 minutes ago
By Josh Dubow an hour ago
By David Brandt 6 hrs ago
By Teresa M. Walker 6 hrs ago
By Tom Withers 17 hrs ago