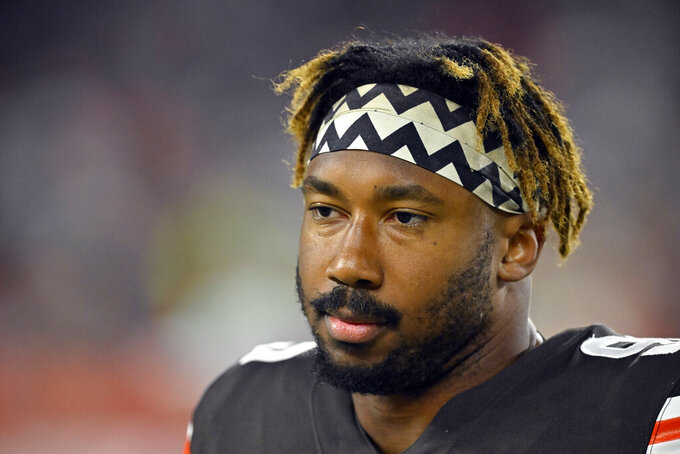 FILE - Cleveland Browns defensive end Myles Garrett (95) stands on the field during an NFL football game against the Pittsburgh Steelers, on Thursday, Sept. 22, 2022, in Cleveland. The Browns defensive star stayed home to rest and recover from multiple injuries suffered in a frightening car crash as his status for Cleveland's game on Sunday in Atlanta remains in doubt. Garrett was not at the team's facility Wednesday, Sept.28, 2022, two days after the All-Pro rolled over his Porsche in a single-car accident on a rural road near home. He suffered a sprained shoulder, strained biceps, cuts and bruises in the wreck. (AP Photo/David Richard, File)

BEREA, Ohio (AP) — For the first time, the Cleveland Browns didn't mind that Myles Garrett wasn't with them on the field.

The All-Pro defensive end stayed home to rest and recover Wednesday from injuries suffered in a single-car crash as his status for the Browns' game on Sunday at Atlanta remains in doubt.

Garrett was not at the team's facility two days after one of the NFL's top players flipped his Porsche when he veered off a rural road near his home following practice. He suffered a sprained shoulder, strained biceps, cuts and bruises in the wreck.

After rolling his car, Garrett was hospitalized for several hours. Bodycam footage from the Medina County Sheriff's Office showed him looking dazed while being treated by medical personnel as he sat on the ground near his badly damaged and overturned vehicle.

Stefanski expects Garrett to return Thursday and didn't rule out the possibility of him practicing. As for Sunday's game, Stefanski said Garrett will be evaluated by team doctors who will consider his physical and emotional states before clearing him.

“You take everything into account,” Stefanski said. “But I think like we do with anything, it’s case-by-case basis and really I’ve spoken to him but get to have him in the building tomorrow and talk more in-depth.”

Several of Garrett's teammates expressed gratitude and relief that he wasn't more seriously hurt in the crash, which also injured an unidentified female passenger.

They saw photos of Garrett's mangled car and were stunned he was able to escape with relative good health.

“In the grand scheme of life the best thing is that’s he’s OK,” said quarterback Jacoby Brissett, who has also been in touch with Garrett. “When I texted him, I was like, ‘Man, I’m just glad you’re all right.’”

Falcons coach Arthur Smith was equally relieved Garrett will be able to come back.

“It just brings you back to what’s important in life,” Smith said. “I don’t know Myles personally. I have a lot of respect for him. But when you see that around the league, obviously it happens every day in every major city, it does hit home when you see it.

“I’m glad he and his passenger were able to just walk away. That’s real life.”

While the crash remains under investigation, the Ohio State Highway Patrol said alcohol and drugs are not suspected.

The Browns detailed some of Garrett's injuries in a statement on Tuesday night, but didn't specify their extent.

The 6-foot-4, 275-pound Garrett has a history of playing through minor injuries and ailments, and safety John Johnson III said he wouldn't be surprised to see him play this week. However, Johnson hopes that's not the case.

“I think he should just take it easy, man.”

It's not known how fast Garrett was driving before the crash. Last year, he was cited in Medina Municipal Court on consecutive days for speeding. He pleaded guilty to going 120 mph in one case and 99 mph in another. He paid $554 in fines for the violations, which both took place in a 70 mph zone.

While certainly a cautionary tale, Johnson said Garrett's crash isn't necessarily a reminder for players to be cautious.

“You should always say that, always be careful,” he said. “You can’t let an accident like this happen and all of a sudden flip a switch.”

Cleveland's defense is dealing with several other injuries beyond Garrett's.

The Browns were missing five defensive starters as they began preparing for the Falcons (1-2), who are coming off a win over Seattle.

Also, the Browns are without starting linebacker and captain Anthony Walker Jr., who suffered a season-ending quadriceps injury in last week's win over Pittsburgh.

"That’s kind of the nature of the NFL,” Stefanski said. “If you look around the league, everybody’s dealing with injuries in some form or fashion. So it’s nothing new.”

NOTES: All-Pro guard Joel Bitonio (biceps) was also held out, but he joined his teammates during the portion of practice open to reporters. ... WR Amari Cooper was given a day off to rest.