Browns' Nick Chubb picking up yards, admirers with every run 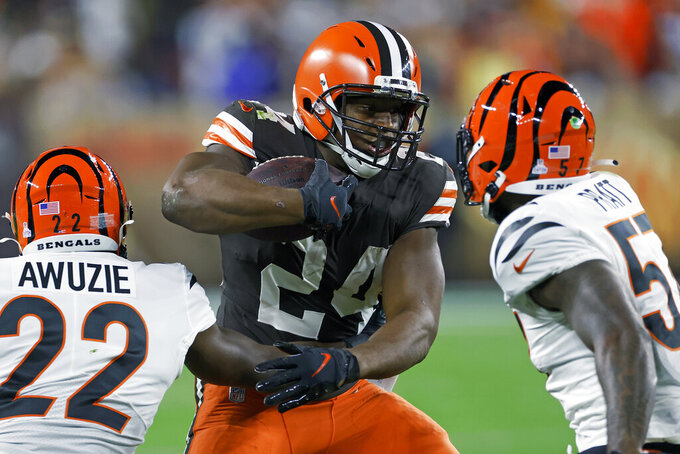 BEREA, Ohio (AP) — Nick Chubb's fan club is expanding beyond the walls of Cleveland's locker room and outside the wider circle of Browns backers.

Asked by NBC's Mike Tirico, "how's best running back on the planet?” in a recent interview, the Titans' powerhouse running back quickly re-directed the query like he was cutting back behind his offensive line.

Coming from Henry, the NFL's two-time rushing champion, the compliment was deeply appreciated by Chubb, who returned the love.

“Yeah I saw it. I feel the same way about him and Saquon (Barkley),” Chubb said Wednesday, bringing the New York Giants' talented back into the conversation. “They’re all great running backs.”

With every busted tackle and 100-yard game, Chubb not only enhances his status among the game's current crop of elite backs but cements his name alongside the greats in Cleveland history, a list that starts with Jim Brown — a Hall of Famer regarded by some as the best in league history.

Churning his legs and leaving bodies in his wake, Chubb makes the Browns (3-5) go on the ground.

The unassuming 26-year-old enters Sunday's game against the Miami Dolphins (6-3) second in the league with 841 yards and first in rushing touchdowns (10). His yardage total through the season's first nine weeks is the most by a Cleveland player since Hall of Famer Leroy Kelly's 890 in 1968.

The Browns haven't had a back win the rushing title since Kelly in '68, a drought Chubb could soon end.

With his typical humility, Chubb downplayed the impact of an individual honor.

“It would be a great team stat if we ever do that,” said Chubb, who finished second and 46 yards behind Henry in 2019. "I don’t think too much about it. I go to work every day and where I end up is where I end up.”

In his short time as Chubb's teammate, Browns quarterback Jacoby Brissett, who signed with Cleveland in March, has grown to appreciate the former Georgia star.

"Obviously you can’t take it for granted because sometimes it’s unhuman-like. But then when you get around him, you’re like: ‘Dang, man, this is what NFL players should be. This is what a professional athlete should be.’

“And he does it day in and day out no matter the circumstances. He's just that guy that you want in your locker room.”

The Dolphins know they'll have their hands full with Chubb and his rare combination of brute force and blazing speed.

"We just gotta attack and make sure that we're gap sound and execute the fundamentals of tackling.”

In Cleveland's 32-13 victory over Cincinnati last week, Chubb took off on a run to the right side and after getting through the initial wave of tacklers, he noticed Bengals defensive back Mike Hilton drop his head and instinctually hurled him for extra yards.

It was vintage Chubb, who beyond delivering consistent on-field performances, is equally steady off it.

He gives Browns coach Kevin Stefanski a model for his players to follow.

“Just a great leader in the building, kind of guy that leads by example, doesn’t have to say too much,” linebacker Sione Takitaki said. "You can rally around guys like that who do it right and, man, he has a lot football left in his career.

“Definitely a guy I look up to and try to be like. Nick Chubb’s awesome.”