Browns out of the cold, set to face Bills indoors in Detroit 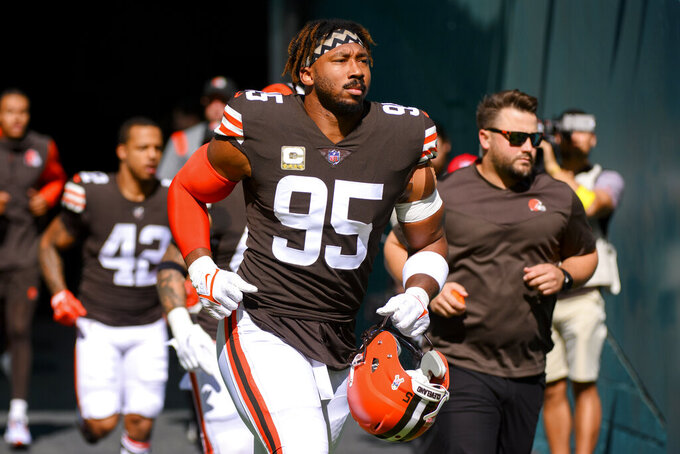 FILE- Cleveland Browns defensive end Myles Garrett (95) runs onto the field for an NFL football game against the Miami Dolphins, Sunday, Nov. 13, 2022, in Miami Gardens, Fla. The NFL’s decision to relocate the Browns’ game on Sunday from Buffalo to Detroit because of a monster winter storm pounding Western New York didn’t bother Cleveland’s All-Pro defensive end one bit. “It benefits everybody that we're not playing in the snow,” Garrett said Friday. (AP Photo/Doug Murray, File)

BEREA, Ohio (AP) — Myles Garrett would much rather make sacks than snow angels.

The NFL’s decision to relocate the Browns’ game on Sunday from Buffalo to Detroit because of a monster winter storm didn’t bother Cleveland’s All-Pro defensive end one bit.

He's happy to leave his shovel at home.

“It benefits everybody that we're not playing in the snow,” Garrett said Friday. “As much fun as it is as a kid, we get paid too much to be slipping and sliding around and trying to make plays and trying to do what we do on a regular basis when we are in 3 feet of snow.”

There’s been a dramatic change over the past 24 hours for the Browns (3-6), who have had a disappointing season to this point and are desperate to keep faint playoff hopes from fading completely.

Instead of taking on the Bills (6-3), their high-octane offense and Buffalo’s fueled-up crowd outdoors in the gusting winds and biting cold, the Browns will be warm and toasty inside Ford Field, the Lions’ home stadium — which could be filled with more Cleveland fans because of the shorter drive.

It may not be the neutral site the league intended.

“I’m as curious as anybody about what that is going to look like, who is going to be in that stadium and how full it’s going to be,” Browns coach Kevin Stefanski said. “We’re ready for the silent count. Obviously, we practiced silent count all week.

“We have to get there on Sunday and see what it looks like. Obviously, I would like as many people in brown and orange as we can get, but I’m as curious as anybody to see exactly how many people are in there.”

Looking to keep their season from going further south, the Browns will travel west by buses and then north into Michigan on Saturday ahead of the game, which was moved for safety concerns on Thursday.

At this point, the Bills' arrival time in Detroit is unclear. They canceled practice Friday and met virtually, but some players were unable to participate after losing power as the snow accumulated.

With snow swirling at their facility, the Browns practiced inside their fieldhouse to better replicate the conditions they’ll deal with in Detroit.

There was one hiccup during the workout as starting cornerback Greg Newsome II sustained a concussion after colliding with an unidentified teammate. The Browns said he has been placed in protocol and will miss Sunday's game.

It's another tough blow for Newsome, who has started all nine games. Last year, he sustained a concussion when he fell and banged his head on the turf on the final play of a Friday practice before the Browns played Baltimore. He missed three games.

Losing Newsome is a major blow to Cleveland's already suspect defense, which will have its hands full with Bills quarterback Josh Allen and his crew of talented wide receivers. Stefanski said a late-week injury is never easy.

It’s been another week of adjustments for the Browns, who are coming off an atrocious performance last Sunday in Miami. The Dolphins rushed for 195 yards as Cleveland's defensive front was pushed all over the field.

The pitiful performance spawned questions about personnel, coaching and effort.

Garrett said it's on all 11 defenders to stop the run.

“It’s always about desire, who wants to step up and really make a play,” he said. “It’s you versus another man usually, sometimes a double team amongst the inside, but once that guy comes off, you have to strain to finish and get in there and make that play no matter what.”

This week, though, the main objective is putting pressure on Allen and containing the dual-threat quarterback capable of making big plays on the ground or through the air. Allen has been turnover prone lately with six interceptions in the past three weeks.

Following last weekend's loss, Garrett was adamant the Browns could salvage their season with wins at Buffalo and home against Tampa Bay.

Although one venue has changed, Garrett said the mission remains the same.

“Still very confident towards going to Detroit and getting that win,” he said.

NOTES: The Browns are getting back two key pieces. TE David Njoku said he'll play after missing the past two games with a sprained ankle, and LB Jeremiah Owusu-Koramoah has been cleared after sitting out two games with a knee injury. ... RT Jack Conklin and his wife welcomed their third child this week. Their son, Crew, was born five weeks early but is doing well. “It’s an exciting week all-around,” he said.