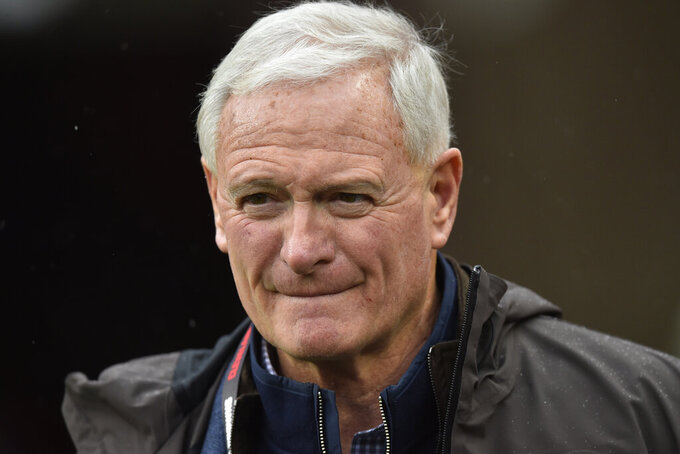 FILE - Cleveland Browns owner Jimmy Haslam watches players warm up for an NFL football game against the Detroit Lions on Nov. 21, 2021, in Cleveland. Haslam denied paying former coach Hue Jackson for losing games and said his one-time employee is only good at “pointing fingers” and needs to accept some blame for his dreadful NFL record. (AP Photo/David Richard, File)

Earlier this week, Jackson intimated in a series of posts on Twitter that Haslam rewarded him for losing during his two-plus seasons with the NFL franchise.

Jackson followed that with an interview on ESPN in which he softened his previous remarks and said he didn't understand what Cleveland was trying to do during his tenure.

In an exclusive interview with Knox News on Thursday, Haslam vehemently dismissed Jackson's claims and said the coach needs to be more accountable for his 3-36-1 record with the Browns.

“In the 15-minute ESPN interview that he did, for approximately 14-and-a-half minutes it was about how he was treated so poorly with the Browns and lots of claims he had.”

Haslam is chairman of the board for Pilot Company, based in Knoxville, Tennessee.

Jackson, who is now at Grambling, was fired by Haslam after starting 2-5-1 in 2018. He went 1-15 and 0-16 in his first two seasons when the Browns' front office seemed to be more focused on acquiring draft picks as assets than winning.

On Wednesday, shortly after former Miami Dolphins coach Brian Flores filed a discrimination lawsuit against the league and three teams on allegations of racial discrimination and unethical practices, Jackson made several posts suggesting he was paid by Haslam to lose.

Flores claims Dolphins owner Stephen Ross offered him $100,000 per loss. Jackson posted that Haslam “was happy” when the Browns lost and inferred he was offered an amount similar to what Flores alleges the Dolphins wanted to pay him.

Haslam, who owns the Browns with his wife, Dee, said Jackson is off base with his claims.

“There are a lot of things I could’ve done better. Hue has never accepted blame for one thing.”

Haslam maintains that not only wasn't Jackson incentivized to lose, he got plenty of support from the franchise.

"I can’t think of any individual that I’ve worked with over the past 45 years that I spent as much time trying to help be successful as I did Hue Jackson,” Haslam said. “His third year, when our roster began to pretty dramatically improve, the eight games he coached we were 2-5-1. After Hue was dismissed, we went 5-3.”

The Browns are coming off a disappointing 2021 season, which began with huge expectations following a playoff appearance and win last season. But Cleveland was marred by injuries, including one to quarterback Baker Mayfield, and finished 8-9.

Jackson went 8-8 in one season coaching the Raiders before joining Cleveland.