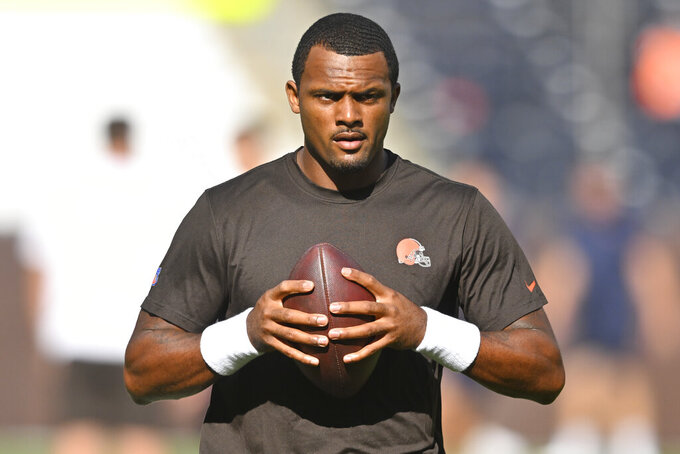 FILE - Cleveland Browns quarterback Deshaun Watson stands on the field before an NFL preseason football game against the Chicago Bears, on Aug. 27, 2022, in Cleveland. Watson can begin practicing on Monday, Nov. 14, 2022, as part of his agreement with the NFL on an 11-game suspension after being accused of sexual misconduct by two dozen women when he played for Houston. (AP Photo/David Richard, File)

Cleveland's No. 1 quarterback was cleared to practice Monday, a significant step for the three-time Pro Bowler accused of sexual misconduct by more than two dozen women while he played for Houston.

Watson reached a settlement with the league in August to sit out 11 games, pay a $5 million fine and undergo counseling and treatment.

To this point, the league said he's fulfilled those obligations.

“Watson has thus far complied with the requirements set out in the August agreement, including evaluation by an NFL-NFLPA jointly appointed clinical professional and participation in a treatment program designed by behavioral experts, and is expected to continue to do so following his return to the football field,” league spokesman Brian McCarthy said in an email.

As long as he continues to meet conditions of the agreement, Watson will make his regular-season debut for the Browns on Dec. 4 against Houston, which drafted him in 2017 and traded him to Cleveland in March for three first-round draft picks.

Before Monday, Watson had been allowed only to attend meetings and work out at the team's facility in Berea. The Browns (3-6), who were blown out 39-17 on Sunday in Miami, don't practice until Wednesday, when Watson will rejoin his teammates on the field for the first time in months.

“It’ll be great,” said wide receiver Donovan Peoples-Jones, adding Watson can provide a moral boost to the Browns even before playing. “He’s a leader. So his voice, what he thinks, can help us.”

Browns general manager Andrew Berry recently said Watson will play against the Texans. The QB will need some time to ramp up to game speed after sitting out the entire 2021 season while demanding a trade.

When he takes the field in Houston, it will be 700 days between regular-season games for Watson, who played briefly in Cleveland's exhibition opener at Jacksonville before his suspension began.

Jacoby Brissett has started the Browns' first nine games and will play in at least two more — at Buffalo on Sunday and home against Tampa Bay on Nov. 26 — before Watson takes over.

Coach Kevin Stefanski said Watson will get some work starting this week in practice, but the focus will remain on Brissett taking the majority of snaps so he's ready to play.

“We'll have a plan for him (Watson) to start getting ready," Stefanski said. "But Jacoby is the No. 1 priority in getting ready to play in this game. Whatever we do for Deshaun won't take away from Jacoby's preparation."

The 27-year-old Watson insists he did not harass any of the women, who accused him of lewd behavior during massage therapy sessions. He settled 23 of 24 civil lawsuits filed against him and was named in another last month.