Browns reeling, at loss to explain terrible trip to Miami 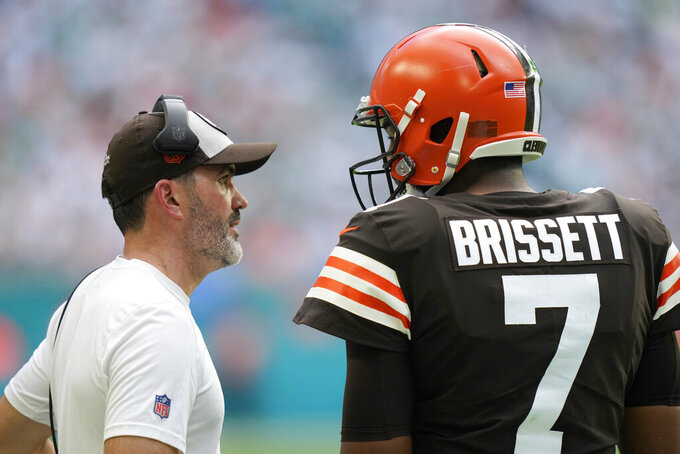 CLEVELAND (AP) — The Cleveland Browns followed their bye by taking a second straight week off.

Unable to build any momentum from their best performance this season, they returned from the break only to get busted up Sunday by the Miami Dolphins, who unleashed a 39-17 thrashing that raised more questions about the Browns' effort, personnel, schemes and future.

There are problems everywhere, but especially for a defense that was supposed to be the team's strength and has turned out to be a glaring weakness.

One of the NFL's top-rated passing teams, the Dolphins came in ranked 28th in rushing and ran it down Cleveland's throat, rolling up 195 yards. The Browns struggled to get off blocks, missed tackles and were thoroughly overmatched from the start.

Myles Garrett, Jadeveon Clowney and the rest of Cleveland's defensive front barely put a hand on Miami quarterback Tua Tagovailoa, who given the luxury of time and space, delivered pin-point strikes to his cadre of fleet-footed receivers.

It was so easy. Too easy.

The Browns were successful in slowing down the Dolphins' dynamic receiving duo of Tyreek Hill and Jaylen Waddle, but Miami's other playmakers stepped up.

It was another case of one step forward, two back for Cleveland's defense, which has only been consistent in being inconsistent. There had been positive signs of progress following a dominant game against Cincinnati on Halloween.

Those are now gone, and already faint playoff hopes are fading fast.

“I didn’t expect that, but it’s the NFL and any given Sunday you can go out there and not execute,” said safety John Johnson III. "They get paid too, so it’s a tough one.”

Coach Kevin Stefanski offered no answers Monday during his Zoom call. He claims to be at a loss to explain why the Browns can't get it together or why his team can't string two solid games in a row.

While outside critics have been calling for defensive coordinator Joe Woods' dismissal for much of the season, Stefanski said blame is widespread.

The Browns were hoping to be in position to make a playoff push when quarterback Deshaun Watson returns from his 11-game suspension (he was cleared Monday to practice) and plays next month.

That seems unlikely now, and unless the Browns get things fixed soon, Watson's six-game stint to end the season will be nothing more than a chance for him to knock off some rust to get ready for next year.

“We have to look ourselves in the mirror as a group and right the ship and get this thing going,” Johnson said. "We're running out of time. We're past the midway point now, so it is time to step it up.”

Not nearly enough. Even Cleveland's dependable running game spent most of Sunday grinding its gears. Other than a solid opening drive, the offense sputtered and a costly fumble by the dependable Nick Chubb sabotaged a potential scoring chance when the Browns were only down three.

The defensive interior looks inferior. Miami's offensive line opened huge running lanes. In fairness, the Browns are down three linebackers due to injuries, but there's an alarming lack of depth and experience in the front seven that was further tested on a warm day in South Florida.

Wide receiver Donovan Peoples-Jones had a season-high 99 yards on five catches. It was his fourth straight game with at least 70 yards, and sixth straight with 50 or more.

The third-year wideout's growth as a playmaker is an encouraging sign with Watson's return on the horizon.

Cleveland's offensive line rarely looks ordinary. The Dolphins made it appear less than that.

Along with the running game issues, the Browns struggled to protect Jacoby Brissett, who was sacked three times and under pressure from Bradley Chubb and Co. almost every time he dropped back.

Pro Bowl right guard Wyatt Teller had to be pulled in the first half with a calf injury that kept him out of the previous two games. ... Stefanski offered no updates on tackles Jack Conklin (foot) or Jedrick Wills Jr. (ankle). ... Linebacker Jeremiah Owusu-Koramoah (knee) and tight end David Njoku (ankle) both missed their second straight games.

Zero — The Browns didn't force the Dolphins to punt. Miami hadn't had that happen since 2003.

A trip to Buffalo to face a Bills team stinging from an overtime loss Sunday at home. If the Browns are going to salvage their season, they'll have to do it on the road with five of their last eight games outside Cleveland.