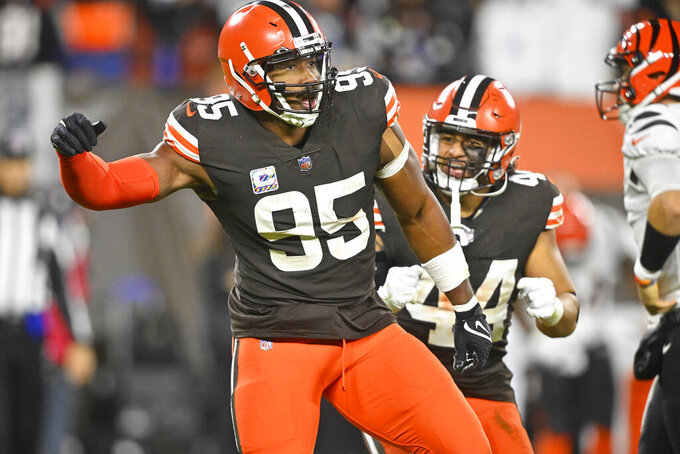 CLEVELAND (AP) — In the waning minutes of October, the Cleveland Browns cut loose in their locker room, releasing the pent-up frustrations caused by weeks filled with mistakes and injuries that put their season in peril.

There were smiles everywhere late Monday night, some yelling, a few sighs of relief.

Crisp tackling, smart play-calling and sublime execution — except for a botched trick play — resulted in their best all-around game this season as the Browns extinguished a four-game losing streak with a 32-13 win over the Cincinnati Bengals, embarrassing the defending AFC champions in prime time.

Written off. Knocked down. The Browns got back on their feet.

“We have a saying, ‘Everything we want is on the other side of hard,'” quarterback Jacoby Brissett said. “You have to go through things for you to cherish things like this and a day like tonight.”

There's still plenty of room for improvement, but there are also encouraging signs for the Browns (3-5), who head into a bye week that will provide injured starters time to heal and the team to recharge for its next nine games.

Brissett, who is down to a handful of starts with Deshaun Watson's expected return from an 11-game suspension later this month, savored a victory in which he outplayed Joe Burrow and posted the highest quarterback rating (133.7) of his career.

Other than a fumble when he tried to throw as the pocket collapsed, Brissett had another strong performance as the Browns beat one of their AFC North rivals for the fifth straight time. He completed 17 of 22 passes (77%) for 278 yards.

Brissett, hardly known for his speed, also added a 3-yard touchdown run on a play that perhaps best exemplifies his season and the one the Browns are having.

Flushed from the pocket, Brissett sprinted left and as he neared the goal line his mind flashed back to an eerily similar situation three weeks ago. On Oct. 9, Brissett forced a throw into the same end zone and was intercepted, a turnover that sealed Cleveland's fate in a 30-28 loss to the Los Angeles Chargers.

He wasn't making the same mistake.

“I have been beating myself up about that a lot just because that has been like sitting on my heart,” said Brissett, who shook off several hard hits, including a blow to the throat. “I always told myself if I ever get that opportunity again, I am going to make the right decision.”

This time, he dived and hit the pylon — Browns 18, Bengals O.

Brissett learned. So have coach Kevin Stefanski and the Browns, who after enduring some turbulent days early in the season's first two months believe better ones are ahead in November and December.

“The light was never gone," star end Myles Garrett said, disputing the idea the Browns flipped a switch. "That's all we talked about: Empty the tank, 100 percent commitment to your craft and your brother.

"See what we can get out of it, especially going into the bye week. We had a lot of guys buy completely into that message, and it really showed.”

For the second straight week, Cleveland's much-maligned defense stepped up.

With Garrett and Jadeveon Clowney pinching from the edges, the Browns were able to put constant pressure on Burrow, sacking him five times and rarely allowing Cincinnati's QB time to set his feet.

Coordinator Joe Woods' seat has cooled considerably. Despite some key injuries, he's got his group playing at a high level, and the Browns will need to stay there in order to make any playoff push.

Rookie Cade York had another long field-goal attempt blocked, this one from 53 yards.

Either Cleveland needs to shore up its protection unit or York has to find a different trajectory on deep kicks. After all, his range is what prompted the Browns to draft him in the fourth round.

The four-year veteran recorded a team-high 13 tackles — including a couple in space to bring down running back Joe Mixon — and added a strip-sack. Takitaki's performance also helped offset the absence of fellow linebacker Jeremiah Owusu-Koramoah, who was out with a knee injury.

Hard to be too critical after a blowout win.

The lone kickoff return against Cincinnati went for 11 yards.

Stefanski said top cornerback Denzel Ward remains in concussion protocol after missing his third straight game. ... Tight end David Njoku (ankle), right guard Wyatt Teller (calf) and Owusu-Koramoah are all progressing and could be back after the bye.

Zero — The number of passes targeted to Cleveland's tight ends, a statistical anomaly and incredibly unusual for Stefanski, who uses more tight-end formations that any coach.

A week to recover before a Nov. 13 visit to Miami, the first of four road games in five weeks for the Browns.