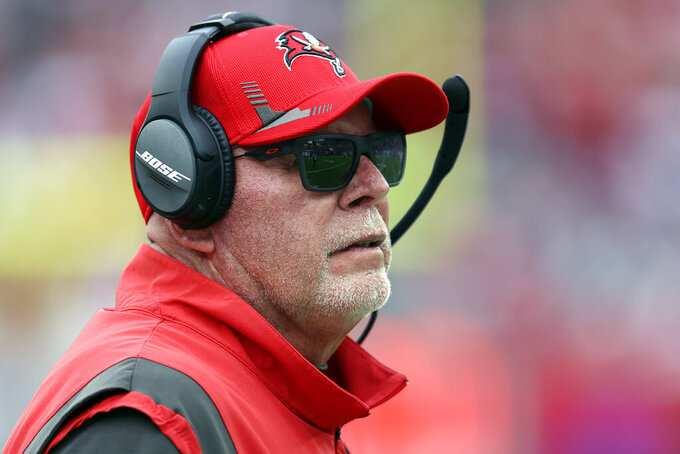 Brady announced his retirement Tuesday, ending an unparalleled career that began with a two-decade stint with the New England Patriots followed by two seasons with the Bucs, who went from missing the playoffs 12 consecutive years before his arrival to winning the NFL title in his first season in a new uniform.

The decision was not a surprise to general manager Jason Licht and coach Bruce Arians, who assembled an all-star roster around Brady with an understanding that it would be difficult to keep an ultra-talented lineup together for 2022 — with or without the 44-year-old quarterback.

“We’ve been preparing,” Licht said, adding that the Bucs will “explore all avenues to try to make the best decision that we can for the organization'' regarding a successor.

"We feel like we have a really good foundation. I think B.A. has already said that this isn’t a rebuild, it’s a reload. I look at it as a little bit of a remodel, Licht said from Mobile, Alabama, where he's attending the Senior Bowl and evaluating draft prospects.

“We’ve got seven of our nine Pro Bowlers under contract for next year. We’ve got a lot of really good young players on this team,” Licht added. “We’re going to try to re-sign some of our players back, and we’ll continue to explore players in free agency as well.”

The day after the Bucs lost to the Los Angeles Rams in the divisional round of the playoffs, Arians conceded the team was already pondering potential options if Brady decided he had played his last game.

“We do that with every position. The quarterback, obviously, you start there,” Arians said. “Again, see where we’re heading and see what Tom does. But we’ll be doing our homework, that’s for sure.”

Arians was asked if there was a chance a potential successor to Brady, who threw for a league-leading 5,316 yards and 43 touchdowns in his final season, was already on the roster.

“I’d be comfortable if it is. I like what we have,” Arians said. “But again, you never know what’s behind Door No. 2. We went down that road two years ago, and there’s Tom Brady.”

Licht and Arians prepared for free agency in 2020 not knowing whether Brady would actually wind up leaving the Patriots after 20 seasons.

It was also unclear at the time if the NFL's career passing leader would seriously consider joining the Bucs, who had a talented nucleus of young players but also a long history of losing.

A more pressing decision in the weeks ahead of landing Brady was whether to retain 2015 No. 1 overall draft pick Jameis Winston, who threw for more than 5,000 yards, but also undermined the team’s chances for success the previous season by leading the league in interceptions.

Brady not only changed the culture of the franchise but instilled confidence among teammates while leading the Bucs to a 29-10 record, including a 5-1 mark in the playoffs and the second Super Bowl title in club history.

Expectations remain high, which is one of the reasons it’s difficult to imagine the next starting quarterback is already on the roster.

With Brady retiring, rookie Kyle Trask is the only remaining quarterback under contract for next season. The 2020 second-round draft pick out of Florida was inactive for every game this season.

Veterans Blaine Gabbert and Ryan Griffin, meanwhile, will be free agents next month. Neither has a dazzling pro resume, with Gabbert going 13-35 as a starter over portions of 10 seasons with five different teams and the 32-year-old Griffin having four career passing attempts.

“We’re very excited about the development of Kyle, where he’s come from the last year and what he’s done just being able to sit behind Tom and Blaine, and Ryan as well,” the GM said.

Arians said last week a major priority this winter will be re-signing as many of Tampa Bay’s own free agents as possible.

Pro Bowl guard Ali Marpet is confident the team will do whatever necessary to remain a championship contender.

“Every year you’re going to lose guys in free agency. Last year, we thought we were going to lose a lot of guys and we were able to retain (all 22 starters),” Marpet said. “So who knows what sort of magic we can work moving forward.”

Arians expects the disappointment of falling short of a goal to get back to the Super Bowl to motivate players in the months ahead.

“I think once you start rebuilding the team, and the core guys that are still here, they’re not going to forget that, that’s for sure,” Arians said. “There will be a different sense of urgency, I think, coming into OTAs and minicamp as we put the team together.”