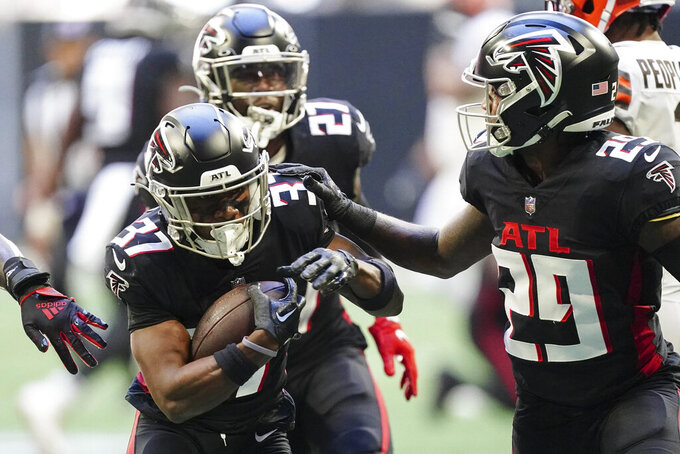 Atlanta Falcons cornerback Dee Alford, (37) runs his intercepted ball with teammates during the second half of an NFL football game against the Cleveland Browns, Sunday, Oct. 2, 2022, in Atlanta. The Atlanta Falcons won 23-20. (AP Photo/John Bazemore)

BETTING LINE: Buccaneers by 9½, according to FanDuel SportsBook.

TURNOVER DIFFERENTIAL: Falcons minus-1; Buccaneers plus-3

FALCONS PLAYER TO WATCH: QB Marcus Mariota returns to the stadium where he made his NFL debut as the No. 2 overall pick in the 2015 draft, throwing for four touchdowns without an interception for the Tennessee Titans. The eighth-year pro has thrown for 779 yards, three TDs and four interceptions through four games in his first season with the Falcons.

BUCCANEERS PLAYER TO WATCH: QB Tom Brady is 10-0 lifetime against the Falcons, including a come-from-behind Super Bowl win while he was with the New England Patriots. He’s 4-0 vs. Atlanta since joining the Buccaneers in 2020, and the Bucs have scored at 30 points in all four victories.

KEY MATCHUP: Falcons run game vs. Bucs defense looking to rebound after allowing 189 yards rushing during last week’s 10-point loss to the Kansas City Chiefs. No team has been better at stopping the run over the past three-plus seasons.

KEY INJURIES: The Falcons will be without RB Cordarrelle Patterson (knee), who was placed on injured reserve this week. ... TE Kyle Pitts (hamstring) was ruled out for the game Friday. ... CB Isaiah Oliver (knee) has been designated for return from IR and the Falcons have a 21-day window to determine if he’ll be activated. ... QB Tom Brady began the week of Tampa Bay’s injury report with a sore throwing shoulder, but fully practiced Thursday and Friday. ... TE Cameron Brate (concussion), S Logan Ryan (foot) and DT Akiem Hicks (foot) were ruled out. ... WR Julio Jones (knee) was questionable. ... LT Donovan Smith (elbow) and WRs Chris Godwin (knee), Russell Gage (hamstring) and Breshad Perriman (knee, hamstring) were all limited in practice all week. The Bucs may wait until game day to determine their status.

SERIES NOTES: The Bucs have won the past four meetings between the NFC South rivals, They have scored more than 40 points in the past two in Tampa.

STATS AND STUFF: The Falcons are fourth in the NFL in rushing, averaging 168 yards per game. Losing Patterson, who had his third rushing TD of the season during last week’s win over Cleveland, will hurt but rookie Tyler Allgeier and practice squad activation Caleb Huntley are coming off strong performances against the Browns. Allgeier, a fifth-round draft pick, rushed for 84 yards on 10 carries last week. Huntley averaged 5.6 yards per carry on 10 attempts and scored his first career touchdown. ... Falcons WR Drake London ranks third among NFL rookies with 231 receiving yards. The first-round draft pick is fourth in catches with 18. ... Brady has thrown for 3,341 yards and 28 TDs vs. four interceptions in 10 games against the Falcons, including postseason. He had 644 yards passing with nine TDs vs. one interception in two games last year. ... Former Falcons WR Julio Jones returned to Tampa Bay’s lineup after missing two game because of an injury. He spent 10 seasons with Atlanta, departing in 2021 as the franchise’s career leader in receptions (848) and receiving yards (12,896). He’s second on the club’s career TD receptions list with 60. ... Bucs WR Mike Evans returned from a one-game suspension last week and had eight catches for 103 yards and two TDs.

FANTASY TIP: Bucs WR Chris Godwin had 15 receptions for 143 yards the previous time he faced Atlanta. In his past seven games against the Falcons, he’s averaged 104 yards per game with nine TDs.