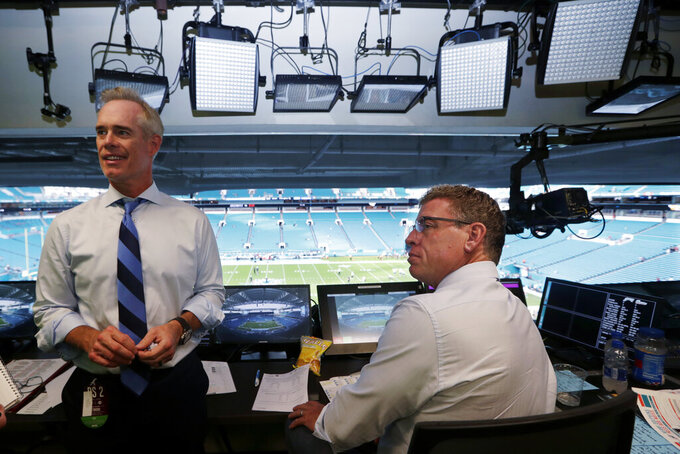 FILE - Fox Sports play-by-play announcer Joe Buck, left, and analyst Troy Aikman work in the broadcast booth before a preseason NFL football game between the Miami Dolphins and Jacksonville Jaguars in Miami Gardens, Fla., Aug. 22, 2019. Aikman is on the verge of leaving Fox after 22 years to become the lead analyst on ESPN's Monday Night Football. The New York Post reported that Aikman will sign a five-year deal that would rival the $17.5 million per year Tony Romo is making at CBS. (AP Photo/Lynne Sladky, File)

On the first day of the new league year, one of the NFL's top broadcasting teams is moving from Fox to ESPN.

ESPN announced on Wednesday a move that has been in the works for nearly a month — Joe Buck and Troy Aikman will be broadcasting “Monday Night Football.”

Buck and Aikman have been doing games together since 2002, when they became Fox's top crew. They will tie Pat Summerall and John Madden's record for the longest NFL booth pairing this year at 21 seasons.

“When you have the opportunity to bring in the iconic, longest-running NFL broadcasting duo, you take it, especially at a time when we are on the cusp of a new era in our expanding relationship with the NFL,” said ESPN chairman Jimmy Pitaro in a statement.

“The NFL continues to ascend, and we now have more games than ever before, providing additional opportunities for Joe, Troy and our deep roster of commentators.”

Pitaro finally has an all-star booth for the longtime primetime franchise. He tried to get Peyton Manning for years to join the “Monday Night Football” booth since he retired after the 2015 season.

The MNF booth has had frequent changes since Mike Tirico left for NBC in 2016. Tirico was the play-by-play voice for 10 seasons (2006-15) and teamed with Jon Gruden for the last seven. Sean McDonough took over for Tirico for 2016 and ’17 and worked with Gruden.

After Gruden left to take over as Raiders coach and McDonough sought to move back to college football, ESPN went with the three-man booth of Joe Tessitore, Jason Witten and Booger McFarland in 2018. Witten struggled as an analyst and decided to return to the playing field in 2019.

The only stable part of ESPN's booth has been Lisa Salters, who will return for her 11th season reporting from the sidelines.

Aikman had been with Fox since 2001, but there had been rumblings the past couple of months that the Hall of Fame quarterback had been looking to move on.

Many thought that Aikman would join Al Michaels at Amazon, which takes over “Thursday Night Football” next season. Instead, it is ESPN.

“The opportunity to be a voice on ‘Monday Night Football’, adding to its legacy and being a part of the future of the NFL on ESPN, has me motivated and reflective. As a kid in California, the voices of Frank Gifford, Howard Cosell, and my mom’s personal favorite, Don Meredith, echoed throughout our living room each week," Aikman said in a statement. "I am looking forward to the next several years with ESPN and all our new teammates.”

Buck’s Fox contract had a year remaining, but the network allowed him to pursue the opportunity to remain with Aikman. Buck has a long history with “Monday Night Football," often going on trips with his father — Hall of Fame broadcaster Jack Buck — to watch him call Monday night games on radio with Hank Stram.

“I never thought that I could end up there and well, here he we are. I didn't see it coming and gosh, I'm glad it did,” Buck said in a video on Twitter after ESPN made the announcement.

Buck had been with Fox Sports since it began in 1994. He had also been the network's top baseball voice and called 24 World Series.

“Troy Aikman and Joe Buck have been a part of some of the greatest football moments in FOX Sports history," Fox Sports CEO and executive producer Eric Shanks said. "Buck’s voice, as an original member of the network, has also been the soundtrack for a generation of baseball fans. The pair will forever be a part of the network’s DNA and as they embark on their next chapter, we wish them and our friends at ESPN all the best.”

Besides “Monday Night Football”, Buck and Aikman will both contribute content to the ESPN+ streaming service.

ABC will also have the 2027 Super Bowl, marking its return to televising the NFL’s championship game for the first time since 2006.

Fox could bump Kevin Burkhardt and Greg Olsen up to the top team or it could make a run at former New Orleans Saints coach Sean Payton. Burkhardt would also be one of the top contenders to replace Buck on baseball along with Joe Davis.

If Olsen was promoted, he would follow the same path as Aikman — one year on the No. 2 team before moving up. Whoever succeeds Aikman, it will be an important choice for Fox since it has the 2023 and 2025 Super Bowls.

Amazon also hasn't announced its booth for “Thursday Night Football”, even though there are indications it is trending toward Michaels and Kirk Herbstreit. Mike Tirico is expected to move into the play-by-play role for NBC's “Sunday Night Football” when Michaels' contract expired after last month's Super Bowl.