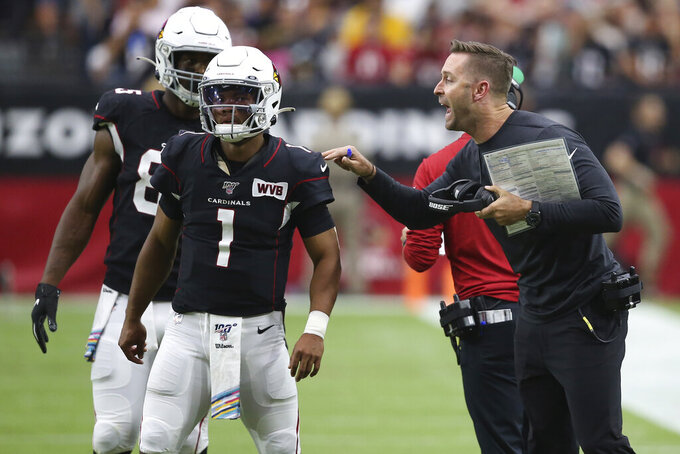 FILE - In this Sunday, Oct. 13, 2019, file photo, Arizona Cardinals head coach Kliff Kingsbury talks with quarterback Kyler Murray (1) during the first half of an NFL football game against the Atlanta Falcons, in Glendale, Ariz. Being a rookie head coach in the NFL is challenging enough, and also calling plays for the offense only increases the difficulty. Murray has helped ease the growing pains for Kingsbury. (AP Photo/Ross D. Franklin, File)

TAMPA, Fla. (AP) — With the Tampa Bay Buccaneers off to a slow start midway through their first season under Bruce Arians, the former Arizona Cardinals coach is not eager to reminisce about the time he spent leading his old team.

Stopping a four-game losing streak will be Arians' top priority when the Bucs (2-6) and Cardinals (3-5-1) play Sunday — not saying hello and exchanging pleasantries with familiar faces on the opposing sideline.

"There's only about eight or nine guys left on that team from when I had them two years ago — pretty good overhaul," Arians said. "Those guys — it's always different (and) difficult. I don't like going against friends, but we're not friends when it's kicked off."

Including a playoff victory that landed Arizona in the 2015 NFC championship game, Arians won 50 games over five seasons with the Cardinals. He retired and took a job in television after going 8-8 in 2017, only to be lured back into coaching when Tampa Bay called last winter seeking a quick fix for quarterback Jameis Winston and an end to the NFL's second-longest postseason drought.

The Bucs haven't made the playoffs since 2007 and are in danger of extending their stretch of futility to 12 consecutive seasons.

Turnovers have been a problem, but so has a defense that's failed to protect fourth-quarter leads in three of the team's six losses.

"You are what you are," Arians said of his team's record. "It's disappointing to be where we're at because we've had leads, we've come from behind, we've missed a kick, we don't get a call — that's all very disappointing because we should be in the hunt. There's a lot of football left to get into the hunt. You've got to win one to get a string of them going, and we need to win one."

The Cardinals, led by first-year coach Kliff Kingsbury and rebuilding around No. 1 overall draft pick Kyler Murray, barely resemble the team Arians left behind in Arizona.

The Bucs coach is impressed by Murray's performance over the first nine games. The rookie has thrown 172 consecutive passes without an interception, the longest current streak in the NFL, and the Cardinals have turned the ball over just four times all season.

"He's a real fast Russell Wilson, extremely dangerous when he breaks out of there and gets the ball out of his hand real quick — very accurate and they're doing some really good things with him," said Arians, whose team was torched by the Seahawks quarterback for 378 yards passing and five touchdowns during a 40-34 overtime loss at Seattle last week.

"Obviously, there's a lot of luck involved in this game, but he's doing a nice job of not putting the ball in harm's way," Kingsbury said of Murray. "We're not a team that's going to be able to come out and make a lot of mistakes."

In addition to Arians, Tampa Bay's coaching staff is loaded with assistants who worked for the Cardinals for portions or all of his five-season stint (2013-17), including offensive coordinator Byron Leftwich and defensive coordinator Todd Bowles. Assistant head coach/run game coordinator Harold Goodwin has reunited with Arians, too, as have 10 others in various roles for the Bucs. The roster, meanwhile, includes three former Cardinals — OL Earl Watford, ILB Kevin Minter and RB T.J. Logan.

The Cardinals hope to have running back David Johnson back for Sunday's game after he missed the past two games because of an ankle injury. Johnson has 300 yards rushing and 315 yards receiving this season. He'll likely split time with Kenyan Drake, who ran for 110 yards and a touchdown and caught four passes for 52 yards on Oct. 31 in a 28-25 loss to the San Francisco 49ers. It was Drake's first game after being acquired in a trade from the Miami Dolphins three days earlier. The team's other main RB, Chase Edmonds (hamstring), is expected to miss his second straight game.

PROBLEMS WITH THE PASS

Arizona's defense is giving up more than 407 yards per game, which ranks 30th. The Cardinals have had a particularly tough time defending the pass, giving up nearly 281 yards per game.

In last Thursday's loss to San Francisco, 49ers quarterback Jimmy Garoppolo threw for 317 yards and four touchdowns. Arizona's defense hoped to get a boost when star cornerback Patrick Peterson returned from a six-game suspension a few weeks ago, but the ninth-year veteran's performance has been up and down, and he'll have a tough task against the Bucs' receiver duo of Chris Godwin and Mike Evans. "I expect him to have a great game this week," Kingsbury said. "He's one of the best to ever play that position, and he's not short on confidence. He'll be ready to rock this week."

The Bucs, who lead the NFL in run defense, are one of the three teams yielding more yards per game (293.5) passing than Arizona. Injuries forced Bowles to use five rookies on defense last week at Seattle, including S Mike Edwards and CBs Sean Murphy-Bunting and Jamel Dean. Two starters — CB Carlton Davis III and S Jordan Whitehead — are second-year pros, while the most experienced player in the secondary is fourth-year cornerback Vernon Hargreaves III, who missed the final 15 games of last season with an injury. The Bucs are fourth in the league in scoring at just under 29 per game. Conversely, the defense is yielding 31.5 a game, which ranks 31st.

"It's basically on the back end, where we thought we'd be very strong," Arians said. "We've made errors mentally in technique and judgment and everything else, so (we've been) very disappointing in that way. I'm not used to giving up leads in the fourth quarter, and we've done it a few times now."