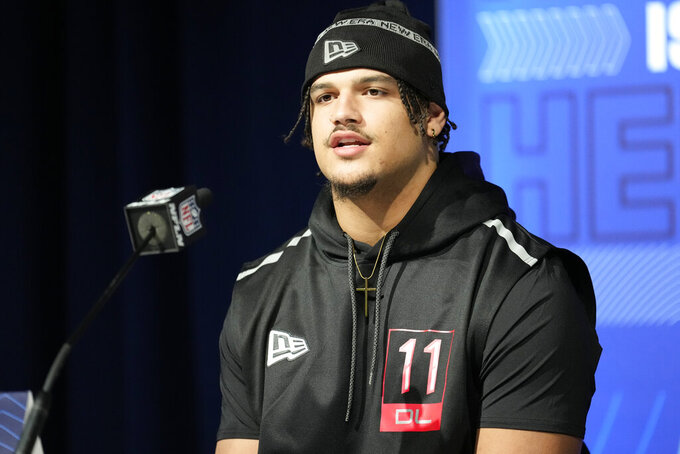 TAMPA, Fla. (AP) — The Tampa Bay Buccaneers are determined to give Tom Brady everything he needs to pursue an eighth Super Bowl title.

That includes versatility and depth on the defensive and offensive lines, which the defending NFC South champions addressed by taking Houston's Logan Hall and Central Michigan's Luke Goedeke with their first two picks in the NFL draft on Friday night.

Hall, a defensive lineman who was a first-team All-American Athletic Conference selection last season, was the first player taken in the second round — No. 33 overall. The Bucs traded up three spots from No. 60 to land Goedeke, a Mid-American Conference standout expected to make the transition from offensive tackle to guard in the pros.

They wrapped up the night by taking running back Rachaad White in the third round, No. 91 overall. He was a 1,000-yard rusher and also excelled at catching the football out of the backfield at Arizona State.

“That was a big reason we like him,” general manager Jason Licht said of White's pass-catching ability and how his skill-set could be an asset as a backup to veterans Leonard Fournette and Giovani Bernard.

Coach Todd Bowles said the 6-foot-6, 285-pound Hall was one of several players the Bucs were considering taking at No. 27 before deciding to trade out of the first round on Thursday night.

In return for allowing Jacksonville to trade up to take linebacker Devin Lloyd, Tampa Bay moved down six spots to No. 33 and also picked up the first pick of the fourth (No. 106) and sixth (180) rounds.

Bowles said the team received offers from teams seeking to kick off the second day of the draft but that the Bucs never seriously considered moving down again before selecting Hall.

“We had a few players at 27 we targeted. Moving back to 33 ... we had one guy left there," the coach said. "The other ones went off the board, so it wouldn't have been smart for us to trade back down and leave the guy we wanted.”

Hall could wind up being a replacement for Ndamukong Suh, who is a free agent and remains unsigned after spending the past three seasons with the Bucs.

“He's a very athletic guy with a big upside. ... He has a really high ceiling,” Licht said.

Bowles said one decision doesn't impact the other and that drafting Hall won't necessarily affect Tampa Bay's effort to re-sign Suh as he and Licht continue to try to give Brady all the help he needs to win another championship.

“We need d-linemen,” said Bowles, promoted from defensive coordinator to coach when Bruce Arians stepped down. “We like depth. We play a lot of people down there and platoon a lot of people, so it has no bearing on the other guys.”

For the second straight year, the Bucs entered the draft without any pressing needs on offense or defense, primarily aiming to bolster their depth for 2022 while selecting players who ideally will develop into potential starters in the second or third seasons of their careers.

Brady's decision to end his brief retirement resolved questions about the club’s quarterback plans for next season, as well as set the stage for Licht to re-sign Fournette, Pro Bowl center Ryan Jensen, cornerback Carlton Davis and several other key players the Bucs could have been lost in free agency.

A year ago, the Bucs defied the odds by returning all 22 starters from the roster that won the previous season’s Super Bowl, a move that helped them set a franchise record for regular season wins (13) and the team's first NFC South title in more than a decade in 2021.

Over the past two months, Licht wasn't able to keep the starting lineup intact. He was able, however, to retain most of the team's own free agents. Licht also made a traded to acquire a replacement for retired Pro Bowl guard Ali Marpet and landing receiver Russell Gage, offensive lineman Fred Johnson and defensive backs Logan Ryan and Keanu Neal in free agency.

With Suh and tight end Rob Gronkowski still unsigned after helping the Bucs win 29 games over the past two seasons, it was no surprise Bowles and Licht targeted one of those positions with the team's first pick.

To move up three spots to land Goedeke later in the second round, the Bucs yielded the 60th pick, as well as No. 180 — the sixth-rounder obtained from Jacksonville on Thursday night — to the Buffalo Bills.

Hall is a versatile lineman who has the potential to be effective as both an inside and edge passer.

“”Playing the three technique is kind of the home position for me," Hall said.

“Tampa Bay is kind of multiple on their fronts, and that really excites me because I don't have a cookie cutter fit,” he added. “I can play a lot of fronts. I can be used in a lot of different ways.”