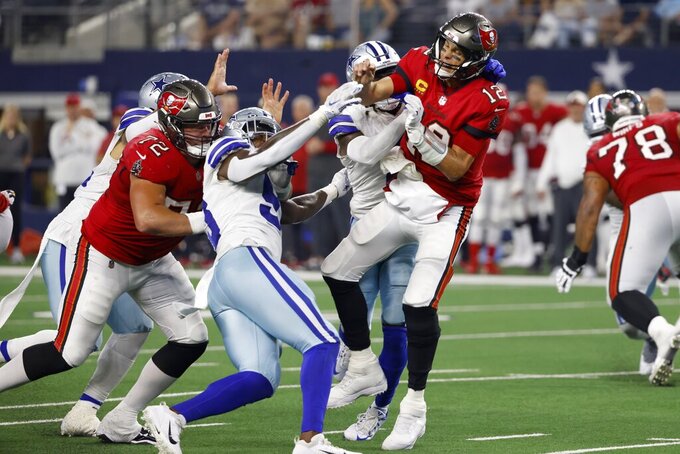 TAMPA, Fla. (AP) — Tom Brady likes the way the Tampa Bay Buccaneers opened the season, showcasing a greater commitment to running the ball as well as a strong, confident defense capable of making the 45-year-old quarterback’s job a little easier.

“The run game, defense, that’ll win you a lot of games in the NFL,” the seven-time Super Bowl champion said after a 19-3 victory over Dallas improved his record to 7-0 all-time against the Cowboys.

They can also help the Bucs (1-0) protect Brady while a revamped offensive line, featuring two new young starters, melds in the wake of losing two veterans in training camp and playing a portion of Sunday night’s opener without injured left tackle Donovan Smith.

“We love to throw the ball less and control the game ... play great defense and get turnovers,” said Brady, who was 21 of 27 for 212 yards, one touchdown and an interception after leading the league in completions, attempts, passing yards and touchdowns last year.

“I think we did a decent job moving the ball, we just couldn’t quite get it in the end zone,” Brady said. “There’s a lot of stuff to clean up.”

While a more balanced approach on offense was influenced by several factors, including a desire to slow the Micah Parsons-led Dallas pass rush and the hyperextended elbow that sidelined Smith during the second half, coach Todd Bowles stressed it made sense to stick to the running game against the Cowboys.

“We were having success, we were eating the clock, so we stayed with it,” Bowles said.

Fournette carried 21 times for 127 of Tampa Bay’s 152 yards rushing. He also had two receptions for 10 yards.

The defense, bolstered by the offseason addition of tackle Akiem Hicks and a healthy secondary, did its part by shutting down the Cowboys after yielding a field goal on the opening drive of the game.

Dallas, which led the league in offense and scoring last season, was limited to 12 first downs and 244 yards total offense.

It’s as dominant a defensive performance Tampa Bay has had since the Bucs stymied Patrick Mahomes and the Kansas City Chiefs in the Super Bowl season two years ago.

Linebacker Devin White set the tone for the defense with eight tackles and two of Tampa Bay’s four sacks. The fourth-year pro also received a rave review from Bowles, who was promoted from defensive coordinator to coach when Bruce Arians retired in March.

“It wasn’t just the pass rush. It was the way he executed and ran the defense," Bowles said. "He was kind of the quarterback out there. Understanding the formations and (making) the right calls and checks. ...I thought he did a great job.”

The Bucs settled for four field goals in the first half. They finished with 347 yards total offense, but only got into the end zone once — on Brady’s 5-yard touchdown pass to Mike Evans in the third quarter.

“I think the defense played awesome," Brady said. "Offensively, I think we can do a lot better than that. ... We’re going to have to.”

WR Julio Jones. Slowed by injuries that limited his production with Atlanta and Tennessee the past two seasons, he looked good in his Bucs debut with three receptions for 69 yards, including a 48-yard catch that was the biggest pass play of the game.

If there was a downside to the opener, it was WR Chris Godwin leaving with a hamstring injury after being cleared to play Sunday night barely eight months after undergoing surgery to repair the anterior cruciate ligament, as well as the medial collateral ligament, in his right knee.

Bowles said Godwin’s hamstring injury doesn’t appear to be as bad as the team initially feared. “It all depends on how his treatment goes and how he heals. Hopefully, we’ll have him back sooner than later,” the coach said. ... Smith, meanwhile, has a hyperextended elbow and will be monitored during the week. “It’s a pain tolerance thing, so he’s pretty sore right now,” Bowles said.

5 — After being penalized 11 times during a two-point, season-opening victory over the Cowboys in Tampa last September, the Bucs were only flagged five times Sunday night, which Bowles said is “still a little bit too many.”

The Bucs travel to New Orleans next Sunday to face the NFC South rival Saints, who’ve won all four regular-season meetings between the teams since Brady signed with Tampa Bay in 2020. Of course, the Brady-led Bucs did win a playoff matchup at New Orleans during Tampa Bay’s Super Bowl run.