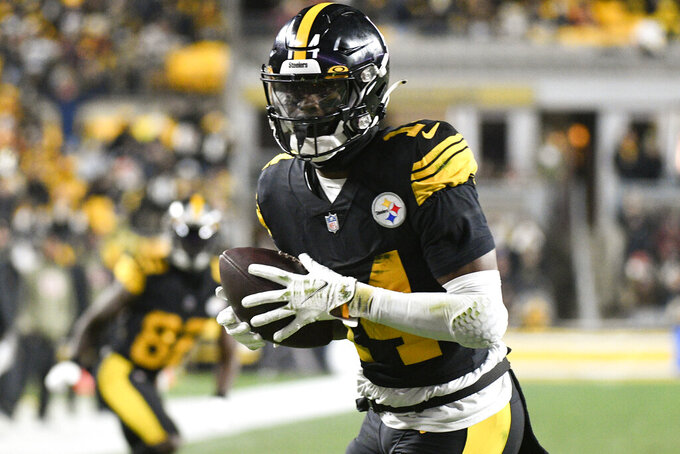 Pittsburgh Steelers wide receiver George Pickens (14) makes a catch and takes it in for a touchdown against the Cincinnati Bengals during the first half of an NFL football game, Sunday, Nov. 20, 2022, in Pittsburgh. (AP Photo/Don Wright)

PITTSBURGH (AP) — George Pickens called it back in April.

Minutes after the Pittsburgh Steelers selected the wide receiver in the second round of the NFL draft, Pickens described the team's decision to pair him with first-round pick Kenny Pickett as “ a blessing.”

Fast forward seven months and the combination the Steelers hoped would eventually flourish is thriving, perhaps even earlier than anyone anticipated. Well, maybe anyone other than Pickens.

No other skill position player on the Steelers — not 2021 Pro Bowl wide receiver Diontae Johnson, not tight end Pat Freiermuth, not running back Najee Harris — seems to engender as much trust in Pickett as the 6-foot-3 Pickens.

When Pickett finds himself in a tight spot, his eyes tend to drift toward Pickens' No. 14, regardless of where he may be on the field, one of the reasons Pickens leads the Steelers in receiving yards since Pickett took over at halftime of a Week 4 loss to the New York Jets.

The duo connected on two pivotal plays during the game-winning drive against Indianapolis on Monday night.

The first came on a dart over the middle on third-and-9, when Pickett delivered low and hard to Pickens for a 13-yard gain.

The second came on a 2-point conversion after Benny Snell's go-ahead touchdown run. The play broke down at the snap and Pickett scrambled to his right before spotting Pickens in the back corner of the end zone.

One fastball to Pickens' midsection later, the Steelers were up seven and a friendship that began during the pre-draft process took another important step forward.

No wonder T-shirts championing the burgeoning bromance already are popping up on both the internet and in the city's Strip District.

While they appear different on the surface — the supremely talented Pickens plays with a casual athleticism that frequently makes difficult catches look routine while the late-blossoming Pickett needed a fifth-year at Pitt to start turning the heads of NFL scouts — they approach the game and themselves with a similar attitude.

Asked to describe Pickett, Pickens might as well have been describing himself.

A competitiveness that dwells deep within Pickens, too. It's one of the reasons he spent a portion of the second half against the Colts moping on the sideline after a pair of uncharacteristic drops.

“I was just getting frustrated because I never want to be the reason we lost,” Pickens said.

Something that rarely happened to the 21-year-old Pickens during his college career at Georgia, even if a torn ACL in March 2021 appeared to put his junior year with the Bulldogs in jeopardy. He found a way to return in time for the SEC championship and the College Football Playoff, where Georgia won its first national title in 41 years.

The Alabama native considers the visit by Pittsburgh (4-7) to Atlanta (5-7) on Sunday a homecoming of sorts.

There will be a fair amount of friends and family in the stands at Mercedes-Benz Stadium, though Pickens insisted he's not in the mood to be sentimental, saying he's looking forward to taking the field with “a new group of guys.”

Particularly the quarterback he's building the kind of intangible but palpable chemistry with on seemingly every throw.

“He’s so unique and I think that’s what makes his play out there great, because he just is himself and he has that ultra-confidence, and I’m ultra-confident that he’s going to make the play,” Pickett said.

Pickens cautioned against confusing his confidence with arrogance. He started playing football when he was 4. While it looks as if things come easy, they haven't, even if the swagger he oozes makes it seem that way.

“I just always work hard,” Pickens said "The working-hard concept, it really is my confidence. That’s kind of how guys see it. It comes off as ‘he’s that guy’ when in reality (I'm) like chilling.”

That mentality allowed Pickens to rehab from a torn ACL at warp speed and make him the breakout star of training camp. What began with a series of eye-opening plays at Saint Vincent College in July and August has become a near-weekly occurrence in decidedly larger venues in the fall.