Burfict's appeal of suspension for rest of season denied 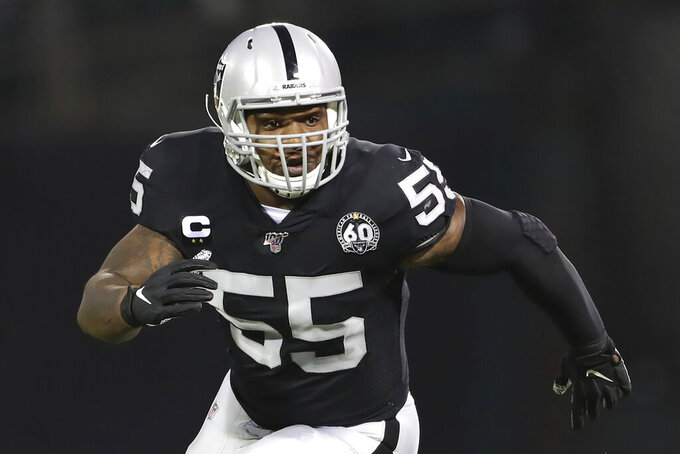 FILE - In this Sept. 9, 2019, file photo, Oakland Raiders linebacker Vontaze Burfict (55) runs to help make the stop on a rushing play during an NFL football game, in Oakland, Calif. Burfict has been suspended for the rest of the season for a helmet-to-helmet hit on Indianapolis Colts tight end Jack Doyle, on Sunday, Sept. 29, 2019. NFL Vice President of football operations Jon Runyan announced the suspension Monday.(AP Photo/Peter Joneleit, FIle)

Oakland Raiders linebacker Vontaze Burfict's appeal to overturn his suspension for the rest of the season for a helmet-to-helmet hit was denied Wednesday.

Appeals officer Derrick Brooks ruled he would not reduce the longest suspension ever handed down for an on-field infraction. Brooks is appointed jointly by the NFL and the NFLPA and heard Burfict's appeal of the ban for the final 12 games of the regular season and the playoffs.

Brooks upheld the decision handed down last week by NFL Vice President of football operations Jon Runyan to punish Burfict severely for "repeated violations of unnecessary roughness rules" after the latest hit on Indianapolis tight end Jack Doyle on Sept. 29. It was the third time Burfict has been suspended for a dangerous hit on the field to go along with several others that led to fines.

Burfict had one suspension reduced from five games to three games in 2017 but was unable to get a reduction again after a hearing that included testimony from Burfict and members of the Raiders, including coach Jon Gruden. His punishment is by far the biggest for an on-field play, topping the five games Tennessee's Albert Haynesworth got in 2006 for kicking and stomping on Cowboys center Andre Gurode's face, leading to 30 stitches.

"We're going to try to make our case," Gruden said Tuesday before testifying on Burfict's behalf. "I respect the league's position. They have a tough job. At the same time we have a lot of confidence that they'll do what's right. We want Burfict back. He's already been punished. We hope he can return to playing soon."

Burfict during his time in Cincinnati was repeatedly suspended by the NFL for egregious hits and violating its policy on performance-enhancers. He was fined regularly for hits that crossed the line, most notably the one to Antonio Brown's head that helped the Steelers rally for an 18-16 playoff win in the 2015 season. That led to a three-game suspension to start the 2016 season.

Burfict then was penalized for a blind-side block against Kansas City fullback Anthony Sherman in the 2017 preseason that led to a five-game suspension that was later reduced to three games.

But it was that history that led to this punishment, with Runyan telling Burfict in a letter that he "continued to flagrantly abuse rules designated to protect yourself and your opponents from unnecessary risk."

Burfict was brought in because of his extensive knowledge of coordinator Paul Guenther's scheme and had a key role as captain and signal caller to make sure Oakland ran it properly.

Tahir Whitehead took over as signal caller in Burfict's absence and played every snap and the Raiders played almost exclusively in nickel defense in last week's win over Chicago in London. Nicholas Morrow played all but two snaps and no other linebacker got in the game on defense.

"You have to give Nick and Whitehead a lot of credit, they played the whole game," Gruden said. "They played every play. They didn't come off the field. They played great. That doesn't undermine that we miss Vontaze, his leadership and his experience, play-making and all that stuff."

The Raiders are off this week and no one was available for comment. The team resumes play on Oct. 20 at Green Bay.