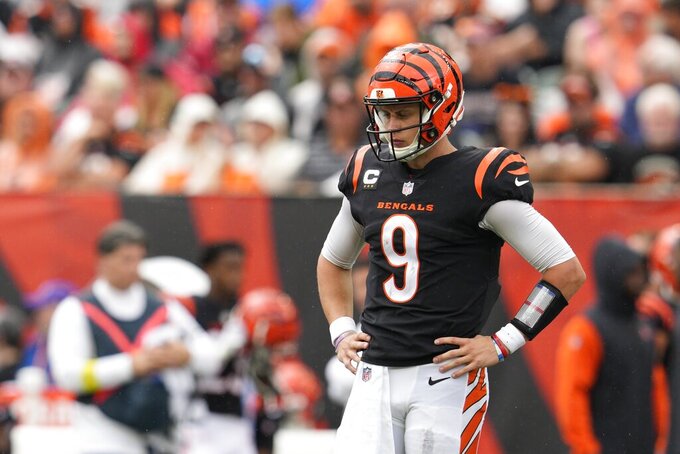 Cincinnati Bengals quarterback Joe Burrow (9) pauses between plays during the first half of an NFL football game against the Pittsburgh Steelers, Sunday, Sept. 11, 2022, in Cincinnati. (AP Photo/Jeff Dean)

TURNOVER DIFFERENTIAL: Bengals minus-5; Cowboys even.

BENGALS PLAYER TO WATCH: RB Joe Mixon had 27 carries for 82 yards for the defending AFC champs in the opener, resulting in the lowest per-carry average (3.04 yards) among his 10 career regular-season games with at least 25 carries. The Cowboys allowed Leonard Fournette of the Bucs to average 6 yards per carry (127 yards on 21 carries) in their opener. Mixon could be in for a big day if the Bengals commit to the running game that way again, and the Cowboys can't solve their issues with run defense (152 yards overall). Mixon also had 63 yards receiving in the opener.

COWBOYS PLAYER TO WATCH: QB Cooper Rush is making his second career start, both in place of an injured Dak Prescott. The first was a 20-16 victory at Minnesota last year when Rush threw a 5-yard touchdown pass to Amari Cooper in the final minute. The sixth-year player is expected to make multiple starts this time after Prescott sustained a fracture near his right thumb in the fourth quarter of the opener. The Cowboys weren't planning to put Prescott on injured reserve, meaning they think there's a chance he can return within four games. Still, there's little question Rush is set for multiple starts this time, rather than one.

KEY MATCHUP: Bengals WR Ja'Marr Chase vs. Cowboys CB Trevon Diggs. Joe Burrow's top target had a strong start with 10 catches for 129 yards and a touchdown against the Steelers. The Dallas secondary gave up two completions of at least 20 yards on the first Tampa Bay possession, and Mike Evans beat Diggs on a 19-yarder to start the second possession. Diggs didn't have an interception after having at least one in each of the first six games last season on the way to 11. Teams haven't been afraid to challenge Diggs despite the lofty interception number of last season. Burrow and the Bengals should be no exception.

KEY INJURIES: Bengals WR Tee Higgins is questionable after sustaining a concussion in the opener. Besides Prescott, the Cowboys have three other players already ruled out, including two starters. S Jayron Kearse injured his left knee against Tampa Bay, and LG Connor McGovern sprained his right ankle on the first series. DE Tarell Basham has a thigh injury. WR Michael Gallup (torn ACL in January) appears closer to a return, but at least another week away.

SERIES NOTES: The Cowboys have a four-game winning streak, the longest in the infrequent series. There are five teams the Cowboys have faced fewer times than the Bengals. The only home loss for Dallas in the series came in 1988. That was the second of two seasons in the 1980s in which the Bengals lost to San Francisco in the Super Bowl.

STATS AND STUFF: Burrow is looking for a bounce-back after accounting for all five Cincinnati turnovers in a minus-5 showing against Pittsburgh. The third-year QB led a rally that had the Bengals in position for a win before multiple mishaps from normally reliable K Evan McPherson let the Steelers off the hook. Burrow was 33 of 53 for 338 yards with two touchdowns and four interceptions. He dismissed suggestions that recovery from a July appendectomy was still affecting him. ... Burrow surpassed 7,500 career yards passing against the Steelers, matching Kurt Warner for the third-fewest games needed to reach that mark at 27 behind Patrick Mahomes (24) and Justin Herbert (26). ... CB Chidobe Awuzie and RT La'el Collins of the Bengals will face their former team for the first time. Awuzie signed in free agency in 2021, and Collins joined the Bengals after the Cowboys released him this past offseason. ... Both teams have issues/concerns with their offensive lines. The Bengals gave up seven sacks, while the Cowboys allowed four sacks and eight QB hits. Prescott's injury came on a pass when his right hand bent awkwardly after making hard contact with the raised hands of rushing LB Shaq Barrett. ... Cincinnati held Pittsburgh to 64 second-half yards and lost despite outgaining the Steelers 432-267. Meantime, the Cowboys were the only team that didn't score a touchdown in Week 1 after finishing last season as the NFL's top scoring offense. ... Bengals DE Trey Hendrickson has at least half a sack in eight consecutive road games. ... Rush was 24 of 40 for 325 yards with two touchdowns and an interception for a 92.2 rating against the Vikings last season. ... In his first game as the No. 1 receiver for Dallas, CeeDee Lamb had just two catches on 11 targets. Of the 17 other receivers with at least 10 targets in Week 1, none had fewer than five grabs. ... Reigning NFL Defensive Rookie of the Year Micah Parsons had two sacks in the opener, giving him 15 in the first 17 games of his career. Only John Abraham (15 1/2 for 2000-01 New York Jets) had more in his first 17 games. Parsons matched Joey Bosa, Jevon Kearse and Aldon Smith. He already has the most multi-sack games (four) in the first two seasons in club history. ... Second-year DT Osa Adighizuwa had a career-high two tackles for loss against the Bucs.

FANTASY TIP: Cowboys RB Ezekiel Elliott had 171 scrimmage yards (134 rushing, 37 receiving) and two TDs rushing in his only home meeting with the Bengals. That was in 2016, when Elliott was All-Pro as a rookie and won the first of two rushing titles in three seasons. Word of warning: Elliott hasn't been anywhere near that form the past two seasons.