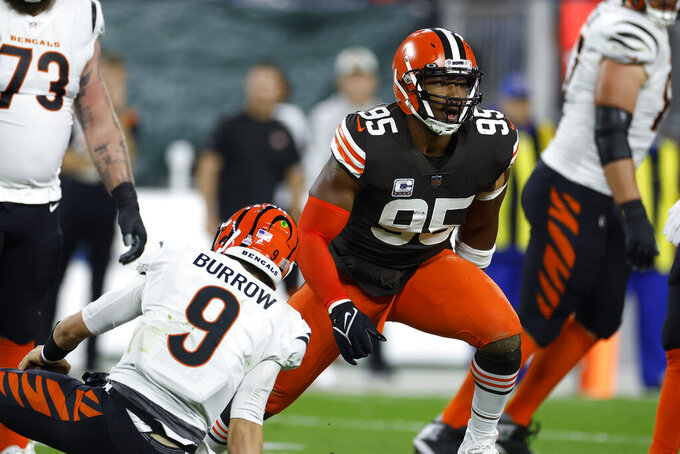 CLEVELAND (AP) — Joe Burrow barely looked like himself, and it had nothing to do with any kind of silly costume or mask.

The Browns made Burrow and the Cincinnati Bengals almost unrecognizable.

Under pressure from Cleveland's defensive line from the first snap, Burrow had little time to throw and the Bengals were overmatched 32-13 on Monday night by the Browns, who ended a four-game losing streak and stayed unbeaten against Cincinnati's quarterback.

The Bengals (4-4) were down 25-0 in the fourth quarter before Burrow threw two touchdown passes that made the score a little less lopsided. The rest of this Halloween night was tilted Cleveland's way.

Burrow fell to 0-4 in four career starts against Cleveland, a team the Ohio native hasn't been able to solve.

“They’ve had our number the last couple of years," said Burrow, who finished 25 of 35 for 232 yards and one interception. "They always play well against us, they have real good players in defense and are really well coached.”

Burrow was sacked five times, and came close to being thrown down several others.

It started out OK for the Bengals, who drove into Cleveland territory on their first possession before Burrow's pass was tipped by Browns All-Pro defensive end Myles Garrett and intercepted by cornerback A.J. Green.

The next time Cincinnati got the ball, Garrett, who came to FirstEnergy Stadium dressed as Vecna, the scary villain in the TV series “Stranger Things,” sacked Burrow, who was under major duress all night.

“He’s one of the elite of the elite in the game," Burrow said of Garrett. "He’s always going to make plays, like he did tonight.”

Nothing went for the right the Bengals, who were outrushed 172-36.

Cincinnati's defense, which didn't give up a second-half touchdown in its first seven games, allowed three in the second half — on consecutive drives.

Without Chase, Burrow didn't have his favorite target and a player capable of scoring from anywhere on the field. Chase is expected to miss several weeks, and the Bengals need to quickly figure out how to cope without him.

“Ja’Marr is going to do what he needs to do to get back," Burrow said. "Any time that guy goes down, it’s going to have an effect.”

Bengals coach Zac Taylor didn't have any immediate answers for what went wrong. There's plenty for him and his staff to fix and little time to do it with a game against Carolina on Sunday.

“The game was 25-0 before you even know it,” Taylor said. "We just didn’t come back. The worst thing to do against the Cleveland Browns is to give them a two, three score lead with their running game and their pass rush.

“We flush this one away quickly and get ready for Carolina.”

The Bengals were out of rhythm from the outset. Some of that was because of Cleveland's defense and some of it was Cincinnati failing to execute.

“We just weren't playing collectively,” said wide receiver Tyler Boyd, who caught a 13-yard TD in the fourth. “We couldn't get into that rhythm, couldn't get that big catch to get the offense going and we needed to protect Joe better.”

The Bengals fell to 0-3 in the AFC North, but Burrow isn't worried.

“We're not panicking,” he said. "We know what went wrong in each game. We have to go back and watch the film, make our corrections in this one like we always have and come back out firing next week.”

NOTES: CB Chidobe Awuzie left the stadium on crutches and his right knee immobilized. Taylor said the injury appears to be severe. ... CB Tre Flowers (hamstring) left in the fourth quarter and didn't return. ... CB Eli Apple was inactive due to a hamstring injury. ... DE Sam Hubbard was taken X-rays on his left hand after the game.