Canceled combine a bummer but invite still a golden ticket 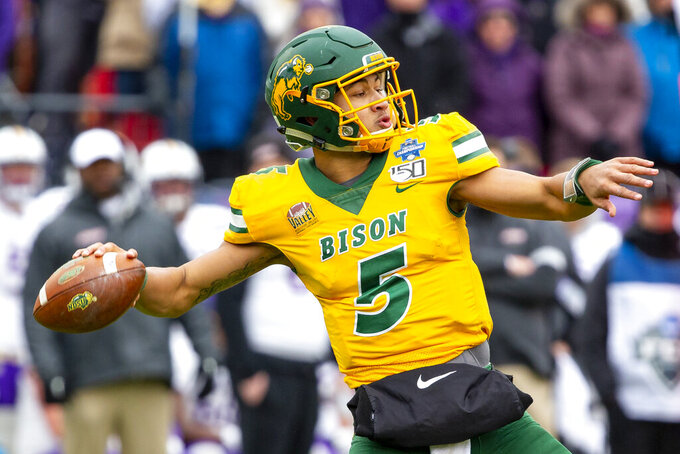 FILE - In this Saturday, Jan. 11, 2020 file photo, North Dakota State quarterback Trey Lance (5) winds up to throw during the first half of the FCS championship NCAA college football game against James Madison in Frisco, Texas. The NFL announced last month that some of the top prospects were being invited to Cleveland. The league is hoping to incorporate some of the city’s best-known locations along Lake Erie: FirstEnergy Stadium, home of the Browns; and the Rock & Roll Hall of Fame. (AP Photo/Sam Hodde, File)

“It was a dream of mine since I was a little kid to go to the combine," Moore said. “So, once I had seen a couple on Twitter got the combine invite, I was taking a shower, checked my phone.”

Then, it hit him.

"Checked my spam on one of my old email addresses from when I was at Northern Iowa and it was in there,” Moore said. “So, my uncle, his wife, and my fiancée were all out in the living room and I started screaming when I was in the shower.”

They came running. What was the fuss all about?

The annual NFL scouting combine in Indianapolis was canceled because of the pandemic, leaving prospects to show off for scouts, coaches and general managers at their college pro days instead.

While players lamented the lost opportunity to gather in Indy and square off against their peers, an invitation to the combine was still considered a golden ticket for the 323 prospects who were “invited” to the reimagined combine (really, 103 pro days spread out over several weeks on college campuses this spring).

“It’s not fun not being able to be there and get that experience. But at the end of the day it’s what made today so important," Moore said at Kansas State's pro day.

The scouting combine has morphed from a small gathering of players and talent evaluators to an annual event that even went prime time last year just before COVID-19 upended everything. The annual get-together is the capstone to college football careers for the 300-plus invitees who get to see how they stack up against their peers in their draft class, or even historically.

“We’ve been watching it since we were little and that’s something that we look forward to,” Oklahoma running back Rhamondre Stevenson said. “It’s kind of a bummer not being able to do it."

Scrapped along with the combine were visits to team facilities, leaving Zoom calls as the way to get to know players.

“That's something that all of us college players going into the draft look forward to, the combine,” Stevenson said. "But I think I had the upper hand by going to the Senior Bowl and talking to a lot of scouts and showcasing my game there. Then, I had a second chance here at my pro day. I'm blessed.”

For those who didn't get to the Senior Bowl, their pro day was their one and only shot to show off in front of NFL teams.

"But life and football are all about making adjustments. It’s what you have to do.”

Northwestern O-lineman Rashawn Slater looked at the bright side: He had 10 teammates on hand at the Wildcats' pro day.

“It's definitely nice to be able to do it around all my guys,” Slater said, adding that being around them “one last time was really cool.”

“As far as the combine getting canceled, I knew it was a possibility from the start,” Slater said. "So, my focus was just being prepared for whatever happens, control what I can control. It's unfortunate, but it wasn't something I was super upset about.”

Georgia Tech punter Pressley Harvin III said things could have been worse: “It easily could have been the case not to have a pro day because things were continuing to snowball or get worse” with COVID-19.

“I would love to have gone to the combine. It’s an experience you really get only one time," Harvin said.

“I mean, I’m still grateful for the invite," said Michigan State defensive tackle Naquan Jones. "There’s a lot of guys that weren’t invited. I can add that credential, that I was there.”

North Dakota State quarterback Trey Lance threw two passes as a freshman, put up a monster 2019 season, saw 2020 fall victim to COVID-19 and spent the last few months preparing for his jump to the pros while his teammates played a spring season.

“The biggest challenge was the combine being canceled," Lance said. “Not having that opportunity, that's something you dream of. My dad went to the combine. So, that was something I was looking forward to.”

Lance's father, Carlton, was a cornerback at Southwest Minnesota State who played in the Canadian Football League and the World League of American Football.

Along with no combine, NFL teams were prohibited from interacting with the prospects in person this spring.

Lance said it was a challenge "not being able to meet teams face to face. Zoom meetings, they're good, but being able to shake hands and meet with them and get up on the board a couple of feet away would've been really cool and an awesome experience.”

Lance is expected to be one of the first few players picked in the draft next week.

It's guys like Arkansas quarterback Feleipe Franks who really could have used a normal offseason, complete with the combine. At least he got to play in the Senior Bowl.

“When you think about what we're going through right now with the pandemic, you have fewer opportunities to get in front of scouts with the combine being canceled," Franks said. “So, it was a great experience to go out and meet players from all across the country, some of the best. To go out there and compete with those guys, so many different personalities, it was just awesome.”