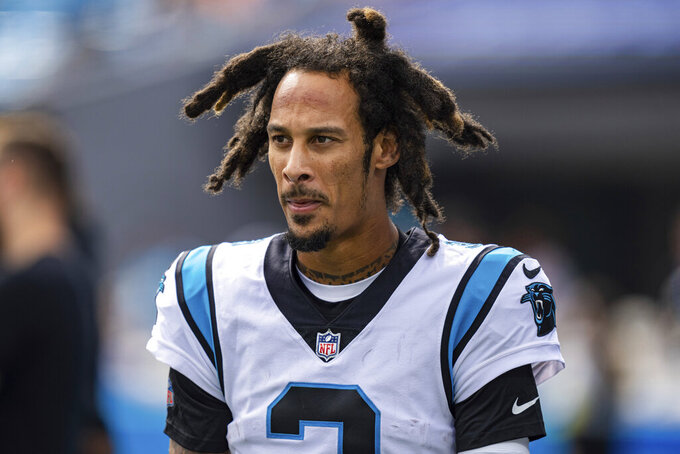 FILE - Carolina Panthers wide receiver Robbie Anderson looks on before an NFL football game against the San Francisco 49ers, Oct. 9, 2022, in Charlotte, N.C. The Arizona Cardinals have made a move to bolster their struggling offense, adding disgruntled receiver Anderson in a trade with the Panthers on Monday, Oct. 17, 2022. (AP Photo/Jacob Kupferman, File)

TEMPE, Ariz. (AP) — The Arizona Cardinals have made a move to bolster their struggling offense, adding disgruntled receiver Robbie Anderson in a trade with the Carolina Panthers on Monday.

Both teams announced the deal, saying the Panthers would receive “undisclosed draft compensation” in return.

The trade could be beneficial to both sides: Anderson's days in Carolina appeared numbered after he was sent off the field and into the locker room by interim coach Steve Wilks during the second half of the Panthers’ 24-10 loss to the Los Angeles Rams on Sunday, following a sideline argument with an assistant coach.

The Cardinals were in the market for an impact receiver, particularly after the team’s leading receiver Marquise Brown suffered a foot injury in Sunday’s loss to the Seahawks. Coach Kliff Kingsbury said Brown is expected to miss several weeks.

“Had an opportunity to get a guy who brings some speed with that dynamic (Brown) had,” Kingsbury said. “So we'll see where he fits in."

The Panthers will save $690,000 this year under the salary cap for the trade, but will have to absorb $19.4 million in dead money over the next two seasons.

The 29-year-old Anderson has been durable and productive for the Jets and Panthers over the past seven seasons. His best year came in 2020, when he caught 95 passes for 1,096 yards and three touchdowns.

Anderson joins a Cardinals offense that will also welcome back three-time All-Pro DeAndre Hopkins, who missed the season's first six games after being suspended for violating the NFL's performance-enhancing drugs policy.

The Cardinals host the Saints on Thursday night.

“I spoke with Robbie today and we had a good conversation with him," Wilks said. "I wish him well and he’s excited about his new opportunity. I’m sure he is going to go out there and do well.”

The Cardinals (2-4) hope that Anderson's arrival — along with Hopkins' return — can open up an offense that's been among the worst in the NFL.

Arizona's coming off a frustrating 19-9 loss to Seattle. The Cardinals didn't score an offensive touchdown in the game.

The Cardinals hope Anderson will be happier than he was in Carolina, which is going through its own upheaval after firing coach Matt Rhule last week following a slow start to the season.

Anderson was close with Rhule. The receiver played for Rhule in college at Temple, and signed with the Panthers in 2020 when Rhule became the coach.

During the first half of the Panthers' game on Sunday, Anderson got into an argument with receivers coach Joe Dailey. He was on a stationary bike early in the third quarter before sitting alone on a cooler.

Anderson came off the field late in the third quarter when he again exchanged words with Dailey. That was the last straw for Wilks, who got between the two and sent Anderson to the locker room.

Neither Wilks nor Anderson seemed committed to a long-term future in Carolina after Sunday's sideline dustup. One day later, he was sent packing for the desert.

“It’s going to sting a little," Panthers receiver D.J. Moore said. "At the end of the day, Robbie is my guy and I will love him until the end of it all. He got traded today and that’s what it is. It’s a business. I wish him all of the best.”