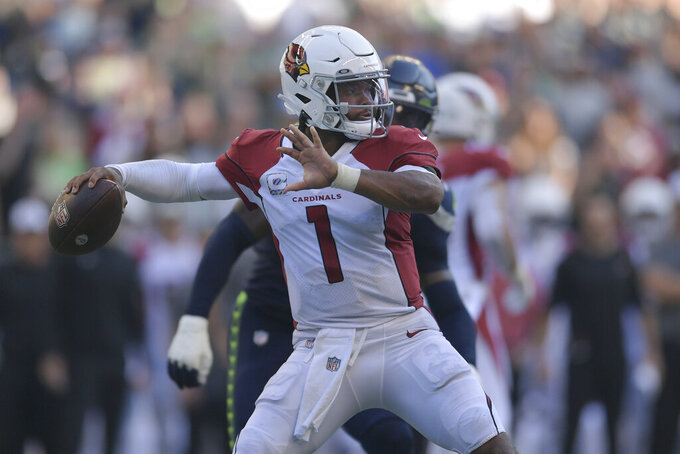 Arizona Cardinals quarterback Kyler Murray (1) passes against the Seattle Seahawks during the second half of an NFL football game in Seattle, Sunday, Oct. 16, 2022. (AP Photo/Caean Couto)

And even his return might not solve the problems plaguing coach Kliff Kingsbury, quarterback Kyler Murray and the underwhelming Arizona offense.

“Probably rookie year is the last time (stuff) has felt this hard,” Murray said. “It’s tough out there right now. That’s what it feels like. And like I said, it’s self-inflicted.”

Murray and the Cardinals had another frustrating day filled with missed opportunities, failed conversions and some questionable decision-making as they lost 19-9 to the Seattle Seahawks on Sunday.

The Cardinals have lost three of four, and in each of those losses their chances have been doomed by a lack of offense.

Arizona’s defense is doing its job. But the Cardinals' offense again failed to get started, this time against a Seattle team that came into the game ranked 32nd in yards allowed and 31st in scoring defense.

“No, not as a coach, just not being able to find a rhythm as an offense. New to me,” Kingsbury said. “We’re going to continue to work at it. Personnel-wise, see how we can move things around, scheme-wise see how we can be better. Because it’s a six-game view and it hasn’t been good enough.”

The Cardinals have been short-handed. Top running backs James Conner and Darrel Williams were inactive against Seattle with injuries. Eno Benjamin rushed for 37 yards on 15 carries, but Murray was Arizona’s top ball-carrier with 10 rushes for 100 yards.

Murray finished 23 of 37 for 222 yards passing, but was sacked six times and intercepted on a forced throw late in the fourth quarter. It was the third time in Murray’s career and first since 2019 that he was sacked at least six times.

Arizona has also missed Hopkins, the standout wide receiver whose six-game suspension for violating the league's policy on performance-enhancing drugs ends this week. Hopkins will be eligible to play on Thursday night when the Cardinals host New Orleans.

“He’s gonna be anxious to get the ball in his hands and be super competitive. We need him to lift us up, there’s no question, with how we’re playing right now,” Kingsbury said.

Hopkins had 42 receptions and eight touchdowns last season while playing in just 10 games. In 2020, his first season with the Cardinals, Hopkins had 115 receptions.

His return could be even more important after Marquise Brown suffered a left ankle injury late in Sunday's loss. Brown said X-rays were negative but he left the locker room in a walking boot.

“We can’t finish. That’s the moral of the story right now. We’re not finishing drives. Not putting the ball in the end zone. Can’t win like that,” Murray said.

The Cardinals ended their scoring drought in the first quarter this season, getting a 23-yard field goal from Matt Ammendola on their opening drive. But the offense didn't score again.

Arizona turned the ball over on downs three times inside the Seattle 30 rather than sending Ammendola, who's filling in for the injured Matt Prater, out to try field goals. Kingsbury said he probably would have kicked on a couple of those chances if Prater had been healthy.

Arizona’s only touchdown came in the third quarter when Seattle punter Michael Dickson fumbled in the end zone under a perfectly executed punt rush and was recovered by Chris Banjo for a score.