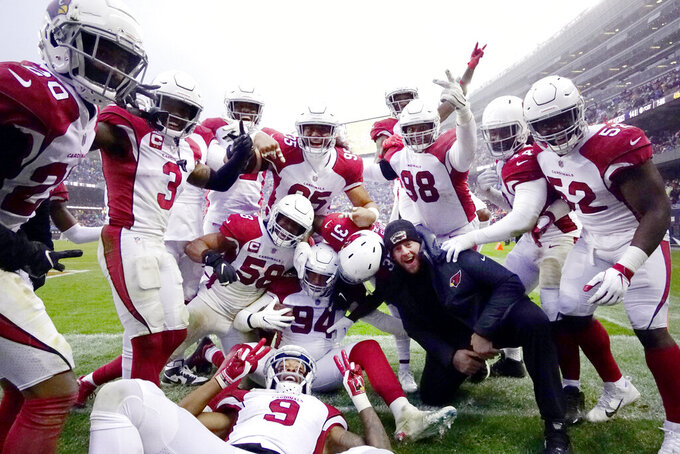 Zach Allen sniffed out the screen pass and the Arizona Cardinals defensive lineman lifted his big left hand out to the side, snagging the football out of midair and lumbering toward the end zone.

He didn't quite make it.

“I've definitely got to work on the run after the catch,” Allen said grinning. “I was excited. I just ran in a straight line.”

It was a very minor critique in a great defensive day for the Cardinals, who had four interceptions in Sunday's 33-22 win over the Chicago Bears. Arizona has a 10-2 record, he best in the NFL.

The Cardinals enjoyed the return of quarterback Kyler Murray and star receiver DeAndre Hopkins in Chicago. Both players were back after missing three straight games with injuries. Murray threw two touchdown passes, including one to Hopkins, and also ran for two more touchdowns.

Arizona was able to be conservative on offense in cold and wet conditions in Chicago largely because the defense kept giving it great field position with the interceptions. The team's takeaways have been constant this season: The Cardinals rank second in the NFL with a plus-12 turnover differential.

“It's the No. 1 stat,” Cardinals coach Kliff Kingsbury said. "You look year in, year out, if you traced it back 20 years, you see teams that are playing in the playoffs, playing in championship games are really high in the plus side. The teams that aren't having great years are usually down at the bottom.

“That, to me, it's the biggest stat in football.”

The Cardinals are a team that can push the ball through the air but make no mistake, this team can run.

Arizona threw the ball just 15 times in Sunday's win, opting to usually stick to the ground in the cold and ran. James Conner ran for 75 yards while Murray added 59. Kingsbury said he hadn't been a part of a team that ran that much since “flag football when I was in sixth grade maybe” but added that he's glad the team was able to adjust.

“That's not what I'm accustomed to doing," Kingsbury said. “I don't think anybody was. We had a lot of angry wideouts and tight ends. I understood it - I didn't like playing that style either. But that's what it took to win.”

The Cardinals continue to live dangerously on offense with ill-timed fumbles and some tough third-down penalties. Arizona's fumbled 27 times this season yet somehow lost only three. That's a trend that probably won't continue if the Cards keep putting the ball on the ground.

Safety Jalen Thompson has progressed from a steady starter to one of the Cardinals' most crucial defensive players. He had one of the team's four interceptions and added 10 tackles. His sure tackling has been a big reason Arizona's been able to limit the opposing team's big plays.

Thompson is one of GM Steve Keim's most shrewd acquisitions over the past few years. The safety was picked up in the fifth round of the 2019 supplemental draft out of Washington State.

Rookie linebacker Zaven Collins played just three snaps against the Bears as his playing time has evaporated to almost nothing. The No. 16 overall draft pick was expected to be the team's defensive star of the future, but it's clear that if it happens, it's going to take time.

The Cardinals hope Collins can make a big jump in the near future, much like last year's first-round pick Isaiah Simmons.

Simmons played sparingly as a rookie in 2020 before becoming one of Arizona's most reliable players this season.

The Cardinals are as healthy as they've been in several weeks. Murray and Hopkins are back and the team hopes RB Chase Edmonds, G Justin Pugh and long snapper Aaron Brewer return soon.

6 — Who says warm-weather teams can't play in the cold? The Cardinals now have a six-game winning streak in games when the temperature at kickoff is 40 degrees or less.

One of the strange parts of Arizona's season is that it's been incredible on the road and just OK at home. The Cardinals are 7-0 away from Arizona and 3-2 at State Farm Stadium.

The Cardinals have three of their final five games at home, starting with the Los Angeles Rams next Monday night. All five of the final games will be played indoors.

“We haven't been the same team at home that we've been on the road,” Kingsbury said. “We've talked about that. We're doing some things to try to adjust that.”