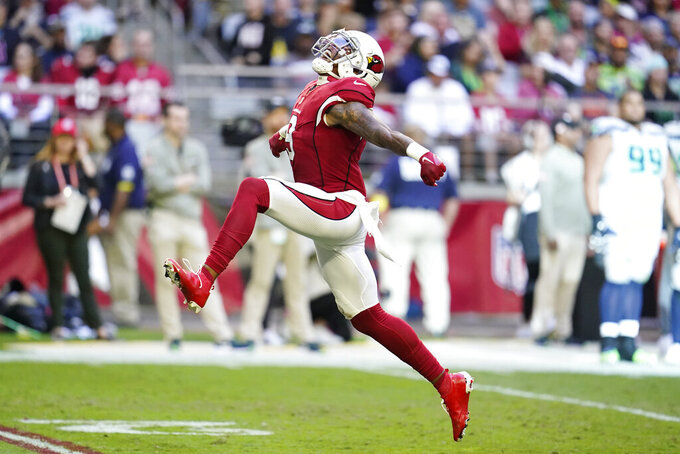 Yet the stakes seem fairly high for these two struggling NFC West rivals in their second meeting of the new season, and it's because both realize they're running out of time to write a proper sequel to last year's successes.

“We ain’t got too much more room to keep losing now,” said Donald, the Rams’ seven-time All-Pro. “It’s time to find a way to go on a run. Go week to week and just keep trying to stack up wins.”

The Rams (3-5) are two games under .500 for the first time in coach Sean McVay's career after losing four of their last five games. The Cardinals (3-6) have also lost four of five, and coach Kliff Kingsbury doesn't exactly have the same ironclad job security as McVay.

After Los Angeles — which has won 11 of the last 12 meetings in this matchup — hosts Arizona at SoFi Stadium on Sunday, the loser will be in a formidable hole in last place in the division.

The Rams' struggles rest almost squarely on an offense that ranks 31st in the NFL in total yards, thanks to multiple significant injuries on an already subpar offensive line, a nonexistent running game and a lack of skill-position playmakers beyond Cooper Kupp. What's more, quarterback Matthew Stafford may not play against the Cardinals after entering the NFL's concussion protocol on Tuesday.

The Cardinals' woes are more balanced between an ineffective defense and an underachieving offense. Arizona has allowed at least 31 points in three straight games and must face Los Angeles without injured leading tackler Budda Baker, while the offense is struggling to find a groove in which Kyler Murray can orchestrate the dominant performances of early last season.

“For whatever reason, we haven’t reached a level we all know we can play at,” Kingsbury said. "The one thing you don’t want to do as a competitor is underachieve an entire season. I think that’s where we’ve been, and it’s time to get over it.”

It’s fair to say Kingsbury’s job status has never been this tenuous during his four seasons with the Cardinals.

Arizona has a 4-11 record, including the playoffs, since starting last season with a 10-2 mark. Kingsbury is 27-30-1 over his four seasons, and the Cardinals brass has seen little return on its high-profile investments since early last season.

“There’s a lot to chatter about all of us, I’m sure,” Murray said. “I try to stay away from all the negativity. Obviously, this has been a negative kind of season so far compared to last year. When you set that expectation to play well, and as well as we started early last year, everybody’s going to feel that and expect that.”

Donald has a long track record of success against the Cards in his career, and he can now face an Arizona offensive line missing three starters on the interior: Justin Pugh, Rodney Hudson and Will Hernandez. Donald and his fellow Rams pass rushers have struggled to rack up big numbers this season with many of their opponents focused on a quick passing game, but Donald is eager to add to his 6 1/2 career sacks of Murray.

Arizona linebacker Zaven Collins has grown into the impact player the franchise expected when it drafted him with the No. 16 overall pick in 2021. Collins is second on the team with 61 tackles, and he had a 30-yard interception return for a touchdown in last week's loss to Seattle.

It has been a big jump since his rookie season, when he struggled to stay on the field because of injuries and uneven performances. He had just 25 tackles last season.

The Rams expect Murray to play even though he missed practice Wednesday with a hamstring injury, but his absence wouldn't significantly change Los Angeles' planning, defensive coordinator Raheem Morris said.

“You've got to prepare for their system,” Morris said. “Colt McCoy is his backup. Very similar skill set. Obviously, Kyler is extremely fast and explosive and all those things, but they'll do some of the same things in the game plan. I know Colt well from (a season together in) Washington. He's a very good backup. ... Hopefully you don't have to prepare for the 42-yard run that (Murray) can absolutely explode on if Colt goes out there. Hopefully it's more like a 10-yard run. Don't tell Colt."

If Stafford misses the first game of his Rams tenure, McVay expects to turn to John Wolford, a backup in Los Angeles since 2019. Wolford made his first career start against Arizona in 2020 when Jared Goff was sidelined by a thumb injury, and the undrafted Wake Forest product led the Rams to the playoffs with a victory in Week 17.

Wolford has barely played in the NFL since injuring his neck in the first quarter of the subsequent playoff game, but McVay is confident in his mastery of the Rams' offense.

“Football is really important to him,” McVay said. “I think he’s got a great ability, too. He’s got the athleticism, but he’s got the ability to be able to make a lot of the different types of throws.”