Carl Nassib happily back with Bucs after being selective 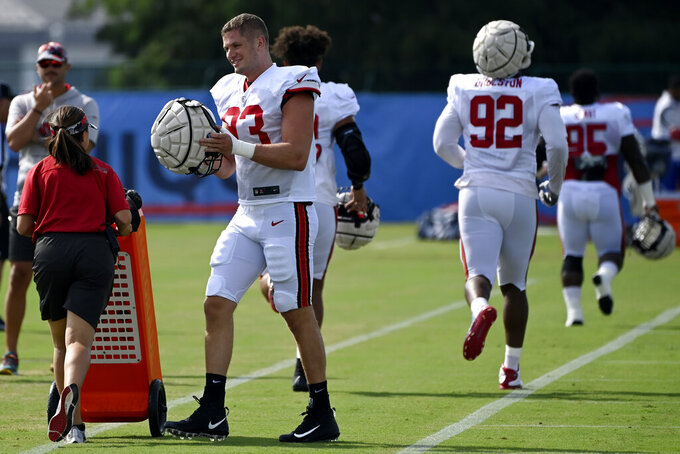 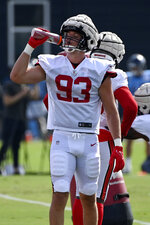 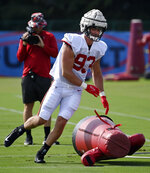 NASHVILLE, Tenn. (AP) — Carl Nassib has a new number with one of his old teams, and the outside linebacker couldn't be happier playing with Shaq Barrett again even if their Tampa Bay reunion came Wednesday in a different city.

“Shaq was killing it today," Nassib said. "I mean he’s an All-Pro guy, and I’m excited to keep learning from him and to get a chance to work with him again is pretty fun.”

The Buccaneers signed the outside linebacker who became the NFL's first active player to come out as gay in 2021 in time for a joint practice Wednesday with the Tennessee Titans. Nassib flew to Nashville to join a team he played for in 2018 and 2019.

Nassib had 12 1/2 sacks combined over 29 games with the Bucs, the best of his six-year career. Barrett led the NFL with 19 1/2 sacks in 2019. Tampa Bay coach Todd Bowles said that connection was one of the reasons they decided to bring Nassib back.

“We have a good relationship with him,” Bowles said. “We thought he could still play. We thought he’d be great because he brings a lot of versatility to what we do, and he knows the system. So knowing the system, having the ability to still play and have a camaraderie with the guys was important for us.”

Nassib had been waiting to sign with a team since he wrapped up a two-season stint with the Las Vegas Raiders, including playing 13 games last season. He wasn't surprised at the wait before signing.

“I was being selective, and this was a great opportunity that I couldn’t pass up,” Nassib said.

Nassib wore No. 94 with Cleveland, his first stint with Tampa Bay and the past two seasons with the Raiders. He started talking with the Bucs a couple of days ago with outside linebacker Cam Gill dealing with a Lisfranc injury from the Bucs' preseason opener, and now he's wearing No. 93 because it was available.

He hadn't gotten a playbook before hitting the field Wednesday for the first of two joint practices before Saturday night's exhibition with Tennessee (0-1). Little has changed with the Bucs since Nassib's last game with them.

“I still got my same friends, still have the same coaches from when I was here," Nassib said.

One big change from when he last wore a Bucs' uniform is that Nassib came out as gay in June 2021 in an Instagram post because representation and being visible matters. Nassib said the response has been nothing but a blessing since then.

"And it’s a new year, and I’m excited to be a football player again. I’m excited to just go out there show what I can do and help the team anyway that I can.”