Carr, Raiders beat Colts 23-20 to close in on playoff spot 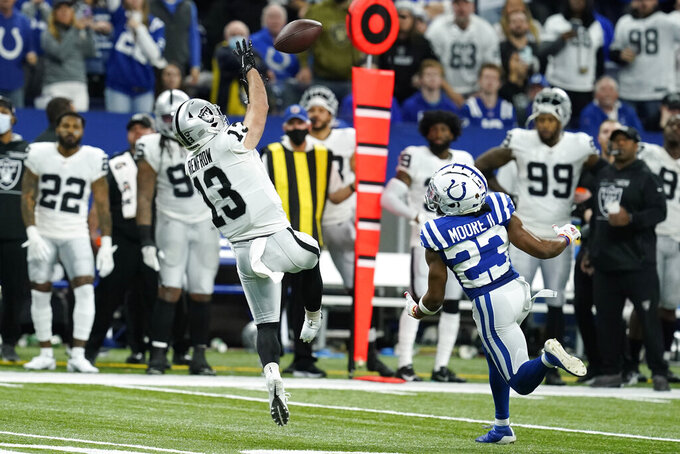 INDIANAPOLIS (AP) — Derek Carr and Las Vegas lost a late touchdown on a replay reversal. They surrendered a TD on a fluke play. They committed the only two turnovers of the game.

And they won. Welcome to another high point of a roller-coaster season for the Raiders.

Carr directed Las Vegas to Daniel Carlson's 33-yard field goal as time expired, and the Raiders beat Jonathan Taylor and the Indianapolis Colts 23-20 on Sunday to move one step closer to an AFC wild card.

Rallying after an embarrassing email scandal that led to coach Jon Gruden’s resignation, the Raiders (9-7) earned their third straight win. They can wrap up an improbable playoff spot with a victory over the Los Angeles Chargers next weekend.

“We're finding a way to do it because we have the right kind of guys,” Carr said, "and there's never been a doubt, there's never a finger pointed, you know, at this or that, and this coach is not there, and all this kind ... nobody cares.

“We have a bunch of guys that believe that and just keep going.”

After Michael Badgley kicked a tying 41-yard field goal for Indianapolis with 1:56 left, Carr and the Raiders got the ball back at their 25 after a touchback. Carr found Hunter Renfrow for 24 yards on third-and-10 in the final minute, setting the stage for Carlson's fourth game-winning field goal of the season.

Renfrow's clutch catch was originally ruled a touchdown after he got up and ran into the end zone, but the call was changed when a replay review showed he was touched down.

“I'm glad I was,” Renfrow said, “because then we were able to run the clock down and give Daniel another game-winning field goal.”

Carr threw two interceptions, giving him a career-high 14 on the season, but he also had 255 yards and a touchdown through the air. Zay Jones had eight receptions for 120 yards, and Renfrow finished with seven grabs for 76 yards.

“I'm just wired, my mind, my heart, just that way, to love those moments,” Carr said.

Indianapolis (9-7) had won three straight and eight of 10 to move one win away from a postseason berth. But it couldn't hold a second-half lead against Las Vegas.

“Disappointing loss, really disappointed we didn’t do what we had to do in front of our home fans and clinch a spot in the playoffs,” coach Frank Reich said.

Taylor finished with 20 carries for 108 yards and a touchdown. The NFL's leading rusher broke Edgerrin James' single-season franchise record of 1,709 yards rushing on a 9-yard carry midway through the third quarter. He has 1,734 yards to go with one game left in the league's first 17-game season.

Carson Wentz was 16 of 27 for 148 yards and a touchdown, shaking off a slow start after he spent much of the week on the COVID-19 reserve list.

“Definitely one of the weirdest weeks of my NFL career if not the weirdest,” Wentz said. “But we’re good, locked in the virtual meetings. Just different, wouldn’t say that’s the reason for the performance or the reason we lost today by any means. Just a strange, strange week.”

Wentz got his touchdown pass on a fortunate bounce for Indianapolis on its first possession of the second half.

On first-and-10 at the Las Vegas 45, a scrambling Wentz threw the ball into a crowd at the goal line. Wide receiver Ashton Dulin and defensive backs Casey Hayward and Tre’von Moehrig all went up to make a play, and the ball popped up before landing in the arms of T.Y. Hilton for a 17-13 lead.

Hilton took a bow in the end zone after perhaps the easiest of his 53 career receiving touchdowns.

The Raiders went back in front on Carr's 11-yard touchdown pass to Renfrow on fourth-and-2 with 11:18 left in the fourth. Carr scrambled to his right before throwing to an open Renfrow in the end zone.

“I can't say enough about the chemistry between him and Derek,” interim Raiders coach Rich Bisaccia said, “and his ability to understand the field and get himself in open positions.”

Las Vegas had a 10-3 lead late in the first half when a couple of mistakes helped keep the Colts in the game. Rookie guard Alex Leatherwood was flagged for a false start and Carlson sent a kickoff out of bounds, leading to Taylor's 1-yard TD run with 1 second left.

The Raiders played with a small “JM” sticker on the back of their helmets to honor Hall of Famer John Madden, who died this week at age 85. Madden coached the Raiders to a win in Super Bowl 11 before becoming the league's most influential broadcaster.

A pregame tribute video drew a big cheer from the crowd, and there was a moment of silence in Madden's memory.

Colts: Close out the regular season at Jacksonville next Sunday.