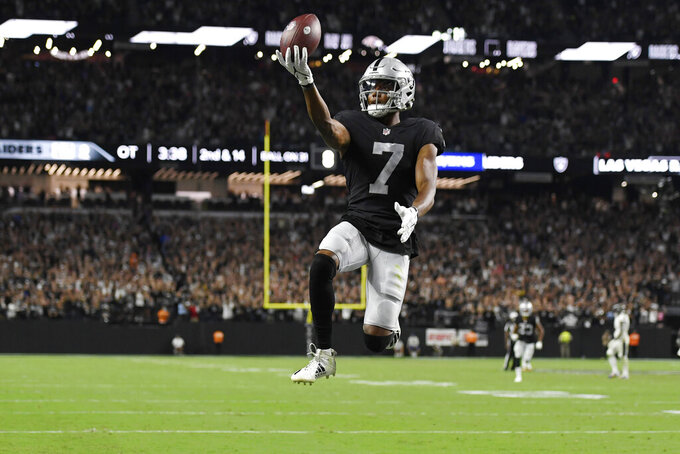 LAS VEGAS (AP) — After a premature bench-clearing celebration and a couple of blunders that almost cost the Raiders the game, the party could finally begin for real after the first game with fans in Las Vegas.

The Raiders won an exhilarating and exhausting season opener thanks to a furious rally, a stellar defensive play from Carl Nassib and a perfect play call that produced a 31-yard touchdown pass from Derek Carr to Zay Jones that gave the Raiders a 33-27 win over the Baltimore Ravens on Monday night.

“Felt like I died and woke up. And died. And woke up again," coach Jon Gruden said. “I was like a cat — I had multiple lives.”

Carr engineered three game-tying drives in the fourth quarter and before winning it in the wild overtime.

He appeared to win it with a 33-yard TD pass to Bryan Edwards on the first possession of overtime only to have the celebration halted when replay put the ball at the 1.

An unsuccessful QB sneak, a false start from rookie Alex Leatherwood and then an interception that deflected off Willie Snead's hands appeared to cost the Raiders the game.

Then Nassib delivered the strip sack of Lamar Jackson in his first game since becoming the first active NFL player to come out as gay in the offseason.

“I’m really happy that we got we got the win on the day that kind of made a little bit of history,” Nassib said.

The Raiders then made another blunder by committing a delay of game before a field goal try, leading to Gruden sending the offense back on the field.

The Ravens sent a blitz and Carr lofted a pass that Jones ran under for the score, sending the Raiders pouring out on the field for a second celebration.

“I’m glad coach trusted us, put it in our hands at the end,” Carr said. “Because it always feels good to win that way, especially when you almost gave away.”

The Raiders trailed 14-0 early, ending a 98-game, regular-season win streak for the Ravens when leading by at least 14 points dating to 2004.

The loss capped a rough stretch for the Ravens, who have had a run of injuries that sidelined top three running backs J.K. Dobbins, Gus Edwards and Justice Hill, as well as cornerback Marcus Peters, for the season.

They had won the past five openers by a margin of 177-26, but came up short in this nail-biter thanks to a strong game from Carr, who threw for 435 yards .

The overtime came after a wild back-and-forth fourth quarter that featured the Raiders rallying to tie the game on three separate occasions, with Carr driving Las Vegas to a tying 55-yard field goal in the final 37 seconds.

The Ravens had taken the lead when Jackson scrambled 28 yards to help set up Justin Tucker's 47-yard field goal.

But Jackson is still haunted by the two late fumbles.

“That ticked me off,” he said. “I hate any type of turnover.”

The Raiders earlier got a forced fumble by Quinton Jefferson against Jackson to set up Josh Jacobs' 15-yard TD run, tying the game at 17. The Ravens answered when former Raider Latavius Murray ran it in from 8 yards one play after Jackson found Sammy Watkins on a mismatch for a 49-yard pass.

Carr then connected on a 37-yard pass to Henry Ruggs III that set up a tying 10-yard TD to Darren Waller with 3:44 to play.

Jackson's TD pass to Marquise Brown in the first half was a spectacular individual effort. He escaped pressure from Maxx Crosby and Yannick Ngakoue and scrambled before finding Brown in the back of the end zone for a 10-yard score.

According to NFL NextGen stats, Jackson took 7.84 seconds to throw for the fifth longest on a TD pass in the past five seasons and scrambled 27 yards for his most ever on a TD.

The Ravens went for it twice on fourth down in the first half, getting a 35-yard TD run from Ty'Son Williams on the first. Murray got stuffed by K.J. Wright on the second.

The Raiders got stopped on a fourth-and-1 run by Jacobs at the Ravens 13 in the third quarter.

The Raiders got off to a sluggish start offensively after sitting most of their starters in the preseason. A holding penalty and botched snap spoiled a promising first drive that reached the Ravens 21 before going backwards and ending in a punt.

They then scored twice late in teh half to make it 14-10 at the break.

Ravens: G Tyre Phillips was taken off the field on a cart late in the first half after injuring his leg and didn't return.

Ravens: Host Kansas City on Sunday night. Baltimore has lost four straight against the Chiefs, including all three matchups between Jackson and Patrick Mahomes.