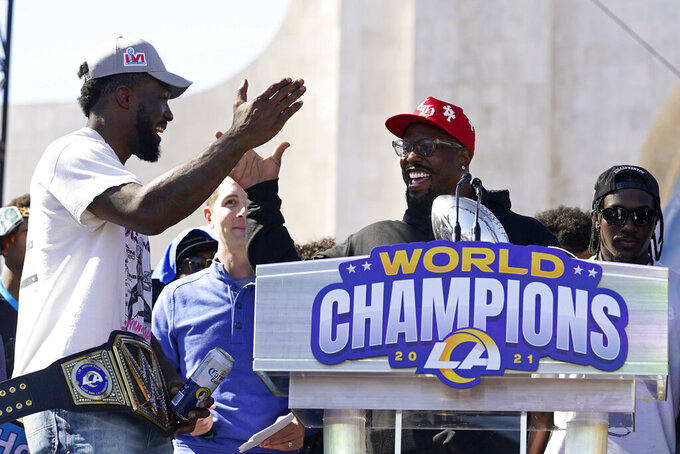 NEEDS: The Super Bowl champions say they are eager to run it back with as many contributors as possible, and they'll explore contract extensions and restructures to create the salary cap room to do it. Miller and Beckham must decide whether to take bigger money elsewhere or to stick with a winner. Both veterans fill important needs if they elect to stay, but the Rams traded for both stars knowing they could be short-term rentals. Los Angeles already is fairly solid at receiver if Robert Woods returns at full strength. If Miller goes, the Rams will be in the market for the next candidate to fill the role previously held by Dante Fowler and Miller as the veteran pass rusher who excels alongside Aaron Donald. Los Angeles' offensive line avoided a major overhaul by re-signing longtime backup left tackle Joseph Noteboom and starting center Brian Allen. Right guard Austin Corbett could still leave, and left tackle Andrew Whitworth is expected to retire. Williams' likely departure will force the Rams to explore free agency for a new starter at cornerback opposite Jalen Ramsey, although they also have internal candidates. With any remaining cap room, the Rams would love to bolster their talent at linebacker, where they took a significant downgrade last season and still won the title.