Chance to work with Fields was big draw for Bears' Eberflus 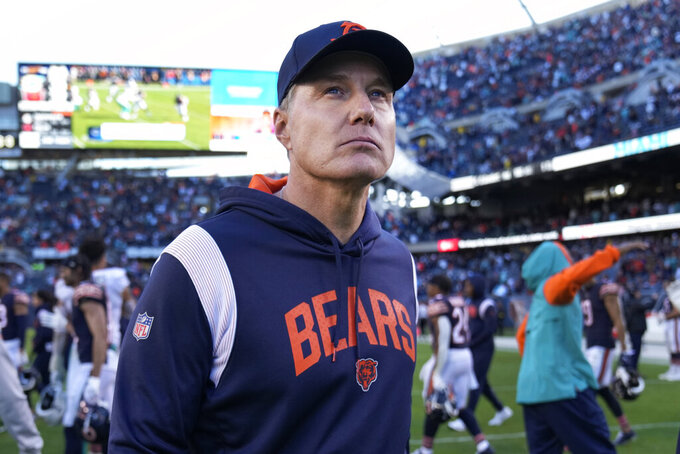 LAKE FOREST, Ill. (AP) — Matt Eberflus saw the tantalizing potential in Justin Fields. The chance to unlock it was a big draw in accepting the Chicago Bears' coaching job in January.

“When you’re looking at different types of places to go, you take spots for that reason,” Eberflus said Monday. “The No. 1 spot you look at is quarterback. You study and look at that and I loved what I saw.

"I’m loving what I’m seeing even more since I’ve been here for this amount of time.”

What he is witnessing appears to be the emergence of a franchise quarterback.

Fields sent another strong signal he just might be the man for that role with his latest dazzling performance Sunday. Though the Bears (3-7) lost 31-30 to the struggling Detroit Lions, he was something to see again.

Fields ran for 147 yards and two touchdowns, including a 67-yard dash to the end zone. He also threw for two scores.

He did all that on the heels of a breathtaking performance in a loss to Miami. He ran for 178 yards against the Dolphins — the highest rushing total by an NFL quarterback in a regular-season game since at least 1940.

Fields had already strung together several promising performances. But what he has done the past two weeks is nothing short of jaw-dropping.

Fields' 325 yards rushing are the most by an NFL quarterback in a two-game span. Baltimore's Lamar Jackson had the previous high of 268 on Oct. 13 and 20, 2019. Fields also has 555 yards the past five weeks, the most in a five-game span by a QB in the Super Bowl era.

His speed and elusiveness is tough for opponents to replicate in practice. And it can wear down defenses during games.

“This play could go on five seconds, six seconds, and you’ll get fatigued,” Lions coach Dan Campbell said. “You’re wanting to just lunge at him at some point because your legs are burning. So you got to be very disciplined.”

The run game. The Bears remained atop the NFL in rushing at 201.7 yards per game, with Fields leading the way. They also became the first team in the Super Bowl era with at least 225 yards rushing in five straight games after going for 258 against Detroit.

Fields, obviously, is a huge part of that. He ranks sixth in the NFL with 749 yards rushing and is averaging 7.2 per carry — second to Jackson.

But Khalil Herbert is also playing a big role. The second-year pro ran for 57 yards on 10 attempts against Detroit. He has 643 yards and is averaging 6 per carry to go with four touchdown runs.

The defense. Though rookie Jack Sanborn got his first two sacks, the Bears couldn't come up with the stops down the stretch. Chicago gave up three touchdowns in the fourth quarter, and the defense was responsible for two. The Bears allowed Jared Goff and the Lions to go 91 yards on eight plays for the go-ahead touchdown in the closing minutes.

“They (the offense) gave us, continue to give us everything they’ve got," safety Eddie Jackson said. "Go up 14, let them drive down the field. You know, especially stuff like that the game won’t allow it. We’ve got to get these stops. We’ve got to be better on third downs. That’s about it.”

TE Cole Kmet. The Chicago-area product had one of the best games of his career with four catches for 74 yards and two touchdowns. That included a 50-yard score. Kmet has 11 catches and five TD receptions in the past three games. It's quite a turnaround, considering he didn't catch a pass in the first two games of his third season.

CB Jaylon Johnson. Johnson, He has been dealing with an oblique injury and allowed Tom Kennedy to beat him for a 44-yard reception on a third-and-8 that set up Detroit's winning touchdown. He was also flagged for illegal use of the hands, negating an interception by Sanborn deep in Chicago territory, on a TD drive early in the fourth quarter.

Eberflus declined to provide an update on Herbert (hip), who was hurt returning a kickoff near the end of the game. ... Kmet said Monday he was fine after limping off the field following a collision with Lions CB Jeff Okudah late in the game. He was hit near the thigh.

The Bears visit Atlanta with the Falcons coming off losses to the Los Angeles Chargers and Carolina Panthers. That has led to more questions about quarterback Marcus Mariota.