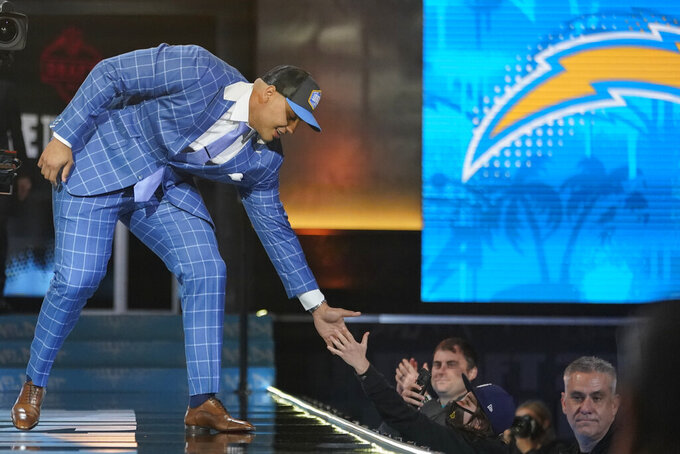 Northwestern tackle Rashawn Slater greets fans after he was chosen by the Los Angeles Chargers with the 13th pick in the NFL football draft Thursday April 29, 2021, in Cleveland. (AP Photo/Tony Dejak)

Jaimes provides the Chargers with a swing tackle and also has the versatility to line up at guard after taking some snaps inside during the Senior Bowl.

The draft is another step in the revamp of an offensive line that graded third worst in pass blocking and last in run blocking last year, according to Pro Football Focus. During free agency, Los Angeles signed All-Pro Corey Linsley from Green Bay and made him the highest-paid center in the league, along with inking guards Matt Feiler and Oday Aboushi.

“I mean we went into this offseason knowing changing four starters on the offensive line was kind of a big project to take on. Quite frankly, I thought it may be more of a two-year project to do,” Telesco said. “I’m happy with what we have right now in front of us. It's never perfect but I feel good about it now.”

How quickly a new unit can come together in what is expected to be a limited offseason of workouts and with a first-year coach in Brandon Staley will be one of the key stories going into training camp.

Considering the Chargers lost Hunter Henry in free agency, there was some expectation they might look for a receiving tight end during the first two days. They did address the position in the third round by taking Georgia's Tre’ McKitty, but he is known more as a blocker.

However, the Chargers need as much help as they can get at the line of scrimmage, especially in short-yardage situations. Their 62.5% success rate on third-and-1 runs was sixth worst in the league last season.

“At that position, it’s hard, coming out of college to find players that do that. A lot of tight ends are out in the slot, and they’re excellent receivers, but we do need somebody to kind of handle that role at the line of scrimmage," Telesco said.

WHO ELSE THEY GOT

After leaning heavily on defense two years ago (five of seven picks) and offense last year (four of six), this draft was evenly balanced with five on offense and four defense. The biggest beneficiary might be special teams as most of the selections do have experience on return and coverage units.

Besides the linemen and McKinney, the Chargers took Tennessee wide receiver Josh Palmer in the third round and Missouri running back Larry Rountree III in the sixth.

HOW THEY DID IT

Staley and Telesco used their new assistants' connections to college programs for some of their picks. Secondary coach Derek Ainsley knew Palmer well from his time at Tennessee and running backs coach Derek Foster was at Iowa for three seasons.

Los Angeles still needs to add depth in the secondary, linebacker and offensive line over the next months. There is a possibility it could add players following post-June 1 cuts by teams.