Chargers find a way to rally, close out in Staley's debut 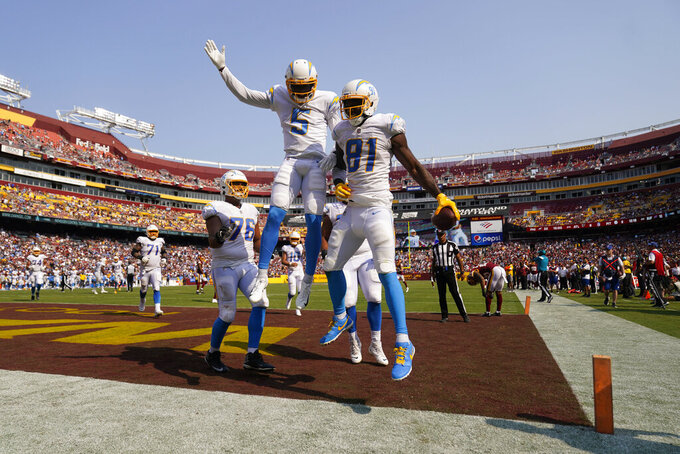 The Brandon Staley era has started with something the Los Angeles Chargers were not able to do the past two seasons: win a close game after experiencing adversity.

Sunday's 20-16 victory over the Washington Football Team was especially satisfying considering the Chargers were 7-16 in one-score games in 2019 and '20 after making the postseason in 2018.

“It is huge. You always have to find a way to win and pull it out. I know last year it seemed like we were doomed with losing these types of games,” said receiver Mike Williams. “Regardless of the situation we have practiced it a lot (during training camp).”

The Chargers appeared to be going in for the go-ahead score early in the fourth quarter when Justin Herbert was picked off at the WFT 5-yard line with 12:16 remaining. But on the next play, Kyzir White forced Antonio Gibson's fumble and Kenneth Murray recovered at the Washington 3. Williams scored the winning touchdown on a pass from Herbert three plays later.

The offense then came up big again later in the fourth quarter with a 15-play drive to run out the final 6:43.

“There were a couple times when Washington was able to grab the momentum and we had things that happened that could have been deflating, but we were able to respond right away,” Staley said. “I really felt like it was a team win.”

For the most part, Staley had to be pleased with how his team did in his first game. The new offensive scheme featured a lot of quick passes as five players had three or more receptions. The defense was able to get consistent pressure on quarterbacks Ryan Fitzpatrick and Taylor Heinicke.

The Chargers won their opener for the third straight season, but still have a tough stretch. After hosting Dallas, LA travels to Kansas City before hosting Las Vegas on “Monday Night Football.”

After being a major point of emphasis during the offseason, the new-look offensive line had a great debut with only two sacks and eight quarterback pressures allowed, per Next Gen Stats. Left tackle and first-round draft pick Rashawn Slater did not allow a pressure, while right tackle Storm Norton was solid after Bryan Bulaga did not play in the second half due to a back injury.

The Chargers had six penalties for 94 yards, with three being 15 yards or more. Joey Bosa picked up a pair of roughing-the-passer calls and rookie Asante Samuel Jr. was flagged for pass interference during the second quarter, which ended up being for 35 yards. Washington's longest play on offense was for 34 yards when Terry McLaurin made a great catch near the sideline on a play when safety Nasir Adderley should have defended the man instead of the ball.

Williams had a career-high eight receptions for 82 yards. Williams has been used as a deep threat for most of the past two seasons, but he was mostly utilized on short and intermediate routes against Washington.

Punt returner K.J. Hill had a rough game. Instead of fielding Tress Way's first punt near the sideline on the LA 31, he let it bounce an additional 19 yards and out of bounds, causing the Chargers to start at the 12. Hill also played the bounce on his lone return, which resulted in only a 3-yard gain.

Bulaga (back tightness) remains day to day. Adderley has a hip flexor injury, but Staley said he expects him to practice on Wednesday.