Chargers' JC Jackson out for season with right knee injury 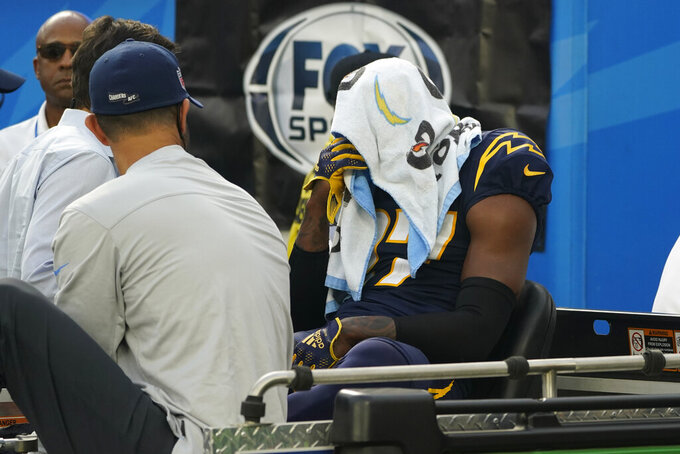 Los Angeles Chargers cornerback J.C. Jackson (27) is carted off the field due to an injury during the first half of an NFL football game against the Seattle Seahawks Sunday, Oct. 23, 2022, in Inglewood, Calif. (AP Photo/Marcio Jose Sanchez)

COSTA MESA, Calif. (AP) — Los Angeles Chargers cornerback JC Jackson will miss the rest of the season after he ruptured the patellar tendon in his right knee during the second quarter of Sunday’s game against the Seattle Seahawks.

Coach Brandon Staley said surgery has not yet been scheduled.

Jackson’s knee appeared to give out as he was attempting to elevate while contesting a touchdown catch by Seattle’s Marquise Goodwin in the end zone. The Seahawks went on to win 37-23 and snap the Chargers' three-game winning streak.

Jackson was left clutching his knee on the turf and was down for several minutes while being tended to by trainers.

Medical personnel put an air cast on Jackson’s right leg before he was carted to the locker room.

Jackson signed a five-year, $82.5 million contract with the Chargers after New England did not place the franchise tag on him. He had struggled in his first season with the Bolts after having ankle surgery late in the preseason.

The Chargers (4-3) are already missing outside linebacker Joey Bosa after he underwent groin surgery four weeks ago. Staley said Bosa is back in California to continue his rehab with the possibility he could return late in the season.

Los Angeles — which will be on its bye this week — will also be missing wide receiver Mike Williams for multiple games after he suffered a high ankle sprain during the fourth quarter.