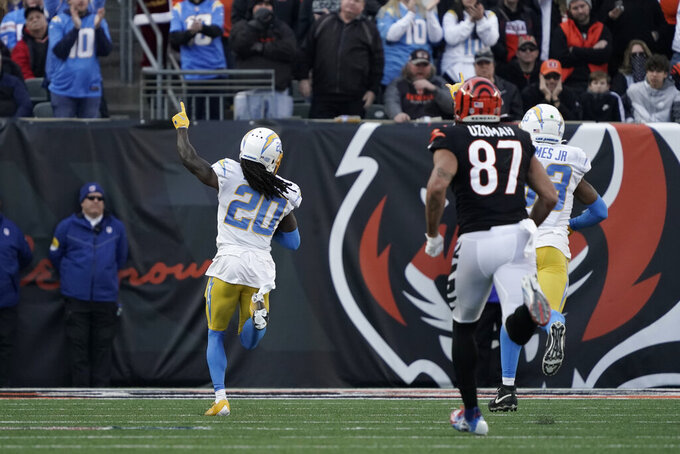 Los Angeles Chargers' Tevaughn Campbell (20) celebrates a fumble recovery for a touchdown during the second half of an NFL football game against the Cincinnati Bengals, Sunday, Dec. 5, 2021, in Cincinnati. (AP Photo/Jeff Dean)

BETTING LINE: Chargers by 10 1/2, according to FanDuel SportsBook.

TURNOVER DIFFERENTIAL: Giants plus-4; Chargers plus-1.

GIANTS PLAYER TO WATCH: OLB Azeez Ojulari. The second-round pick from Georgia ranks third among all rookies with 6 1/2 sacks and seven tackles for loss. Chargers QB Justin Herbert has taken 25 sacks, four coming in the win in Cincinnati, so there should be opportunities for Ojulari to show his pass rush skills.

CHARGERS PLAYER TO WATCH: OLB Uchenna Nwosu. It seems like Nwosu is starting to mesh with head coach Brandon Staley’s defensive schemes, as Nwosu has three sacks in the past three weeks. Two came against the Bengals, his single-game high, and his next sack will set a career high in his four seasons as a professional. Sustaining a more versatile pass rush could be the difference for the Chargers as they push for a playoff berth.

KEY MATCHUP: Giants LT Andrew Thomas and RT Nate Solder vs. Chargers OLB Joey Bosa. With massive uncertainty at the offensive skill positions for New York this week, the offensive line has to step up. In the loss to Miami, they allowed seven tackles for loss and three sacks. Minimizing those negative plays and staying on schedule will be vital for the Giants to have any shot against the high-flying Chargers. Bosa had a sack in four straight games before being held in check by Cincinnati, so he’ll want to get back on track in his pursuit of another double-digit campaign.

KEY INJURIES: Giants QB Mike Glennon will start after clearing the NFL's concussion protocol. Daniel Jones remains sidelined because of a neck injury. … Glennon will likely have a makeshift collection of pass catchers to target. WR Kadarius Toney (oblique/quad), Kenny Golladay (ribs), and Sterling Shepard (quad) are banged up, while electric RB Saquon Barkley is dealing with an ankle injury. … Chargers WR Keenan Allen is out, CB Chris Harris Jr. and WR Mike Williams are in COVID-19 protocol and could test out before Sunday and play, Staley said.

SERIES NOTES: The Chargers have won four straight against the Giants. … New York’s last victory in the series happened in 1998, 34-16 in San Diego. … The Giants won the first two games against the Chargers, defeating them at Yankee Stadium in 1971 and at Shea Stadium four years later. … Los Angeles started its current streak by scoring a series-high 45 points to beat New York by 22 in 2005. … Bosa had two sacks and one tackle for loss against the Giants in 2017.

STATS AND STUFF: Leonard Williams is tied with Pittsburgh’s Cameron Heyward for most tackles by a defensive lineman with 61. Williams, who starred at Southern California, ranks second on the Giants with 5 1/2 sacks. … TE Evan Engram leads the Giants in receptions (35) and touchdown catches (2), and his 334 yards receiving are second on the team. Engram is on pace to become the sixth NFL TE with 40 receptions in each of his five seasons. … A loss will guarantee the Giants their fifth straight losing season. ... New York has lost four straight on the road. ... Los Angeles LB Kyzir White needs four tackles for his first 100-tackle season. White and S Derwin James Jr. (100) will be the first Chargers teammates to reach the century mark since Hall of Famer Junior Seau and Rodney Harrison in 2000. … The Chargers and Arizona Cardinals share the league lead with eight strip sacks. Bosa has accounted for three of them. … Herbert’s 58 touchdown passes in his first two seasons are second only to Dan Marino’s 68 in NFL history. … Los Angeles has scored 40 points in the third quarter, failing to score coming out of halftime in its past two games.

FANTASY TIP: With Allen and possibly Williams out of the lineup, WR Jalen Guyton suddenly becomes a useful option. He had four receptions for 90 yards against the Bengals, including a 44-yard touchdown catch. Guyton has speed to get behind defenses, but his targets have tended to be few and far between as long as Allen and Williams have been there to dominate looks in the passing game.