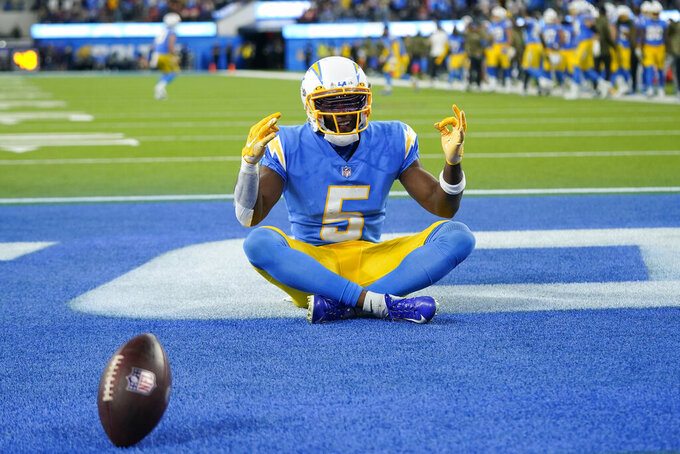 GLENDALE, Ariz. (AP) — Say what you want about the Los Angeles Chargers — at least they're interesting.

It makes sense that after all those ups and downs, the Chargers are stuck with a 5-5 record when they travel to face the Arizona Cardinals (4-7) on Sunday.

The Chargers are coming off a tough 30-27 loss to the Chiefs last Sunday. Kansas City scored a touchdown with 31 seconds left to rally for the win.

“What happened last week and the week before that, it’s part of the league,” Chargers coach Brandon Staley said. “You’re going to have stretches like that where you have really tough ones that you feel like you are right there and you don’t make them.

"It’s what you do moving forward.”

Arizona's had some strange trends as well. The Cardinals have a 1-4 record in their home stadium this year and are just 4-9 in Arizona over the past two seasons. They're 11-3 in road games over the same stretch.

The Cardinals are expecting two-time Pro Bowl quarterback Kyler Murray to return after missing the past two games with a sore hamstring. Arizona had a 1-1 record under backup Colt McCoy in Murray's absence.

Arizona has lost three of their last four games, including a 38-10 loss to the 49ers in Mexico City on Monday.

“The good thing about this locker room is you can tell there’s no give up," Murray said. “There’s no loss as far as mentality when it comes to the fight. Man, these guys are motivated every week and show up with a smile on their face. Obviously, there’s frustration with the results, but all you can ask for is these guys to show up, work hard, and believe. This season’s not over.”

The Cardinals could have one of the deepest groups of wide receivers in the league. The problem is they can't seem to get all of them healthy at the same time.

Three-time All-Pro DeAndre Hopkins should be ready to go for Sunday's game, but after that, there's a myriad of injuries. Rondale Moore (groin) is likely out vs. the Chargers while Greg Dortch's (thumb) status appears tenuous. Marquise Brown (foot) could return from IR this week, but it's hard to know how much he'll be able to play, if at all.

That could open opportunities for veterans A.J. Green and Robbie Anderson. Anderson was added in a mid-season trade from the Panthers, but hasn't produced much since his arrival.

“Both guys will have increased roles," Kingsbury said. "There’s no doubt. We’ll see, like I said, on (Brown) and then (Hopkins) will do what he does. Then (TE) Trey McBride’s got to continue to come on and make some plays for us.”

McBride could also get a bump in production since starter Zach Ertz is out for the season with a knee injury.

Justin Herbert and the Chargers offense looked like their old selves against the Chiefs. With the return of receivers Keenan Allen and Mike Williams, Herbert was able to go downfield more while also opening up the running game.

Williams' return was brief after he reinjured his right ankle in the first quarter. He is questionable to face the Cardinals after Staley said Williams didn’t do any additional damage to the ankle.

Los Angeles’ biggest concern on offense is playing better in the second half. They have been outscored 29-7 after halftime in the last two games.

“I think that in the second half, our execution just needs to be better. It’s not any facet of the run game or the pass game or what type of plays,” Staley said. “You have to get the explosions (explosive plays) no matter how you get them, run or pass. You have to stay away from negative plays. I think that has inhibited our progress in second halves this year.”

The Cardinals' 38-10 loss to the 49ers was particularly rough at the end, when Arizona's defense missed several tackles. George Kittle scored on a 32-yard touchdown in the fourth quarter after multiple Cardinals looked as though they could have taken him down.

Kingsbury stopped short of saying his team quit in the Mexico City loss.

He did say that more of his players need to be like Pro Bowl safety Budda Baker, who led the team with 10 tackles and was still playing hard at the end.

“We know when we sign up in this league, you’re a professional and you play to the end,” Kingsbury said. "That’s the standard of this organization and this team and nobody displays it more than Budda Baker. You couldn’t tell if the score was 38-10 in our favor or 38-10 down or 0-0, he’s going to be going the same speed and making every play he can."

The Chargers made massive upgrades to their defense during the offseason, but they continue to struggle in two important areas.

They have allowed at least 150 rushing yards in four straight games and teams are averaging a league-high 5.46 yards per carry.

Los Angeles has also struggled getting off the field on third down. Opponents have converted over half the time in three of the last four games after it happened only once in the first six contests.

“We need to get consistent stops to close the game,” safety Derwin James said.