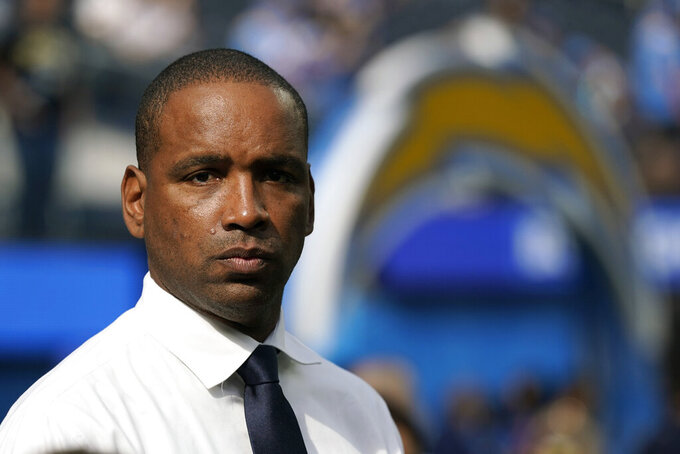 FILE - JoJo Wooden, director of player personnel for the Los Angeles Chargers, stands on the field as players warm up before an NFL football game between the Minnesota Vikings and the Los Angeles Chargers Sunday, Nov. 14, 2021, in Inglewood, Calif. JoJo Wooden is hoping that last year’s interview with Washington for the general manager opening serves as a springboard to other opportunities. Wooden, the Chargers' director of player personnel, has built up a strong resume in nearly 26 years within the league, starting as a scout with the New York Jets to now overseeing the Chargers' pro and college scouting operations. (AP Photo/Gregory Bull, File)

COSTA MESA, Calif. (AP) — JoJo Wooden thought after he was one of the final cuts by the Arizona Cardinals during training camp in 1993 that his best avenue to progress in football would be through coaching. He later discovered that scouting was his natural calling.

That decision has led to a 25-year career in NFL front offices and could land Wooden a general manager spot.

The 52-year-old Wooden oversees the Los Angeles Chargers pro and college scouting departments as Director of Player Personnel. He came to the Chargers in 2013 after a 16-year stint with the New York Jets.

Compared to coach Brandon Staley or general manager Tom Telesco, Wooden might not be an easily recognizable name to fans, but he is well-known in league circles. The NFL's Football Operations department has him on a short list of minority candidates that teams should consider when general manager openings occur during the upcoming offseason.

“The best thing I heard was from (former Jets GM) Mike Tannenbaum, who said he did not make a decision without checking with JoJo first about it,” Telesco said.

With college football winding down and the Chargers in the thick of playoff contention, offseason job prospects are the furthest thing from Wooden's mind.

“I’m just taking care of the task ahead,” he said. “I will always be prepared when I get an opportunity and just see what happens.”

Those who know Wooden best not only point to his football knowledge, but his lack of self promotion. Scott Pioli, a longtime mentor who first met Wooden at Syracuse University, said that has always been Wooden's way of operating.

“In a profession that has become very much about people self promoting, he still remains one of the most humble people I know. He's outstanding at what he does,” Pioli said. “Watching him develop, it makes me happy because he's done everything the right way throughout his career.”

After having only two Black general managers in 2020, the league made gains during the offseason with three of the seven vacancies filled by minority candidates. According to the NFL's 2021 Diversity and Inclusion report, 28 of the 59 GM candidates interviewed were minorities compared to only three the prior year.

Wooden received his first general manager interview this past offseason with the Washington Football Team. Even though he didn't the job — Washington ended up hiring Martin Mayhew — he considers it a good learning experience for the future.

“I enjoyed the conversations with coach (Ron) Rivera and (Dan) Snyder. You didn't know what was going to come from it, but it was a great opportunity to meet people you didn't know and learn their approach,” Wooden said.

Wooden discovered that scouting might be a better fit while he was an assistant coach at American International College, a Division II school in Springfield, Massachusetts. He said getting to know a player and their background along with analyzing their strengths and weaknesses appealed to him more than the coaching part.

Pioli was a graduate assistant at Syracuse when Wooden was a player. The two remained in close contact, and when Pioli went to the New York Jets as Director of Player Personnel in 1997, he hired Wooden as a scouting assistant. The entry-level job involved cataloging and cutting evaluation tapes, keeping the pro roster boards updated and watching tape for what was a tiny pro personnel department at the time.

Wooden stayed with the Jets when Pioli left to join Bill Belichick in New England in 2000. He spent his first 10 seasons in New York mainly working on the pro scouting side before being named assistant director of player personnel in 2007. The majority of Wooden's final six years with the Jets were related to college scouting, but he was also the only member of the personnel staff that had duties in both college and pro personnel.

During Wooden's 16 years with the Jets, he credits Dick Haley, Bill Parcells and Pioli for helping to teach him the scouting profession, along with former general managers Terry Bradway and Tannenbaum for their approaches.

He also worked with five different coaches and saw an ownership change when longtime owner Leon Hess died in 1999 and Woody Johnson won the rights to purchase the franchise in 2000.

Wooden came to the Chargers after the 2013 NFL draft when Telesco began to revamp football operations. Telesco was hired after the 2012 season, but moves in scouting and personnel departments largely do not occur until after the draft.

Telesco said Wooden's background operating in both college and pro scouting as well as staying with one team for 16 years appealed to him.

“When we come into the league, someone has to teach us about how the league works and putting a program together. He had some great people that he learned under,” Telesco said. “This is a heavy scouting job but also a lot of it is working in the office with coaches and pro scouts. He needs to have the short-term vision — like what running back we might have to sign to the practice squad — but also a long-term look at how college players will project.”

Wooden's ability to juggle many different responsibilities in season — from talking with scouts to checking with agents about certain players — might be his biggest quality. It is also what Wooden was looking for when he switched coasts.

“I’m definitely not the same person compared to when I first walked in here. I think I just know the league better,” Wooden said. “When I left New York, I was looking for just an opportunity to grow, see more and be exposed to more.”

The interview with Washington and a possible playoff appearance by the Chargers should bolster Wooden's prospects this offseason. He is also hoping that the hirings of Brad Holmes in Detroit and Terry Fontenot in Atlanta — who have similar resumes as Wooden — will benefit him.

“I think the hardest part is, I think you can have a plan of how you want to do it, but until you’re actually sitting in the seat, then that’s where you have to execute your plan,” Wooden said. “Things are going to pop up in your day other than football operations. You have to learn time management, balance that and have good people in place to be able what you want to accomplish.”