Chiefs aim to get on track as Giants visit Arrowhead Stadium 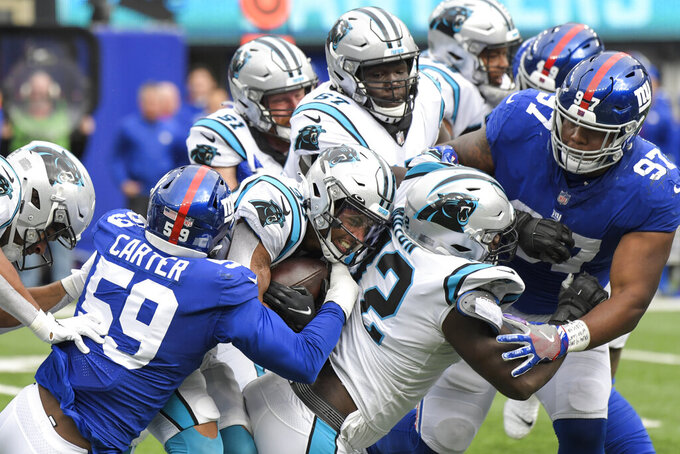 KANSAS CITY, Mo. (AP) — New York Giants coach Joe Judge made a good point about the struggling Kansas City Chiefs this week when he was asked whether the rest of the league had finally caught up to the two-time defending AFC champs.

“I mean, how'd the league catch up to them?” Judge asked. “Is everyone as fast as Tyreek Hill?”

Nah, the truth is Hill remains one of the fastest players in the league. And for all their warts, especially on defense, the Chiefs still have a dynamic offense with Patrick Mahomes pulling the trigger and Hill and Travis Kelce catching his passes.

“I think it's a foolish narrative for us to buy into,” Judge said, “if we think this team isn't as good as they are. This is a damn good team. They're explosive, they're very dangerous. These guys are going to be playing their best ball Monday night.”

That would be the first time this season.

The Chiefs (3-4) are near the bottom of the league in turnover differential at minus-10, and their defense — both on the ground and through the air — has been abysmal. They're coming off a 27-3 drubbing by Tennessee, and losses to the Bills, Chargers and Ravens means they have lost the tiebreaker to just about everyone ahead of them.

“We just kind of are not playing well enough,” said Mahomes, who will play Monday night despite taking a wicked blow to the head against the Titans. "It's just the little things here and there that we are not dong well.

“If it's a pass that I need to throw to a certain point, I'm missing the pass. If it's a shot downfield, we didn't get the ball out in exactly the right way. If you look at the talent overall, people are playing hard and doing what they need to do.”

If the Chiefs are going to get on track, the timing couldn't be a whole lot better.

The Giants (2-5) are coming off a solid win over slip-sliding Carolina, but they have only won one other game. Their offense has a bunch of injured skill players, including a lingering ankle injury to star running back Saquon Barkley, and the defense just lost playmaking safety Jabrill Peppers to a torn knee ligament.

It's the start of a stretch in which Kansas City plays five of six games at home with a bye week thrown in the mix.

“There’s a handful or two handfuls of things that we’ve got to get straight,” Chiefs coach Andy Reid said, "and that’s coaching and that’s playing. So, without going into a whole lot of detail because we’ve still got a lot of games here to play, the obvious I think is what you guys can see — and that’s got to be fixed.

Giants tight end Evan Engram is being paid $6 million after the club picked up his fifth-year option, but he missed the first two games of the season with a calf injury and then lost a fumble against Atlanta. Engram started showing signs of waking up last weekend, catching a team-high six passes for 44 yards. He is third on the team with 20 catches for 171 yards.

EATING UP THE DEFENSE

Mahomes is probably giddy thinking about facing the Giants defense.

Teddy Bridgewater threw for 264 yards and two TDs as Denver piled up 420 yards of offense in Week 1. Taylor Heinicke was 34 of 46 for 336 yards and two TDs in helping Washington gain 407 yards. Matt Ryan, Dak Prescott and Matthew Stafford also shredded the Giants. In fact, their only good showing was last week, when they limited Carolina to 173 yards.

Two pretty clear indicators of a defense's success are turnovers and sacks. Well, the Chiefs are near the bottom of the league with seven takeaways and they're tied for last with Jacksonville with eight sacks.

“I knew coming in that every game’s not given, it’s earned. You just have to earn wins in this league,” said Chiefs rookie Nick Bolton, who had a career-best 15 tackles and four tackles for loss against Tennessee last week. “We just have to continue to do that, continue to get better, and come in next week focused and ready to play.”

The Chiefs are still waiting for a No. 2 wide receiver to step up. Demarcus Robinson has played 72% of offensive snaps but has just 11 catches for 133 yards and two scores. Mecole Hardman has coughed up two fumbles. Josh Gordon is still trying to learn the offense and has one catch for 11 yards through his first three games.

“They’re explosive,” Giants safety Xavier McKinney insisted. “They’re able to make explosive plays, game-changing plays. They’ve got a lot of playmakers on their offense that are able to do a lot of things in space.”

The Giants are 6-20 against Super Bowl runners-up when they play the following season.

Last year, New York was crushed by the 49ers 36-9 at MetLife Stadium The loss was the Giants’ third in a row against teams defeated in the previous Super Bowl. Their most recent victory was on Dec. 2, 2007, against the Bears in Chicago.