Chiefs aim to turn season around with rare win over Giants 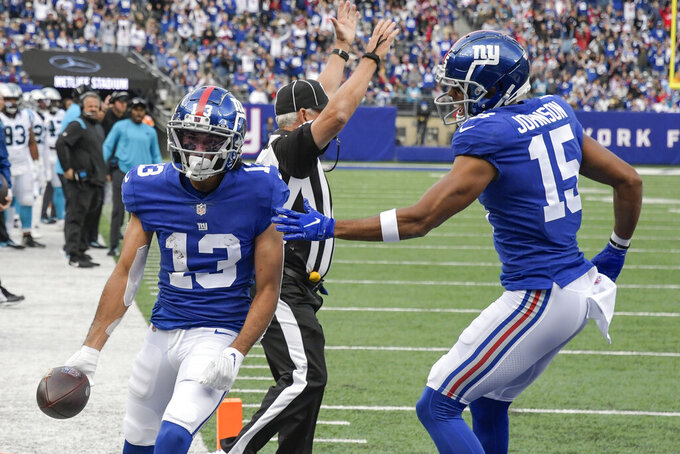 New York Giants' Collin Johnson (15) celebrates with Dante Pettis (13) after Pettis scored a touchdown during the second half of an NFL football game against the Carolina Panthers, Sunday, Oct. 24, 2021, in East Rutherford, N.J. (AP Photo/Bill Kostroun)

OPENING LINE: Kansas City by 10, according to FanDuel SportsBook

GIANTS PLAYER TO WATCH: DL Leonard Williams has sacks in three of his last four games, including 1 1/2 against the Panthers. The 27-year-old signed a $63 million, three-yea contract in the offseason to stay with the Giants, and he had been under scrutiny earlier in the year for not meeting expectations. But he is now third on the team with 39 tackles.

CHIEFS PLAYER TO WATCH: QB Patrick Mahomes is always worth watching, but it's usually because of the did-you-see-that kind of plays he makes. But this season, Mahomes has struggled behind a revamped offensive line and already has thrown nine interceptions while losing two fumbles.

KEY MATCHUP: Chiefs RB Darrel Williams has to produce against a porous Giants run defense if the Kansas City offense is to get on track. He's been the lead back after Clyde Edwards-Helaire got hurt, but he's combined for 26 carries and 82 yards the past two weeks.

STATS AND STUFF: Giants QB Daniel Jones has had 100-plus ratings in two of his three road games. He is aiming for his fourth straight Monday night game with at least 25 completions. His 229 yards rushing are third in the league among quarterbacks. ... WR Darius Slayton returned last week for New York after missing three games with a hamstring injury, and he had five catches for a team-high 63 yards. He has had two 100-yard games and two-plus TD catches in two of his last three on Monday night. ... Giants WR Dante Pettis caught five passes for 39 yards and a TD last week. He also threw a 16-yard pass to Jones on a flea flicker. ... Giants TE Evan Engram had season-high six receptions last week. ... The Giants and Colts are the only NFL teams to have a takeaway in each of their first seven games this season. ... CB James Bradberry got his third interception last week. J.C. Jackson of New England is the only other defensive back with at least three picks each of past three seasons. ... PK Graham Gano kicked field goals of 44, 49 and 53 yards against Carolina and was chosen NFC special teams player of the week. ... The Chiefs' four losses are equal to their total the past two seasons combined. ... Chiefs coach Andy Reid needs three wins to pass Curley Lambeau (226) for fifth in career regular-season victories. ... Mahomes already has three more interceptions (nine) this season than all of last season. He had the league's lowest interception rate in 2020. ... Mahomes is averaging 7.5 yards per attempt, a half-yard lower than any other season in his five-year career. ... Mahomes has thrown 35 TD passes with only seven interceptions in 12 starts against NFC teams. ... Chiefs TE Travis Kelce had eight catches for 109 yards in his last game against New York. ... WR Tyreek Hill has had five straight games with at least five catches for Kansas City. He has nine straight games at home with at least 50 yards receiving. ... Bolton led the Chiefs with 15 tackles and four tackles-for-loss last week against Tennessee.

FANTASY TIP: Keep an eye out for the final injury report Saturday and the inactive list 90 minutes before kickoff, because the Chiefs are bad enough on defense that Barkley, Golladay, Toney and Shepard are all worth putting in the lineup should they be available. Barkley has missed the past two weeks with his ankle injury.