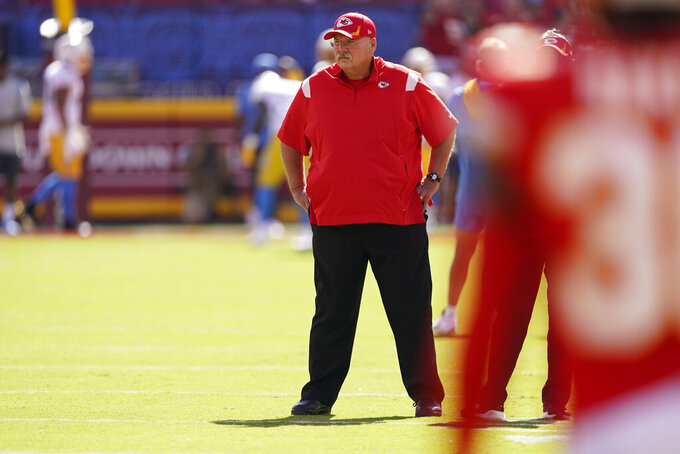 KANSAS CITY, Mo. (AP) — Kansas City Chiefs coach Andy Reid was back to work Wednesday as if nothing was amiss, three days after he was taken to the hospital with an illness and dehydration following a loss to the Los Angeles Chargers.

Reid was released from The University of Kansas Hospital on Monday and wasted no time getting back to the team facility on Tuesday, when the team typically goes through film reviews and begins preparation for the upcoming week.

That allowed Reid to move seamlessly into Wednesday, when the Chiefs have their most important full-squad practice of game week. They began putting in the game plan for Sunday's trip to Philadelphia, where they will try to snap a rare two-game skid against the team where Reid spent the first 14 seasons of his head coaching career.

“I'm feeling great first of all," Reid said. “It's good to be back and just getting on with business as usual here.”

The Chiefs declined to provide any information about Reid's health, and he was similarly effective in batting away questions on Wednesday. The 63-year-old coach doesn't have a known history of significant health issues, though he's spoken about in the past about losing weight and getting into better shape; he was using a cane over the summer.

“I'd probably just skip that. I'll just leave it,” Reid said of his health. “I'm not much for talking about all that stuff. I wish it had never happened. It did. I appreciate the doctors for taking care of me. They were phenomenal.”

Chiefs quarterback Patrick Mahomes said he was initially concerned about his coach's health in the moments after their 30-24 loss to the Chargers, when Reid had spoken to the team and then left Arrowhead Stadium for the hospital.

But he was kept apprised of Reid's health Sunday evening, along with other team leaders, and they in turn passed along any updates to the rest of the team. By the time Monday rolled around, Mahomes knew that Reid would be back soon.

Reid needs one more win to become the first coach with at least 100 with two franchises.

“I did (worry) in the sense you're obviously worried in general when stuff like that happens,” Mahomes said, “but they told me the scenario and what was going on and it wasn't a crazy situation. It was something they had under control, and they handled it. Then your emotions can kind of settle a little bit.”

Mahomes signed a 10-year extension worth about a half billion dollars last year, so he has a vested interest in making sure his coach stays healthy. Reid would be into his early 70s by the time Mahomes finished his contract.

“I know he loves this sport. He loves being able to coach,” Mahomes said. “If you’re doing something that makes you happy, it helps you live longer. I’m sure he loves doing what he does, and Tammy (Reid) will help him stay healthy.”

In other news, wide receiver Josh Gordon was on the practice field Wednesday for the first time since he was reinstated by the league and signed a free-agent deal with Kansas City. The plan is for the talented Gordon, whose career has been derailed by off-the-field issues, to spend the next couple of weeks getting up to speed.

At that point, the Chiefs hope to add him to the active roster and give Mahomes another playmaker on offense.

“We've got a great receiving room. This is just another addition to it,” Reid said. “He's been such a good player. Any time you can add a player like that — that quality — you do it. That's where we're at with it. We'll just see where it goes. I'm sure that it raises everyone's awareness. They know he's a good player. It's just getting back in the swing of things.”

NOTES: CB Rashad Fenton remained in the concussion protocol after getting hurt against Los Angeles on Sunday. ... DE Frank Clark did some work after missing the Chargers game with a hamstring injury. ... LB Willie Gay Jr. (toe) is eligible to come off the injured reserve list this week. “He's making great progress,” Reid said. “We'll just see with him.”