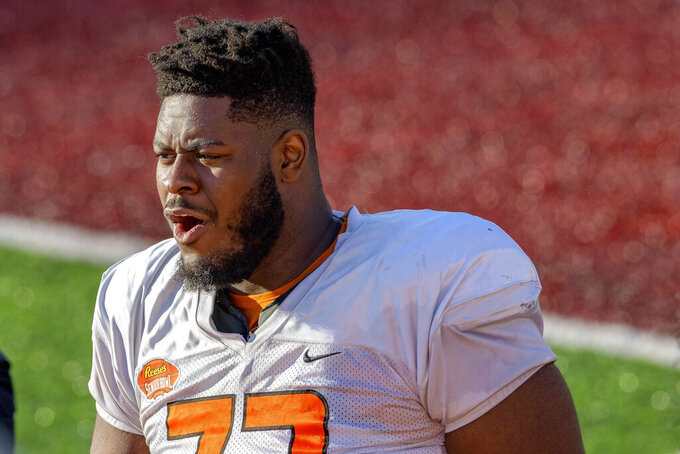 FILE - American Team offensive lineman Trey Smith of Tennessee (73) watches during the American Team practice for the NCAA Senior Bowl college football game in Mobile, Ala., in this Thursday, Jan. 28, 2021, file photo. Tennessee guard Trey Smith says he has no problem explaining his situation, even a million times if he must. He played college football while dealing with a condition that can cause blood clots, and Smith says it’s unique. But he wants to play in the NFL, so he has no problem detailing the plan his doctors and specialists put together allowing him to do just that. (AP Photo/Matthew Hinton, File)

KANSAS CITY, Mo. (AP) — One of the benefits of having so few holes to fill on a roster that has reached back-to-back Super Bowls: The Kansas City Chiefs were able to use late-round draft picks on high-upside medical gambles.

In the fourth round, they took massive defensive end Joshua Kaindoh, whose career at Florida State was interrupted first by hamstring problems and then a significant right leg injury in 2019 that caused him to miss all but three games.

In the sixth, the Chiefs took Tennessee offensive linemen Trey Smith, whose impressive on-field resume was tempered by blood clots in his lungs that may have led several other NFL teams to continually pass on him on Saturday.

If both can stay on the field, the Chiefs might have gotten the kind of steals that allow a winning team to stay on top.

“The board really fell to us the way we wanted it to,” said Mike Borgonzi, Chiefs director of football operations. “When you’re going through the process you’re obviously trying to get the best value for the players and also try to marry up value with need. I think we did a really good job of staying patient through the draft.”

The Chiefs filled their biggest needs in the second round, drafting middle linebacker Nick Bolton out of Missouri and center Creed Humphrey from Oklahoma. But they also were in need of an athletic pass rusher and offensive line depth.

That made Kaindoh and Smith perfect fits later in the draft.

Kaindoh, who put up impressive numbers at the Seminoles' pro day, could help the Chiefs deal with the loss of defensive ends Tanoh Kpassagnon and Alex Okafor to free agency. They still have Taco Charlton on a one-year deal and have toyed with moving defensive tackle Chris Jones outside, and that could allow Kaindoh to ease into professional life.

It also could give him time to prove he can stay healthy.

The 6-foot-6, 260-pound pass rusher has prototypical size, a massive wing span, and the natural ability that made him a five-star prospect coming out of high school. But all those injuries, coupled with coaching turnover at Florida State, kept Kaindoh from approaching his ceiling — something the Chiefs believe is quite high.

“Any time you get to the mid-rounds, you're looking for traits. That length, the explosion,” said Ryan Poles, Chiefs assistant director of player personnel. “Obviously we know the injuries have been documented, but we believe we can get the best out of him. We've got a great training staff and obviously again, you go back to our process: We went through it with our medical staff and they felt comfortable that we could get this guy to optimal performance level.”

Head trainer Rick Burkholder and team physician Dr. Mike Monaco must have given Smith the same green light, despite a draft process hindered by the COVID-19 pandemic that made typical examinations much more difficult.

Blood clots in his lungs kept him out of spring practice in 2018, and while blood thinners got him back on the field, Smith missed five more games that season when doctors worried he had a recurrence of clots.

Working with specialists and team doctors, Smith was able to get on the right series of medications to keep the clotting in check. That allowed him to start 12 of 13 games at left guard in 2019, when he was first-team All-SEC, and he was confident enough in his health and ability that he played each of Tennessee's 10 games last season rather than opting out.

“I’ve been in absolute perfect health. No issues at all,” said the 6-6, 335-pound prospect. “Just certain things happen for reasons. God always has a plan and intention for my life. And in terms of motivation, I'm always going to be motivated."

The immediate motivation? Make the team and show he can contribute.

The Chiefs have completely rebuilt their offensive line after its debacle in the Super Bowl, adding Humphrey to a mix that includes two-time Pro Bowl tackle Orlando Brown Jr., veteran guard Joe Thuney and former All-Pro Kyle Long. But the Chiefs learned the importance of depth last season, when injuries and opt outs left them with a decimated bunch to face Tampa Bay. That means Smith could have a chance to see the field next season.

“We knew it was a weakness for us and we went out and attacked it,” Borgonzi said. “Did we know we were going to be here at this point? I don’t know. Every phase that we go through, even when we leave the draft here, we’re going to constantly look for trades, waiver wire claims, guys on the street as free agents, and that goes for all the positions really. But certainly offensive line obviously was a priority for us, and I think we went out and we were aggressive with it.”