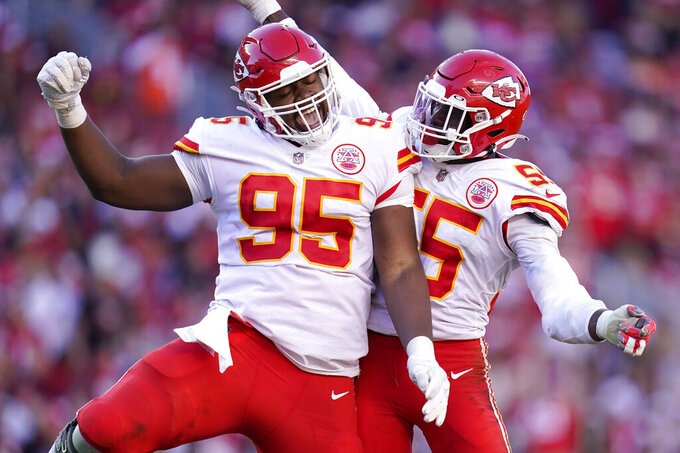 The league announced the suspension as the Chiefs (5-2) head into their bye week. He will miss games against the Titans and Jaguars and will be allowed back with the team on Nov. 14 in time for that week's game against the Chargers.

The three-time Pro Bowl pass rusher was sentenced to one year of probation and 40 hours of community service after he was arrested in March 2021, when he was pulled over while riding with another man in a vehicle that did not have a license plate. An officer noticed a weapon in the car and recovered two loaded firearms.

Three months later, Clark was pulled over for a code violation and officers discovered another gun in his vehicle.

The 29-year-old Clark has struggled with illnesses throughout the fall, and that's limited him to just 15 tackles and three sacks. That comes after a disappointing season in which Clark had 4 1/2 sacks, his lowest total since his rookie season.

The Chiefs, desperate to improve their pass rush after ranking among the league's worst last season, managed to rework Clark's massive contract in the offseason to keep him in Kansas City. He got a signing bonus of $4,550,000, a base salary of $3,725,000 this season and a roster bonus of $900,000, along with $75,000 for each game he is active.

Without Clark, the Chiefs will have to lean on first-round draft pick George Karlaftis and veteran Carlos Dunlap along with Mike Danna, who has struggled for several weeks with a calf injury but should be healthy after the bye. They also will need to get continued production from defensive tackle Chris Jones, who leads the team with five sacks.