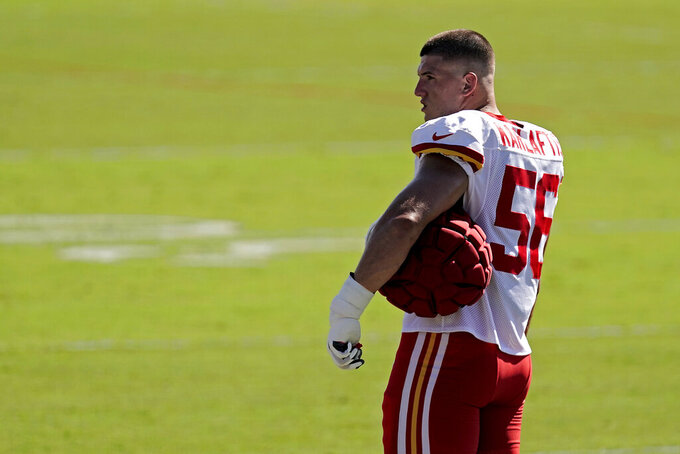 ST. JOSEPH, Mo. (AP) — The quickest way to the quarterback for a defensive end is usually the most direct route, and that may be why Chiefs rookie George Karlaftis is so adept at bulldozing his way through an unsuspecting offensive tackle and into the backfield.

Then again, perhaps it's because the route Karlaftis took to reaching the NFL was anything but direct.

The first-round pick out of Purdue grew up in Athens — not the one in Georgia, home to the Bulldogs, but the one in Greece, home to the Parthenon. His father, Matt, was an accomplished track and field athlete who had ventured to the U.S. to attend college, and while doing doctoral work at Purdue had met his eventual wife, Amy.

The two settled back in Athens, where Matt Karlaftis embarked on a career in academia, and where the family eventually grew to include four children. But the lives of all of them changed in June 2014, when their patriarch died of a sudden heart attack while on a work trip at the age of 44. Within a matter of days, Amy decided to move with her kids back to Indiana, where she settled in West Lafayette to be closer to family and her support network.

It was there that George Karlaftis, who had excelled at water polo and a myriad other sports in Greece, fell in love with the American version of football. He was in the eighth grade and, for a young man learning a new language, adapting to a new culture and trying to make new friends, the game gave him an opportunity to discover himself.

Now, a mere eight years later, the 21-year-old Karlaftis has reached the pinnacle of the sport.

“Looking back on it,” he said, “it's pretty crazy to think about. I feel like, more generally speaking, I've always excelled in sports to a certain extent. Football sort of came natural to me after I had a full year under my belt. I surely fell in love with it. Just looking back on it, I had a crazy, crazy ride. And just like the French say, ‘C'est la vie,' right? That's life.”

It has certainly been an interesting one. And in many ways, it's only beginning.

The Chiefs were better than just three teams in the NFL last season when it came to bringing down the quarterback, and they were unable to make a noteworthy splash in free agency until they signed veteran Carlos Dunlap midway into training camp. So instead, they spent one of their two first-round draft picks in an attempt to upgrade at defensive end.

Karlaftis was the fifth one off the board after a standout career at Purdue, but he fit perfectly with Kansas City.

“With a late start to football, he picked it up quick,” Chiefs general manager Brett Veach said, “and one thing in common in everyone that you talk to about George is approach to the game and how important it is to him.”

That's been evident through the first month of training camp. Karlaftis is often one of the first players on the field and one of the last to leave it, and not just because he's probably signed more autographs for fans than just about anyone.

Along the way, Karlaftis began spending time with veteran Frank Clark, who regularly puts in extra work after practice.

“George is dope. He's a dope rookie,” Clark said with a smile. "He listens, you know? And honestly, I love him. He's a favorite for me early, one of my favorite rookies ever. He wants to be good. He understands it's a different game. There's a different twist in the NFL. You have to be understanding that.

“The other day,” Clark recalled, “he asked about getting off the ball — I fly off the ball — and he's asking, ‘What are you looking at?' And I explained to him different keys. Then at the end of practice, I'm zoned out, looking at the sky, just had five plays in a row, and he came running over to me and he's like, ‘Bro!’ Scared me. He's like, ‘Bro! I did it! I did what you told me to do!’ I was like, ‘Oh, cool. Good stuff.’ But just the fact that he came over so excited was cool.”

Not always does such practice success translate on game day, but Karlaftis couldn't have had a better preseason debut than last Saturday in Chicago. He had two quarterback hits along with a tackle-for-loss and a sack.

“Everyone is helping in their own way,” said Karlaftis, who gets his first opportunity inside Arrowhead Stadium when the Chiefs play Washington in their second exhibition game Saturday. “We're trying to have the strongest group possible. But it's just little things about the game, little veteran intricacies, that are being passed down to me.”

The depth chart is fluid in Kansas City, where defensive coordinator Steve Spagnuolo is known for rotating so many players that it hardly matters anyway. But at least for now, Karlaftis is taking the shortest route he can to the top — just like he does when he's trying to chase down a quarterback in the backfield.

“He's a great kid,” Chiefs tight end Travis Kelce said. “A lot of love for the rook. He came in and knew the playbook, he's a true student of the game. He has a lot of heart and effort. I love playing with him. He brings the young dog out of me.”