Chiefs get younger with 9 of 10 draft picks making team 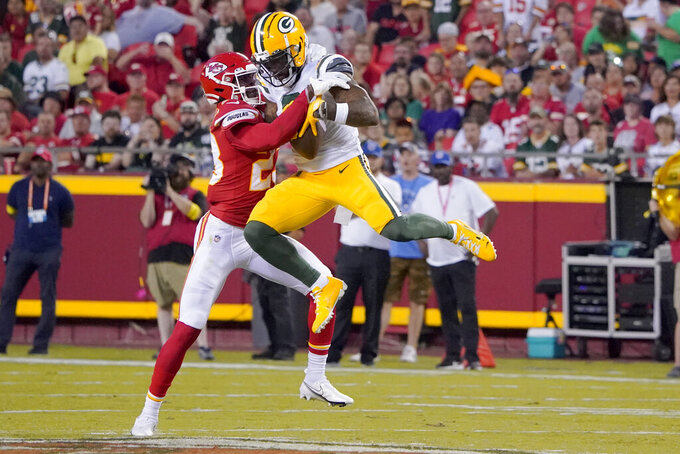 KANSAS CITY, Mo. (AP) — The Kansas City Chiefs wanted to get younger around quarterback Patrick Mahomes and the rest of their veteran core.

They couldn't have done it much better through the draft.

The Chiefs selected 10 players in April, their most in 14 years, and all but one made the final cutdown Tuesday for teams to reach the 53-man limit for the regular season. Some of them, such as first-rounders Trent McDuffie and George Karlaftis, were locks from the moment their names were read while others played their way onto a perennial Super Bowl contender.

That includes two seventh-round picks — the time of the draft when teams are typically throwing darts at the board in the hopes of landing a hidden gem. Defensive back Jaylen Watson and running back Isiah Pacheco made the team while safety Nazeeh Johnson, a candidate for the practice squad, was the lone draft pick to be cut.

McDuffie, who will start at cornerback, and Karlaftis, who could start at defensive end in the opener Sept. 11 at Arizona, join Watson in a young defense. Second-round pick Bryan Cook made the team at safety, third-round pick Leo Chenal carved out a role at linebacker and fourth-rounder Joshua Williams survived the cut at cornerback.

“Especially with the young guys, those guys — you can see the scheme is starting to click for them,” said linebacker Nick Bolton, the second-year pro who has taken over calling plays in the middle of the Kansas City defense.

Wide receiver Skyy Moore, the Chiefs' other second-round pick, will be counted upon heavily to help overcome the loss of Tyreek Hill in the passing game. And the one rookie that appeared to be on the fence after a rough training camp, fifth-round pick Darian Kinnard, was kept around as a developmental backup on the offensive line.

Suddenly, a team that had grown old during a streak of six straight AFC West titles is among the youngest in the league.

“I've never gotten caught up in how young or how old guys are. As long as they can play, I'm good,” Chiefs coach Andy Reid said. "I like this group. I like the way they went about business up in St. Joseph (at training camp) and then down here, we didn't have a big letdown when we moved back, which can happen with the young guys.

“It's a tribute to the veteran guys and also the scouting department for bringing these guys in.”

The Chiefs did keep a couple of intriguing veterans on the roster.

Ronald Jones II was largely an afterthought throughout much of training camp, often working with the third-string offense in team drills. But after Derrick Gore was placed on injured reserve, Jones proceeded to run for 53 yards on just eight carries in the Chiefs' preseason finale against Green Bay, and that was enough to earn a spot on the roster.

“I thought RoJo did a nice job down the stretch,” Reid said. “We know what he's capable of. It's a matter of him being comfortable in the offense. It looked like he was starting to get it down the stretch. He's done a good job.”

The news on cutdown day wasn't as good for Josh Gordon, the once-elite wide receiver that has spent most of the past year trying to rebuild his career in Kansas City. Gordon was let go along with 2016 first-round pick WR Corey Coleman and special teams standout Daurice Fountain, though there's a chance he could be signed back to the practice squad.

“I'm proud of Josh for all that he did,” Reid said. “There's a chance he's potentially back here if it doesn't work out somewhere else, but just from a football standpoint but also a bigger picture, he's done a heck of a job.”

NOTES: The Chiefs released a pair of veteran linebackers in Jermaine Carter and Elijah Lee, though the latter is expected to be a procedural move. The team expects to place tight end Blake Bell on injured reserve after hip surgery, but they must keep him on the initial 53-man roster. Once the Chiefs make that move, Lee is expected to be signed back to the team.