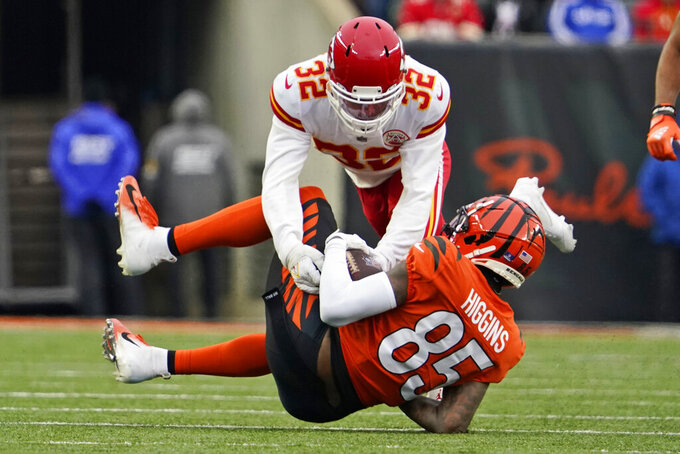 KANSAS CITY, Mo. (AP) — Tyrann Mathieu cleared the NFL's concussion protocol and the Chiefs removed his injury designation about three hours before kickoff, clearing the way for the Pro Bowl safety to play against the Bengals on Sunday in the AFC championship game.

Mathieu lasted only seven plays in the divisional round against Buffalo last weekend before taking a knee to the helmet from teammate Jarran Reed while tracking down Bills quarterback Josh Allen in the first quarter. Mathieu was examined briefly in the sideline tent, then headed to the locker room and did not return to the field.

The Chiefs had been optimistic all week Mathieu would play, though. He practiced fully each day, and the only hurdle left was to pass the league's rigorous testing protocol to play in Kansas City's fourth straight conference title game.

“I thought he did a nice job," Chiefs coach Andy Reid said this week. “He moved around well.”

The Chiefs also have one of their best defensive backs, Rashad Fenton, who missed their first two playoff games with a back injury. He practiced fully all week and did not appear on the final injury report.

Fenton was third on the team with seven tackles, and Mathieu had six, when Bengals quarterback Joe Burrow and rookie wide receiver Ja'Marr Chase torched the Kansas City defense in a 34-31 victory earlier this month.

Burrow threw for 446 yards and four touchdowns while Chase caught 11 passes for 266 yards and three of the TDs.

“Listen, we need all of our guys,” Chiefs defensive coordinator Steve Spagnuolo said. “It took us by surprise, obviously, when Tyrann got hurt early (last week). We did have a package we were going to do something a little different. Had to throw the thing completely out that we had especially for Buffalo. So, that set us back a little bit, but then it’s like we’ve always said, somebody’s got to step up and the guys did that.”

Both teams were relatively healthy with a spot in the Super Bowl on the line.

Defensive linemen Damion Square and Zach Kerr were active after both were added in the last 10 days.

Running back Darrel Williams, limited in practice, was back after missing last week's game with a toe injury.

“We're limiting him ourselves, not him limiting himself,” Reid said. "We just don’t want his toe to flare up. It’s been great so far, so we want to keep it that way.”