Chiefs head into Patriots showdown with ground game in flux 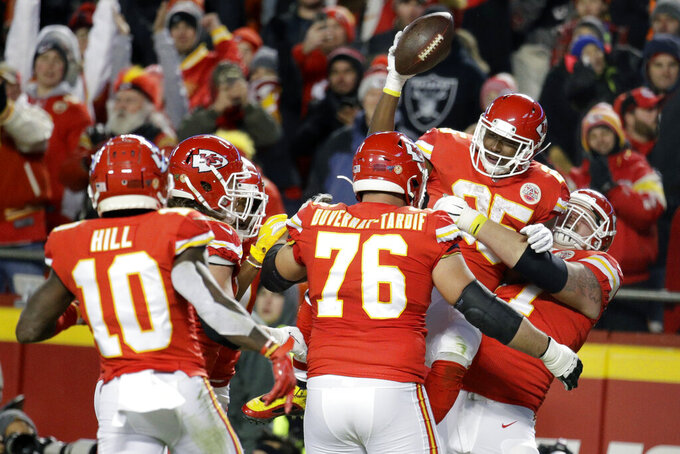 KANSAS CITY, Mo. (AP) — The Kansas City Chiefs will head into arguably their biggest game of the season Sunday in New England with the very real possibility that their leading rusher could be a running back that joined the team just a few days ago.

Not that it seems to make much difference for them.

For all the high-flying, record-setting performances by quarterback Patrick Mahomes and the Kansas City offense, the one thing that has been missing for the better part of two years is a consistent ground game. The Chiefs have cycled through numerous running backs, tried wide receivers on jet sweeps and end-arounds, and even utilized Mahomes on scrambles and bootlegs, all with the same underwhelming results.

Now, the Chiefs visit the Patriots in a rematch of their riveting AFC championship game without two of their leading rushers, Damien Williams and Darrel Williams, and Spencer Ware back in the fold after signing earlier this week.

“They all practiced and took rotation in there,” Chiefs coach Andy Reid said. “I can tell you we're comfortable with any of them playing. We're going to see how it goes once the game gets going.”

That is basically the approach the Chiefs have taken all season.

Without a running back such as Saquon Barkely or Ezekiel Elliott, the Chiefs have fully embraced the committee approach. They've had five different leading rushers through their first 13 games, including Mahomes in a win over the Chargers in Mexico City. It was Darwin Thompson, a sixth-round pick, who led them last week against the Raiders by piling up yardage in the fourth quarter, when the Chiefs were salting away an important AFC West victory.

The Chiefs have had only one running back eclipse 100 yards in a game -- Damien Williams ran for 125 against the Vikings. But even that performance came with an asterisk: He gained 91 yards on one spectacular touchdown run.

Offensive coordinator Eric Bieniemy insisted this week the Chiefs are comfortable with anybody they put in the backfield, in part because of the guy handing off the ball. The Chiefs run plenty of run-pass options, so it falls upon Mahomes to decide whether the running back is going to get the handoff. And that means it falls on the reigning league MVP to decide whether McCoy, Thompson and Ware will have much success against the Patriots.

It's certainly a unique trio to take into a game.

McCoy could be headed for the Hall of Fame after a spectacular career spent mostly with Buffalo. He signed with the Chiefs just before the season and has led them in rushing six times, but he's also had a couple of fumble problems and didn't have a single carry against the Colts. The Chiefs are also trying to limit the wear and tear on his 31-year-old body so that he's healthy for the stretch run, and that has meant fewer carries the past few weeks.

Thompson showed in training camp what he can do when the ball is in his hands. But the former Utah State standout needed time not only to learn the Chiefs offense but sharpen his skills when the ball is not in his hands: pass protection, picking up blitzes, reading coverages and running routes in the passing game.

It came together in the fourth quarter against Oakland last week, when Damien Williams was inactive with a rib injury and Darrel Williams had left with a hamstring that put him on injured reserve this week. Thompson wound up carrying 11 times for 44 yards and reached the end zone for the first time in his NFL career -- then he dropped the ball in the end zone, forgot about it, and was thankful fullback Anthony Sherman grabbed it for a keepsake.

“I like to think that I'm one of the official presidents of the Short Running Back Club. So with (5-foot-8) Darwin being in that Short Running Back Club, obviously I have high expectations of him,” Bieniemy said. “He has a dynamic personality and has great work ethic. So yes, he will be given an opportunity at some point.”

So will Ware, who spent several years with the Chiefs but went unsigned this season. The Chiefs' spate of injuries forced them to bring in another body, though, and Ware's familiarity with the offense made him a natural fit.

“Spencer is real smart. The retention part wasn't really a big deal,” Reid said. “He picked up right where he left off. It was just a matter of getting the legs going and getting back in the swing of things.”

The Chiefs still harbor hopes of winning the No. 1 seed in the AFC, and with it a first-round bye and home-field advantage throughout the playoffs. But winning at New England on Sunday is essential, and cold weather combined with the Patriots' second-ranked pass defense means a successful ground game could be imperative.

Whoever happens to be carrying the ball for the Chiefs.